To mark International Women’s Day, British Airways hosted a special all-female flight, with more than 60 women taking part from the ground team to the cockpit. 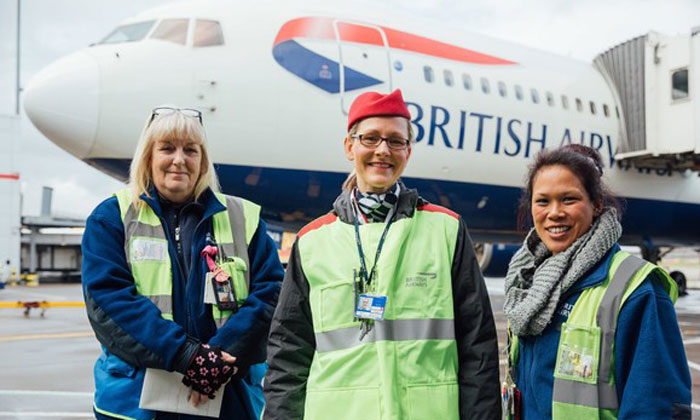 INTERNATIONAL WOMEN'S DAY: Every team member of BA1484 from Heathrow to Glasgow was female

British Airways have showcased the skills and experience of women in its employ by hosting the UK’s biggest ever all-female flight.

BA1484 from Heathrow to Glasgow on Monday March 5 brought together more than 60 women in roles including baggage handlers, pilots and cabin crew, flight managers, loaders and push back teams, security, check in and airport teams. There were even two teenagers on work experience in the terminal, helping with the flight. Together there were 61 women who ensured the flight with 204 customers departed on time.

Customers travelling on British Airways’ short-haul flights on International Women’s Day were able to watch a video as part of the in-flight entertainment showing the all-female team in action. See video here:

Getting a behind-the-scenes view of what goes into every flight were seven young women, aged between 16 and 18, who were joined by pilot and TV star, Carol Vorderman. The young aviation-enthusiasts said they had been inspired by the experience.

Amy Charlton – Chenderit Sixth Form, Middle Cheney in Oxfordshire said: “The whole day had such an exciting atmosphere to it, a real buzz! I thoroughly enjoyed meeting so many of the women involved, I didn’t realise there were so many careers to choose from. The female pilot even let me sit in the left hand seat with the captain’s hat on, hopefully one day that will become a reality for me.”

The students, who have all previously completed work experience placements with British Airways, watched as the all-female team prepared the aircraft for departure, with women loading bags into the aircraft hold, undertaking engineering and safety checks and finally pushing back the 767, so that it could taxi to the runway.

British Airways Ramp Manager, Joanne Kershaw, said: “So many people think the jobs on the ramp, under the wings of aircraft, are just for men. I loved being part of a team of women at the top of their game, working all together for the first time on one flight, to get it ready and away on time for our customers.”

March 8 was also the anniversary of the first woman to receive a pilot’s licence. One hundred and eight years after Elise Raymonde Deroche’s milestone achievement, British Airways had three female pilots in the cockpit for its special flight. Cameras in the cockpit offered a bird’s eye view of their take off from Heathrow and landing into Glasgow Airport, and captured their conversations with the three female air traffic controllers who guided them out of Heathrow airspace.

British Airways Captain, Julie Levy, said: “I’m incredibly proud to have been a part of the team on our all-female flight.

“As a mum of two teenage daughters I think it’s crucial that we grab every opportunity we can to inspire the next generation. There wasn’t any visibility of female pilots when I was growing up, so I think events like this are important to help show the range of different careers that are available to women. I’m proud to be part of an organisation doing something about that.”

Carol Vorderman was the among the first off the flight, greeted with a hug by British Airways’ Glasgow Airport manager, Phyllis Stuart, who has just marked her own career milestone: a quarter century at the airline.

She said: “What an incredible day, I loved getting a sneak peek behind-the-scenes at British Airways and meeting all the amazing women who, like me, have such a passion for encouraging more young women into aviation. Spending the day with the students was great fun, they’re all so enthusiastic and they’ve got a wonderful future ahead of them. The world, or plane, is theirs for the taking.”