LA-based Tutor Perini is the managing partner on a joint venture with Parsons Transportation Group Inc to design and build a new terminal at Newark Liberty International Airport. 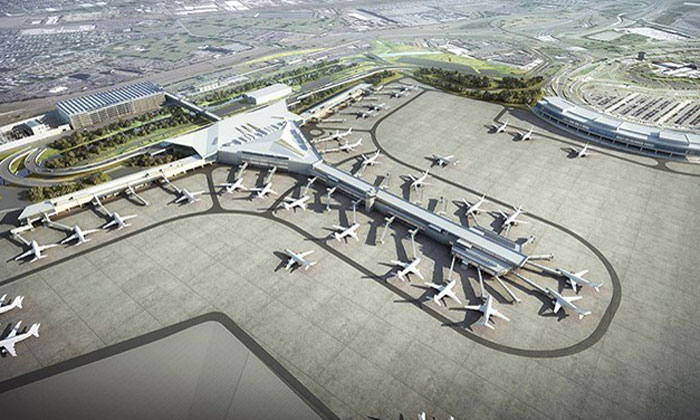 COMING SOON: A 3D rendering of the project

Civil building and speciality construction company Tutor Perini has announced that the Port Authority of New York and New Jersey has approved the award of a fixed-price contract valued at approximately $1.41 billion to the Tutor Perini/Parsons joint venture for the one-million-square-foot Newark Airport Terminal One Design-Build Project.

The project is part of a major redevelopment and modernisation program that will, according to the building firm, position Newark Liberty International Airport to meet the needs of the 21st century. The project will be the largest transportation infrastructure design-build contract in New Jersey state history.

Aside from he new 33-gate common use domestic terminal, the Terminal One Redevelopment program also will provide a more efficient roadway network and create parking for about 3,000 vehicles.

“There has been a continuous surge in the number of passengers at Newark Liberty, which last year welcomed more than 40 million of them,” said Port Authority Chairman Kevin O’Toole.” This board action advances our commitment to address the growing needs of our travellers, which cannot be adequately met by the current Terminal A.”

“Nearly $12 billion in our current 10-year Capital Plan is committed to modernising our airports,” said Board Vice-Chairman Jeffrey Lynford. “With today’s vote, we move towards the next phase of the Terminal One Redevelopment project to deliver a world-class terminal with 21st-century passenger amenities.”

Tutor Perini is the managing partner for this joint venture. Work is expected to begin in April 2018 and substantial completion is anticipated in 2022. The contract value is expected to be included in the company’s first-quarter 2018 backlog.

Additionally, the board authorised agency officials to enter into new lease agreements with the airlines expected to operate in the new terminal.