A first for German airports, Josie Pepper’s brain is based on IBM Watson technology, a question and answer computer system specifically developed to answer questions from the quiz show Jeopardy. 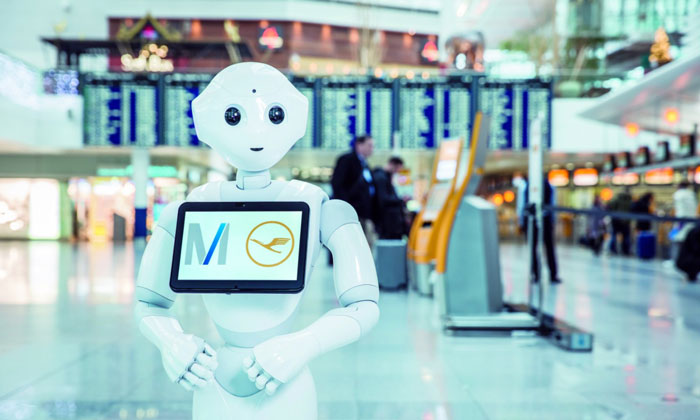 JOSIE PEPPER: The robot was named by staff at Munich Airport

Passengers at Munich Airport will have an unusual welcome when they arrive at Terminal 2. From today, Josie Pepper, a 120-centimetre tall robot will be on hand to greet them and answer questions.

The innovation is a joint Lufthansa-Munich Airport project. It is the first-ever test of a humanoid robot equipped with artificial intelligence at a German airport.

For the next few weeks, Josie Pepper will welcome travellers to the non-public area of Terminal 2, which is jointly operated by Munich Airport and Lufthansa. In her initial deployment, Josie Pepper, who speaks English, will await passengers at the top of the ramp leading to the shuttle connecting the main terminal to the satellite building. This test phase will be used to show whether Josie Pepper is accepted by passengers.

Josie Pepper’s “brain” contains a high-performance processor with a WLAN internet access. This creates a connection to a cloud service where speech is processed, interpreted and linked to the airport data. What sets the system apart: When this robot type speaks, it does not just deliver pre-defined texts. With its ability to learn, it answers each question individually. Just like a “real” brain, the system gets steadily better at combining questions with the relevant information to provide more precise replies.

IBM Watson Internet of Things (IoT) cloud-based, artificial intelligence technologies are behind Josie Pepper’s capabilities. Pepper was developed by the French company SoftBank Robotics. The lady robot was given the name “Josie” by the staff of Munich Airport and Lufthansa when she arrived at the airport.

Other airports around the world have already welcomed robots similar to Josie. In December 2016, Glasgow became the first UK airport to try out the technology with it ambassador GLAdys. A year earlier, Schiphol’s SPENCER, a pilot scheme designed to aid passengers through the airport terminal developed by Örebro University in Sweden.