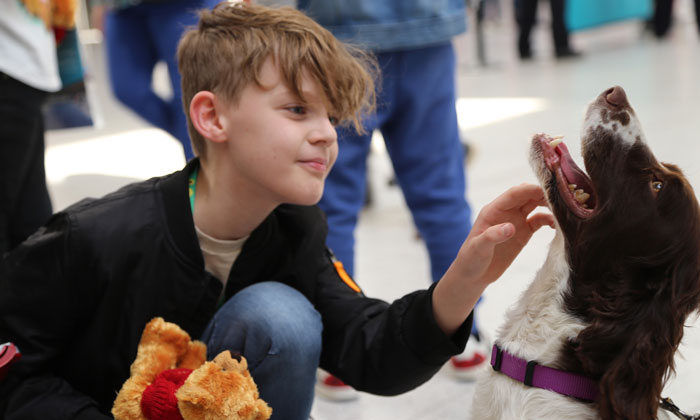 Over 30 local families attended the event designed to give children and adults with autism, their carers and families, an overview of airport processes before they travel.

Travelling through an airport can be a challenge for people affected by autism and the event in the North Terminal allowed families to ‘check in’, ride on assistance buggies, meet trained security dogs and the police, watch the x-ray machines in action and talk with staff about travelling with autism.

Gatwick is the UK’s first officially recognised Autism Friendly Airport and representatives from across the airport attended the event, including Gatwick’s Autism Champions, staff from airlines such as Virgin Atlantic, Gatwick’s security and special assistance teams, the police, the fire service and immigration officials.

Autistic people often see, hear and feel the world in a different, more intense way, which can mean they feel overwhelmed by ‘too much information’ when out in public. Travelling through an airport can be a particularly apprehensive experience.

Anyone who requires assistance when travelling through Gatwick is encouraged to contact the airport’s special assistance team or their airline.

“I am so proud to be Gatwick’s Autism Ambassador and to play a part in the airport’s Hidden Disability Assistance Programme and official Autism Friendly accreditation.  I hope to see other UK airports follow Gatwick’s lead and establish official autism-friendly programmes of their own.

“The number of people in organisations across the airport who have volunteered their free time to be part of the awareness day has been overwhelming, from those working for airlines and security, to the emergency services, special assistance and terminal teams.  Across the board everyone involved wants to pro-actively improve their provision for people with Autism.

“It has been a mammoth team effort behind the scenes to make this day happen and I would like to thank everyone involved.”

The news comes in light of Shannon’s unveiling of their new sensory room.