The hall – which will be used by around 2 million passengers each year – is Schiphol’s response to the major growth in the number of passengers travelling to Schengen destinations. 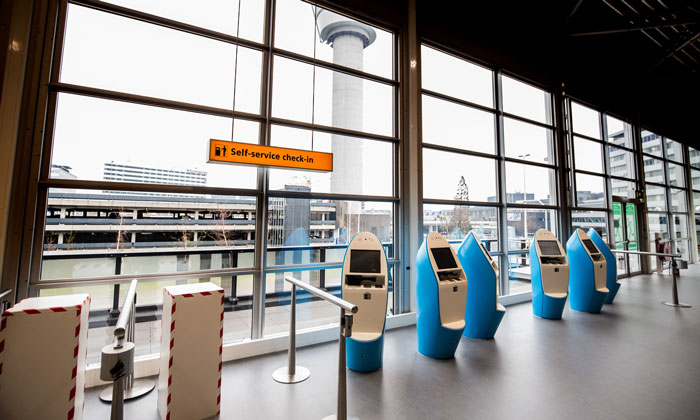 Outgoing State Secretary Sharon Dijksma (Ministry of Infrastructure and the Environment), together with Jos Nijhuis, President & CEO of the Royal Schiphol Group, has opened the Temporary Departure Hall at Amsterdam Airport Schiphol. With this expansion of check-in and security capacity, the airport aims to continue offering a good service over the coming three years.

‘I’m enormously proud of the fact that we have completed this departure hall in little more than six months. Day in, day out, we have worked really hard with all our partners to get the hall up and running in time for the coming spring and summer peak. And that was necessary, too – because things will be very busy. In fact it will already be starting in two weeks from now, around Easter’, says Nijhuis, who saw the number of Schengen passengers increase by no less than 17% in 2016.

The hall offers the airlines space for checking in passengers and their baggage. The new departure hall, which has an area of around 4000 m², has 22 check-in desks, six security lanes, self-service check-in kiosks, sanitary facilities and seating. The Temporary Departure Hall has been built on the roof of the South Baggage Hall and linked by means of a corridor to the existing Departure Hall 1. The new hall bears the name Departure Hall 1 – check-in desk row 1A.

KLM, Lufthansa Group (Lufthansa, Austrian Airlines and SWISS) and LOT Polish Airlines will be using the hall, and the first passengers will be departing from here on 4 April. It is planned that the Temporary Departure Hall will remain in service until the end of 2019 when, once the period of use comes to an end, it can simply be dismantled and re-used. The security filters can also be used at other locations later.

Jos Nijhuis: ‘Our challenge for the coming years is to keep quality and capacity at the requisite level. This is why we have begun creating extra capacity for the long term, for instance by building a new pier and terminal.

“That’s a major investment, which also forms the basis for further growth in capacity. We are also further developing the railway station zone as well as landside infrastructure such as roads and parking facilities. With our investments we aim to strengthen, improve and increase our infrastructure, quality and accessibility.’