EUROCONTOL’s latest data snapshot demonstrates how the unprovoked invasion of Ukraine has brought the country’s commercial flying to a standstill, and stopped overflights of neighbouring Moldova. 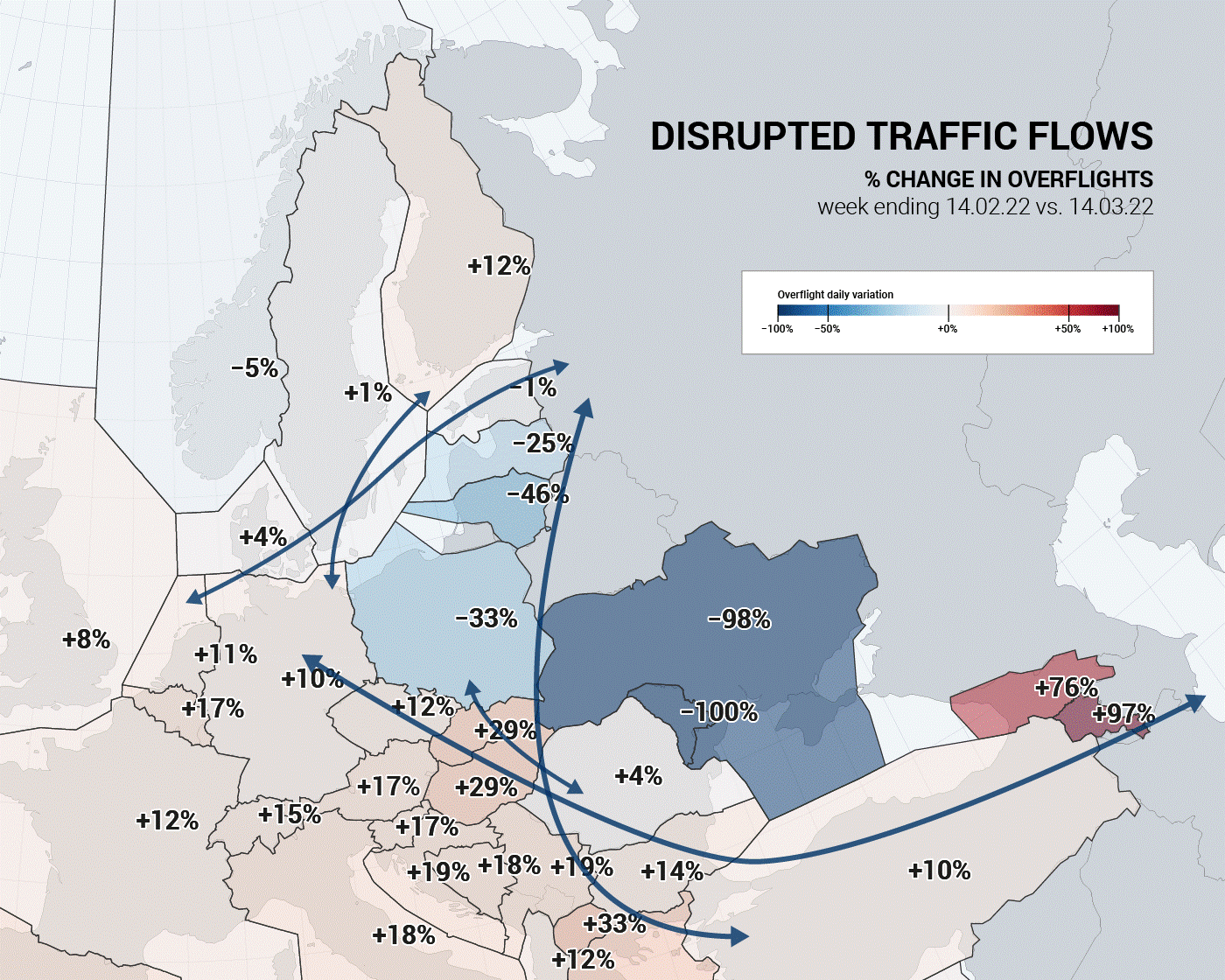 The unprovoked invasion of Ukraine has brought commercial flying there to a standstill, and stopped overflights of neighbouring Moldova. Elsewhere around the borders of Ukraine, Russia, and Belarus, overflights are also much disrupted. EUROCONTROL explores the changes in overflights between mid-February 2022, before the invasion, and mid-March 2022. We take Lithuania and Hungary as examples to illustrate what is happening more widely.

Lithuania has lost nearly 200 overflights per day (-46 per cent). More than half of this reduction (~110 flights per day) is because flows to and from Russia, particularly from Germany, France and the UK, have stopped. Poland, Latvia and many others have fewer overflights for the same reason.

Flights between Turkey and Russia continue, but reduced by about 30 per cent. However, Lithuania has gained about 18 flights per day on this flow, since they are keeping further West to avoid Belarus. This limited increase is more than offset by reductions in overflights to and from Asia, also because Belarus is closed. Flights between Germany and China are actually up by 10 per cent, but European carriers are routing South, through Georgia for example, and non-European carriers still using Russian airspace are keeping further North, passing through Estonia and Latvia rather than Lithuania, which is losing 25 overflights per day to and from North-East Asia and 20 to and from South and South-East Asia.

The remaining reduction for Lithuania is due to shorter-haul flights, such as Finland and Estonia to Germany, keeping further West, away from the Kaliningrad exclave, thus moving 18 daily overflights from Lithuania to Sweden.

Hungary’s 29 per cent increase in overflights (290 per day) owes much to the re-routing of flows to Asia and the Middle East further South, but that accounts for about a third of the change (100 flights per day). Flights to and from Romania have grown significantly in the last month, adding about 70 flights per day for Hungary; this is mostly ‘organic’ end-to-end growth rather than re-routing.

Other, smaller overflight gains for Hungary include the Turkey to Russia flow mentioned earlier, plus other Scandinavian and Baltic flows that are now avoiding Ukraine.

How the war in Ukraine is impacting European aviation and airspace