The new facility will provide electricity and heat for Edmonton Airport’s operations from the same source, which will significantly lower the airport’s carbon emissions and reduce costs. 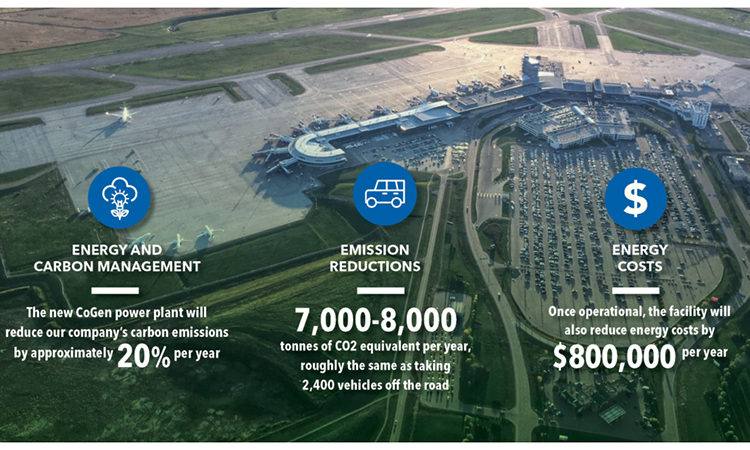 Edmonton International Airport (YEG) is continuing its commitment to environmental sustainability by powering up a new natural gas cogeneration facility that will significantly lower carbon emissions and reduce costs.

Construction of the new facility began in 2019 before becoming operational in spring 2021. It provides electricity and heat for airport operations from the same source: the heat from electrical power generation is now captured and used to heat water, which heats the Edmonton Airport terminal.

The new cogeneration power plant will reduce Edmonton Airport’s annual carbon emissions by approximately 20 per cent (or 7,000 to 8,000 tonnes of CO2 equivalent) per year, roughly the same as taking 2,400 vehicles off of the road. Once fully operational, the facility will also reduce YEG’s energy costs by roughly $800,000 per year.

The project, brought forward by airport employees, is another tangible example of Edmonton Airport’s commitment to environmental, social and governance concerns. The implementation of an energy and heat production facility onsite is a direct response to the desire for real, lasting and sustainable change in the aviation sector.

“We’re pleased to announce the installation of our cogeneration plant, as it will offer critical reductions in CO2 emissions for our YEG airport sustainability campus. We couldn’t have done it without our partners, the Government of Alberta and ATCO, and we’re thankful for their support. Our company is committed to being carbon neutral by 2040 under our commitment to The Climate Pledge, and this new cogeneration facility goes a long way to helping us to get closer to that goal by reducing our current emissions by 20 per cent,” said Tom Ruth, President and CEO of Edmonton International Airport.

Other examples of how Edmonton Airports (EA) – the manager of YEG – is working towards carbon neutral growth include: