The remodelled areas evoke a greater sense of identity and belonging to the city of Quito, whilst also providing greater comfort to the airport’s passengers. 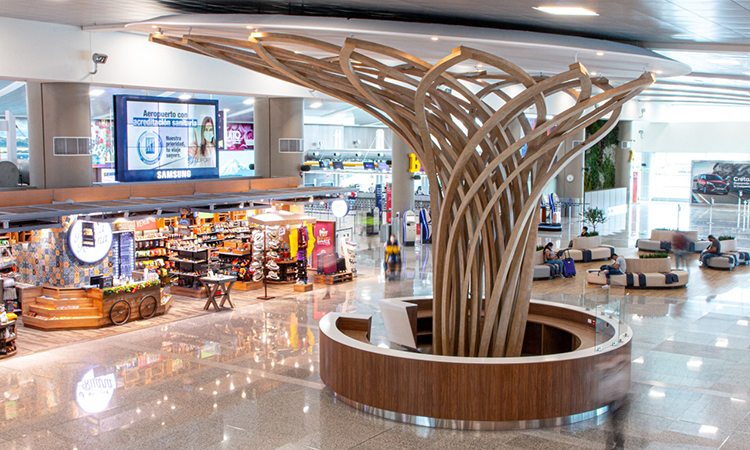 Mariscal Sucre International Airport (UIO) in Quito now boasts a renewed image in its public areas thanks to a comprehensive remodelling of the departure and arrival halls of the passenger terminal, a work undertaken by Corporación Quiport as part of its improvement plan. The project benefitted from an investment of $2.18 million, financed by Quiport and its shareholders. More than 90 contractors worked directly on the project.

Through materials (stone, wood and gardening), textures and design concepts, the renovated public areas now offer an ‘avant-garde’ image and, at the same time, a greater sense of identity and belonging to the city, while providing greater comfort to users and passengers. For the execution of the project, Quiport partnered with Stantec (Canada), Adriana Hoyos Design Studio, Octofast and InStudio (all from Ecuador) – prestigious companies with expertise in multiple areas, such as airport design, interior design and decoration and construction, among others.

The works began in December 2019, however, they were then halted in March 2020 due to the international COVID-19 health crisis. Once construction activities in the country were authorised, Quiport decided to resume construction and complete the work, since it had already been budgeted.

The remodeling included the replacement of 5,250m2 of ceramic floor with Brazilian granite. In addition, all of the seats were replaced with pieces of furniture specially designed for the airport, with space for 148 people in total. A fundamental part of the design of the public departure hall is the relocation of the commercial stores to the sides of the area, amplifying available area for circulation and providing an effect of spaciousness.

Gardening is one of the new elements that has been integrated into the public arrivals hall. Shrubbery incorporated into the novel seating and vertical gardens, placed in the awnings that separate the hall from the check-in areas, offer a feeling of freshness to the entire space. Numerous species of plants native to Quito were used in these hanging gardens, including fern, amaranth, rabbit’s ear, gardenia leaves, ivy and eucalyptus, among others.

For Adriana Hoyos, Director of Adriana Hoyos Design Studio, the challenge was to create a ‘wow effect’ in the renewed space, in which the passenger has a unique, comfortable and memorable experience with decorative elements that break the scheme of a typical commercial place. “We selected the materials based on their warmness and safety for passenger traffic, but without forgetting a great visual impact,” said Hoyos.

Cecilia Einarson, from Stantec, explained that the objectives of the remodelling were to provide a more open, efficient and modern space that represents the identity of Ecuador’s culture. In this sense, the architectural design that was developed gave the opportunity to create spaces by reconfiguring the self-check kiosks, relocating the commercial stores and rest areas.

“We had the privilege of executing the remodelling work. A difference with working on other types of projects is that the airport is a living space, full of movement at all times. In addition, complying with Quiport’s strict safety standards, which are the highest in the city,” said InStudio’s Manager, Claudia Guerrero.

One of the main elements of the remodelling was the creation and construction of a sculptural element in the centre of the public departures hall. It is a latticework of wooden pieces that start from a central point that opens in all directions. The use of wood gives it a unique warmth and versatility that could not have been achieved with any other material. The piece has a height of 7.2m and is constructed with local balsa wood from sustainable forests.

The design evokes concepts such as the connectivity that an airport generates, connecting the city with the whole world, but also represents the feeling of every person who goes on a trip: The beginning of an adventure to discover new places, the beginning of a business, of studies and even of a new life. That is why this element has been named ‘The Origin’.

The design was submitted by Stantec and the company in charge of planning, modeling and construction of the work was Octofast. Roberto Wolf, from Octofast, explains that the main challenge was to go from a conceptual design to a constructible design, for which tests were carried out with different types of materials. Everything was done by Ecuadorian engineers, draftsmen and manufacturers with indigenous material.

“I want to congratulate Quito International Airport for all of the works implemented and thank all the companies involved that allow the correct operation of our airport. This is yet another example of how public-private alliances are very important for the productive development of the city. We will continue working in favor of Ecuador’s aviation,” said Sandro Ruiz, manager of the Metropolitan Public Airport Services Company (EPMSA).

“One of the parameters that Skytrax evaluated to grant Quito Airport the five-star category was this construction project and the positive impact that it will have on the passenger experience”, said Andrew O’Brian, President and CEO of Corporación Quiport, who additionally thanked the commitment of everyone involved in the remodelling: The companies for their efforts, the authorities of the city for the agility in approvals and permits, and Quiport’s Engineering, Operations, Commercial and Finance departments, who all took part in the integral management of the project.

“This project required very high levels of planning between our team and contractors and, in the end, we have delivered an infrastructure of the highest quality for the provision of first class services, honouring the commitment that Quiport has towards the city and country,” concluded O’Brian.