The contract will involve the planning and design of the international departure lounge in Beijing Capital International Airport’s Terminal 3. 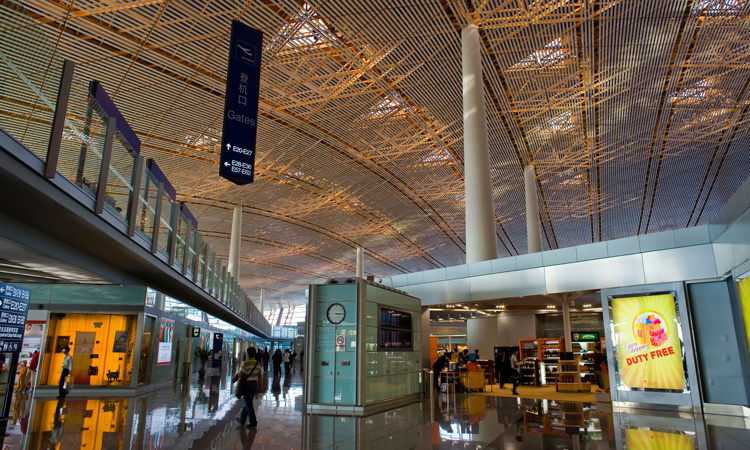 Beijing Capital International Airport (PEK) has announced that it has appointed The Design Solution (TDS), a specialist airport design consultancy, to redevelop the commercial planning and design of the international departure lounge at the airport’s Terminal 3.

Since its launch in 2008 as the second-largest terminal building in the world, Terminal 3 at Beijing Capital International Airport has been an iconic symbol of the innovation and growth of the Chinese travel market.

Handling over 100 million passengers in 2019, the airport has grown steadily since its launch, but the gradual migration of traffic to the new Beijing Daxing International Airport (PKX) – which was opened in October 2019 – has created an opportunity for a bold re-configuration of the departure lounge area.

Assistant Manager of Market Development at Beijing Capital International Airport, Lui Li, outlines the vision behind the Terminal 3 project: “As traffic continues on its long-term growth pattern, it is crucial that we ensure we continue to innovate and provide our passengers with a premium quality airport experience, as demonstrated by our recent repeated success in the Airports Council International (ACI) ASQ awards. This extensive re-configuration and re-design expresses our commitment to the passenger experience in retail and food and beverage, and will drive significant new revenue opportunities for the airport including our retail partners, China Duty Free Group.”

The development project aims to drive a stronger commercial performance through a significant expansion of the total commercial space in Terminal 3 – from 11,264m2 to over 13,000m2 – and the creation of a radically updated retail experience for the terminal’s departing passengers.

In particular, the re-planning will address the fact that the central commercial areas are surrounded by shops but have very large central island units. The reconfiguration will create better retail positioning and enhance the passenger flow through the space, expanding passenger exposure to the retail offer.

The project plan will integrate a unique interior design with innovative technology, building on the current two ‘historic’ gardens and fountain while creating a sense of place through sharing the culture and spirit of China, old and new. The holistic design will integrate a series of environmental elements and communicate an authentic expression of the human history and dynamic spirit of the extraordinary capital city.

Robbie Gill, Managing Director of The Design Solution, said: “Designed by Naco, Arup and Foster+Partners, Terminal 3 at Beijing Capital Airport is one of the most iconic terminals in the world, and it is a great honour to be selected to re-imagine, re-plan and re-design this soaring space.”

Gill continued: “The commercial areas were originally planned nearly 20 years ago and, in that time, the world of airport retailing has moved forward dramatically. In particular, the importance of luxury brands, particularly in China, has become ever more important at the heart of the retail experience. Eating and drinking has also become a much bigger imperative for the region’s travellers. The airport wants to take the opportunity of the reduced traffic passing through the airside space – due to the migration of passengers to Daxing – to transform the terminal experience ready for further growth in the future. We will be creating a new powerful vision and transform the space to maintain BCIA’s pioneering position among the world’s leading airport experiences.”

Designing airport terminals to be dementia-friendly