A fleet of three full-electric buses will operate the 24-hour passenger service between Glasgow Airport’s terminal and the long-stay car park. 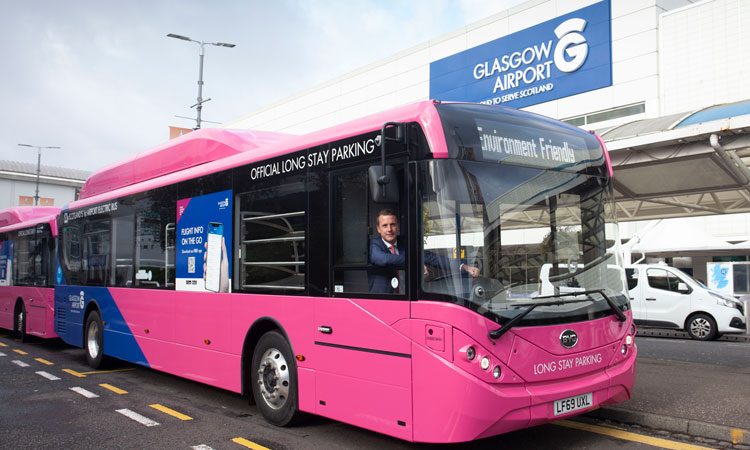 Glasgow Airport has introduced a fleet of zero-emission electric buses to its car park operation – the first airport in the UK to do so.

The three-strong fleet of all-electric battery buses will replace the current diesel fleet used to shuttle passengers between the terminal and the airport’s long-stay car park.

This is the first time the BYD ADL Enviro200EV model has been operated anywhere in Scotland and its introduction at Glasgow Airport was made possible thanks to a £450,000 Green Bus Fund support grant from Transport Scotland.

“Moving to a full-electric bus operation cuts the carbon emissions associated with passenger travel to and from our car park from 143 tonnes per year to zero, and this significant reduction is further supported by the fact that the airport’s electricity is also supplied via renewable energy,” commented Mark Johnston, Glasgow Airport’s Managing Director.

“The environmental benefits and considerable cost reductions associated with the introduction of these electric vehicles was very attractive.”

The introduction of the new full-electric bus fleet is one of a number of projects introduced to help reduce Glasgow Airport’s carbon footprint. Earlier in 2019, the airport invested £200,000 to deploy eight petrol/electric plug-in hybrid Mitsubishi Outlander PHEV 4×4 vehicles across its airfield operations.

Glasgow Airport, as part of the AGS Airports Ltd group which owns and operates Aberdeen and Southampton airports, also made a commitment to Airports Council International (ACI) Europe’s NetZero 2050 this month.

A joint project between Alexander Dennis Ltd (ADL) and BYD Europe, the new zero-emission fleet has been specially adapted to suit Glasgow Airport’s operational requirements. Charging infrastructure for the three buses has also been installed.

The launch of the new electric fleet coincides with Scotland’s Climate Week 2019. Events are being organised in schools, colleges and workplaces across the country to encourage people to take action to reduce greenhouse gas emissions.