How does Helsinki Airport weather the storm?

In Finland, there is nothing exceptional about harsh winter conditions. With snow typically covering the Helsinki region for almost a third of the year, we need to overcome the challenges of the constantly changing winter weather, explains Kimmo Mäki, President and Chief Executive Officer of Finavia. 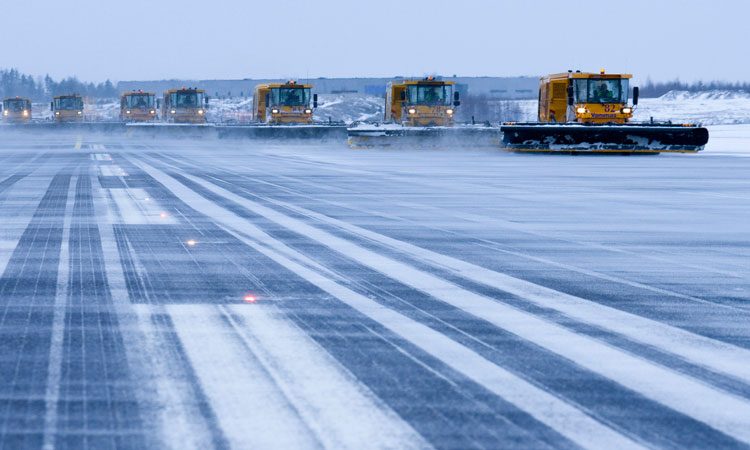 YEAR-ROUND air traffic at Helsinki Airport is only possible thanks to comprehensive snow know-how, or, ‘snowhow’. We even have a saying in our work community that, for our runway maintenance, winter lasts 12 months a year. This means that, in order to be successful, winter maintenance skills must be sustained even through the warmer months.

What helps in developing our snowhow at Finavia is analysis of the previous winter and planning for the winter ahead. Right after the winter season, our maintenance teams look at how they can improve their operations in the future, and before the following winter season, staff will undergo training to maintain and develop their expertise.

Throughout the year, our simple aim is to keep runways in a state similar to those in summer. In that sense, on our runways, summer also lasts 12 months a year.

Snow and ice have the potential to impair the friction of runway surfaces, so our maintenance and air traffic control staff keep a constant eye on weather forecasts.

All of our runways are equipped with high-tech sensors that monitor tiny changes in the tarmac temperature, both on the surface and underneath it, constantly.

This allows us to predict weather conditions six to eight hours in advance. Weather sensors and forecasts become more sensitive by the year, which leads to better timed winter maintenance.

Contrary to what people might think, it’s not the amount of snow itself that airport maintenance struggles with, but temperature. We are particularly interested in temperature changes around zero centigrade, as this is the trickiest temperature from an air-traffic-safety point of view.

When weather conditions are close to freezing, but there isn’t much snow, runways are at risk of freezing over. Early winter, from November to the beginning of December, tends to be the trickiest time for us in this respect.

Measuring friction regularly is essential for safety, and information on tarmac friction is fed directly to traffic control, who, together with the pilot, decide whether it’s safe to land.

An army of sweepers and blowers When snow does begin to fall, our army of industrial-scale snowploughs, sweepers and snowblowers is ready for action. Helsinki Airport has three runways, and with our equipment it takes only 11 minutes to clean one of them of snow. When one of the runways is being cleaned, the other two can still be fully functioning, which ensures that air traffic can continue normally.

Typically, there are one or two occasions per winter when strong side winds force us to close two of the three runways at the same time. If the one remaining runway needs to be cleared of snow during this time, there can be delays in traffic. However, Helsinki Airport has never had to be closed due to a snowstorm.

This is thanks to the over 100 employees who operate the snow-clearance vehicles and equipment on the runways and apron as well as other ground traffic areas. The maintenance units are on call 24 hours a day, and when a harsh spell is in sight, extra staff can be called in.

Finavia’s strategic snow clearance fleet at Helsinki Airport includes 60 vehicles and other equipment. The fleet is maintained by our own repair shop, and we are also able to produce spare parts when needed.

Along with the manufacturers, we have been developing an efficient brush-blower vehicle suitable for use on runways. After decades of product development, the current model is 25m long, weighs 32 tonnes and is able to plough an area of up to nine metres in width.

It is an impressive sight to see a total of nine of these 32-tonne monsters driving side-by-side on the three-kilometre long, 60m-wide runway. We have about 26 different brushing patterns to choose from, each selected on the basis of departing and arriving traffic flight directions.

Snowbanks forming on the runway edges are then lowered using snowblowers with four-wheel steering and over 1,000hp. We can’t allow the snowbanks to grow too high, as aircraftft wings could come into contact with them.

Furthermore, our icebreaker will dismantle ice around the parking areas to prevent the apron from being too slippery. As a result, we can actually reduce the use of chemicals when clearing ice.

Finavia has received international attention during several winters, due to the reliability of Helsinki Airport, even in harsh snow conditions.

The harsh winters also encourage innovations, many of which have developed from practical needs, such as a service car that uses an internal lift to improve the process of changing runway lights.

In the Finnish winter, it can become uncomfortable to take off one’s gloves out in the open. But, a bulb on the airport runway cannot be changed with gloves on, as its parts are so small.

Some years ago, our team’s electricians solved this problem. They came up with the idea of an opening underneath a service car, and a lift with which they can descend directly onto runway lights. In the shelter of the lift and the car, an electrician can change lights without getting their hands cold.

There are even cameras at the back of the car and above the opening that help to park the car right above the light. These cars and equipment cannot be bought commercially, so they are customised according to Finavia and its maintenance teams’ needs.

Although mechanical methods such as sweeping and ploughing are the primary methods for clearing snow off runways, sometimes we have to resort to chemical de-icing agents for proactive skid prevention and to remove frost and ice from the runway surface.

Anti-icing and de-icing treatments are also performed on aircraft to ensure their manoeuvrability and performance. De-icing and anti-icing treatment is mainly performed during cold seasons, under freezing conditions and is occasionally needed in late spring and early autumn.

To reduce the environmental impacts of winter operations, we use formate-based agents to prevent skidding. They readily decompose and contain no nitrogen.

Helsinki Airport recovers glycol-containing water and snow at the apron. This is carried out by letting the water to wastewater sewage or by using specialised equipment, suction vehicles and snow-gathering vehicles that have been specially developed for these operations. The glycol-contaminated runoffs collected at the airport are then processed by the municipal water treatment works.

We have also constructed and reconditioned de-icing and anti-icing stations where agents can be more efficiently collected. Overall, we invested a total of €74 million in de-icing areas between 2010 and 2018.

As a result, the pollution load caused by anti-icing treatment agents on the aquatic environment has significantly decreased since the turn of the millennium. The nitrogen pollution load has almost entirely ceased, and the oxygen consumption load has decreased by so much that in some years, it’s only a third of what it used to be in the early 1990s.

Thanks to better management of glycol-containing waters and the fact that aircraft de-icing and anti-icing operations are now concentrated in designated areas, the water quality has improved so much that endangered sea trout have returned to spawn in the Kylmäoja stream running on the eastern side of the airport.

Finavia is currently expanding Helsinki Airport to serve growing passenger volumes, and our runway and apron area will also be renewed. Keeping our snowhow skills up to date will remain just as essential in the future.

KIMMO MÄKI, President and CEO has been employed by Finavia since 2018, and is responsible for ensuring that the company’s operations are in accordance with the law and financial administration has been organised in a reliable matter. The CEO chairs the Executive Group and Board of Directors on Finavia’s major subsidiaries.