The future of border control is fast, safe and automated

With airports the world over braced for carnage as the Holiday rush begins, capacity and waiting times will be on every operator’s mind. Chris Gilliland of Innovative Travel Solutions tells us about how Vancouver International is tackling its winter rush. 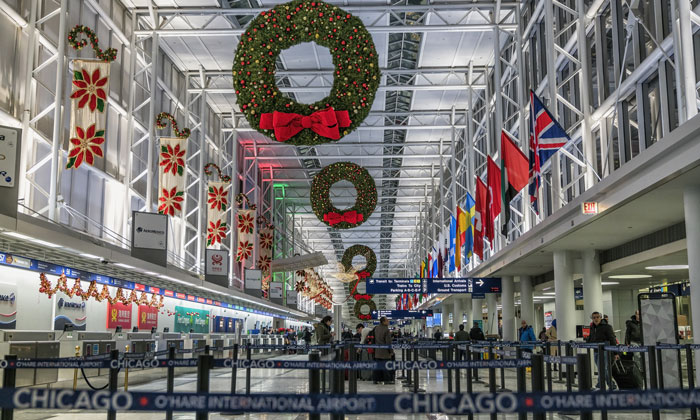 DECK THE DEPARTURE HALLS: The Christmas and New Year period is among the busiest in the aviation calendar

With the holiday season now upon us, airports around the world are experiencing some of the busiest travel days of the year.

In British Columbia, preparations are underway at Vancouver International Airport (YVR) for what we anticipate will be our busiest days: December 21-22, 26, 28-29, and January 1. During this time, we expect an average of more than 80,000 passengers per day to pass through our airport – almost 20,000 more than usual for Canada’s second busiest airport.

It’s a stressful time for travellers, furthered even more so by the inability to escape the inevitable – border line-ups. A so-called ‘rite of passage’ that we, as travellers and airport industry employees, have accepted because global passenger safety and border integrity is of the utmost importance. However, the International Air Transport Association’s (IATA) 2017 Global Passenger Survey revealed that one of the biggest pain points for passengers remains airport border control processes. Travellers are wanting – and airports are needing – to reduce lines and waiting times.

With air travel continuing to grow at an unprecedented level through the emergence of new airlines and routes, a growing middle class, and an increasingly global economy, the pace has quickened with which transportation industries, governments and border agencies alike have pursued new and innovative technology to accommodate passenger processing without compromising safety and security.

The industry is realising that faster, safer, and reliable solutions need to be implemented today to meet the demands of tomorrow, and that reprieve has come by way of automation.

Around the world, airports and port authorities are facing a perpetual either-or scenario: longer lines at border control checkpoints or new resources to accommodate passenger traffic.

For most airports, it is not an option to simply build a new terminal or expand an existing one to accommodate an increase in passenger volume. Infrastructure development is complicated, expensive and requires extensive long-term business planning, community and stakeholder engagement, and takes a lot of time to do properly. This is especially difficult when looking to accommodate specific or temporary spikes in traffic around major holidays and events.

Alternatively, automated systems, primarily kiosks, enable an airport to accommodate increases in passenger traffic (whether long-term growth or temporary spikes) by accelerating the border control process and maintaining or improving the safety of each entry or exit point. As a result, staff can focus on the human elements of passenger processing, a skill-set technology simply cannot discern. This two-step process results in benefits for travellers and airports alike, and is rapidly becoming synonymous with customer satisfaction.

For our team at YVR, this is something we are proud to have pioneered nearly a decade ago. In the wake of seemingly insurmountable wait times as passenger traffic continued to increase year-over-year, YVR partnered with the Canada Border Services Agency (CBSA) to develop and implement a pilot programme called BorderXpress to partially automate the border clearance process. The self-serve kiosk technology was implemented in 2009, and has since led to a reduction in passenger wait times by more than 50 per cent.

What initially began as a pilot, developed into a permanent programme and Vancouver Airport Authority soon realised they needed to allocate distinct resources to BorderXpress. A dedicated business unit called Innovative Travel Solution (ITS) was created with a focus on using kiosk technology and finding travel solutions to border control challenges. ITS currently has more than 1,300 kiosks at 39 airport and seaport locations, helping more than 160 million passengers worldwide clear the border securely, including four of the top five busiest airports in the US, and three of the top four busiest airports in Canada.

In an industry where revenue hinges on mere minutes, every second counts. To that end, kiosks have proven to help airports process travellers, on average, up to four times faster (162 per hour versus 41 using the more traditional methods).

By design, border control kiosks are built to handle every passenger that enters a port’s international terminal – regardless of type of passport or identify card, country of origin, language or digital fluency. They are programmable to accommodate the unique arrival questions and landing cards of international governments, which can eliminate the need for paper forms, and capture, share and process screening information on the spot, facilitating the duties of immigration officers and expediting, for most, the last mile of travel.

A user-friendly technology that has already been implemented at 59 ports of entry around the world, according to the latest report issued by Acuity Market Intelligence. Kiosks essentially automate the administrative functions of border control, resulting in shorter wait times, fewer missed connections, and greater cost savings. These intuitive systems are developed with travellers in mind, incorporating varying levels of familiarity with technology to ensure it is continually improved with each new version. For instance, kiosks are now equipped to handle any biometric verification which includes fingerprint, facial and iris recognition.

Though North American airports remain the primary hub for border control kiosks, new markets such as the EU and Asia have tremendous potential to utilise this technology given their growth in population and air travel frequency amid new routes regularly added by major airlines.

Moreover, international seaports present another relatively untapped market for border control kiosks. In 2017, the global cruise industry projections for passengers topped 25 million, the majority of which come from North Americans exploring the warm waters and islands of the Western Caribbean. ITS recently completed a pilot with America Cruise Ferries, installing kiosks onboard a ship for the first time. This is an area of opportunity that our team will continue to explore as we look to install more kiosks onboard cruise ships and ferries.

In 2015, 10 BorderXpress kiosks were installed at the Port of Vancouver’s cruise ship terminal, becoming the world’s first self-service border control solution available at a seaport. In 2016, two kiosks were installed at Florida’s Port Everglades. And, with 13 new cruise liners anticipated to be seaworthy in 2018, this growing industry will see total capacity increase by an additional 99,895 passengers by 2020.

As the border control landscape stands today, kiosks are the most socioeconomically viable solution.

Where kiosks ensure passenger flow is never impeded in the event a traveller is referred to speak with a border officer, e-gates can result in a disrupted flow when the gate is locked. Additionally, kiosks allow families and groups travelling together to make their declaration at the same kiosk, meaning children don’t have to go through on their own.

The costs of kiosks are highly competitive with the maintenance and implementation fees very minimal because they are designed with no moving parts; and in the space required for one e-gate, an airport can fit approximately two or three kiosks. This space savings allows terminals to take advantage of precious square footage that can be used for alternative purposes or innovative design features – providing efficient, secure and user-friendly travel solutions in each market.

Kiosks are also accessible to everyone, regardless of whether you have an e-passport (many countries have not fully transitioned to e-passports).

As travellers across the globe mentally ready themselves for holiday journeys to visit friends, family and loved ones via planes, trains and automobiles, the anticipated pressure on international transportation hubs is not unexpected, but it is still often unwelcomed by those waiting hours in unreasonably long lines.

Time is also money, and though the high travel seasons bring in considerable revenue for airports and airlines, relationships with carriers, businesses, fellow passengers and, often, those travelling alongside you can get unnecessarily strained.

Technology is supposed to help make our lives easier, and as such, the inherent goal of kiosks is to ensure our borders remain safe, secure and convenient for travellers and staff alike, addressing existing problems on both sides of the line. Tailored for each port, and customisable to meet the needs of each unique space, demand, and geographical location, kiosks remain a steadfast investment in travel.