Airport fire fighters often attend emergencies at short notice, so being constantly prepared is crucial. At Christchurch International Airport, in the South Island of New Zealand, its Airport Fire Service has developed a way to train without an aircraft or firefighting gear. International Airport Review finds out more. 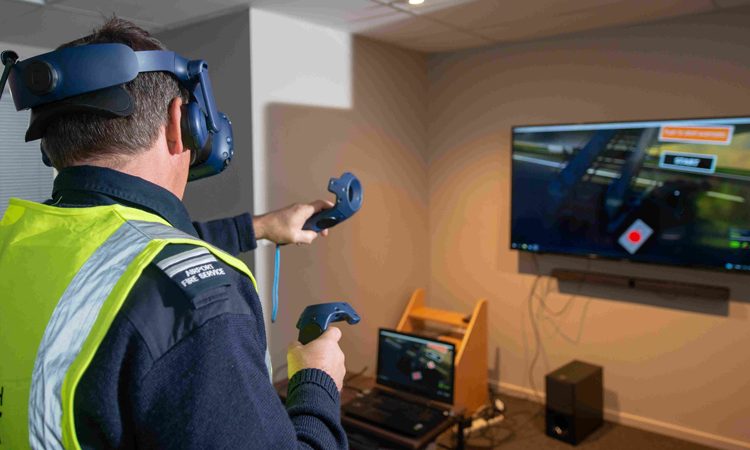 Over the past couple of years, the airport has developed virtual reality (VR) training as an extra training method, to give fire fighters more ‘access’ to aircraft, without having to wait for an available aircraft at a time to suit the fire team.

From observation to immersion

Speaking to International Airport Review, Airport Manager of Digital Solutions and Data Technology, Art Martinson, said the VR training was developed by a Christchurch company, in collaboration with the airport company and its fire fighters. Over time, more aircraft types have been added to help the fire fighters prepare for the different aircraft they may have to use their skills on – with more to be added in future.

“Our VR platform takes us from observation to immersion, to the next generation of training and recruitment,” explained Martinson. “We continue to develop more simulations of real situations that are otherwise almost impossible to train for in real life.”

Peter Moore, Manager of the Airport Fire Service and Chief Fire Officer, said all his firefighting teams have been trained on the VR system and are very positive about it.

“VR replicates fire scenarios on a scale not possible in our training area, so it’s a valuable tool,” he added. “Our firefighters can use this training to prepare for an actual aircraft emergency, so when the time comes they will be in an environment they are familiar with and confident in. This VR training is an extra tool for our teams to become more familiar with aircraft systems and layout and will further build muscle memory so a response becomes more instinctive and spontaneous.”

Tim Morris, Manager of Airfield Operations, said the airport firefighters are first on the scene of more than 500 emergencies on the airport campus every year.

“That includes fires, rescues, alarm activations and hazardous material spills, medical emergencies and aircraft incidents,” he stated. “Our team trains every day to meet tough standards. They expect a lot of themselves so this new technology enables them to train for, and be completely confident in, difficult situations they can’t always access, such as inside aircraft.”

The fire fighters have demonstrated the VR training to many people in many different situations, both on and off the campus, including packing it into a suitcase and taking it to train in other places, including the offices of New Zealand’s Prime Minister and Cabinet. As well as helping airport staff and stakeholders understand how technical the fire response would be if required, it helps potential fire service applicants get a view of the work, and members of the public have put on the headset at conferences to test their reactions. 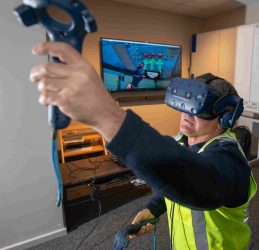 Senior Fire Officer, Ian Faulkner said developing the VR programme was not a difficult process because everyone bought into it.

“Corvecto, the clever team we collaborated with, was easy to work with and very receptive to our feedback as it was developed. Air New Zealand gave us access to aircraft to make sure we were getting it accurate, and our team could see it would give us an extra training tool. It’s a way to train our teams without impacting our environment and safety is the top priority. Of course, its realism is a big plus and the ‘hands-on’ opportunities it gives our team are a valuable addition to our other training.”

Using VR to train in all parts of an aircraft

Senior Fire Fighter Chris Peat, has trained almost a hundred people on the VR firefighting tool and demonstrated it away from the airport too.

“The VR gives firefighters access to parts of aircraft we rarely get to, such as the flight deck and the cargo hold. That helps us understand throttle control, handbrakes, how doors work, and other controls. Scheduled aircraft come and go on the airfield with tight turnaround now, so it’s difficult to get time to confirm best approach angles to an aircraft. Now, if we do walk around the airfield, we notice and understand things we have learned virtually. It’s all about muscle memory and building sensory response and awareness.”

The VR training is becoming part of the compulsory training modules at Christchurch Airport Fire. Watch teams train together, one person at a time going through the VR exercises, while the others observe and learn.

“Even though you know you have a headset on and your feet are firmly on the floor, one of the exercises gives the experience of falling and is very realistic. I remember being quite sure I could feel the wind rushing past my face as I fell – which of course I didn’t. It’s a reminder of what the mind can do.”

The VR training is now an essential training tool at Christchurch Airport, as another part of the extensive training every fire fighter takes part in, in case the day comes when muscle memory and recall is put to the test.