In the latest instalment of International Airport Review’s exclusive online series, Emanuel Fleuti, Head of Sustainability & Environment at Zurich Airport, outlines the opportunities to go beyond their own decarbonisation plans and support other aviation industry partners. 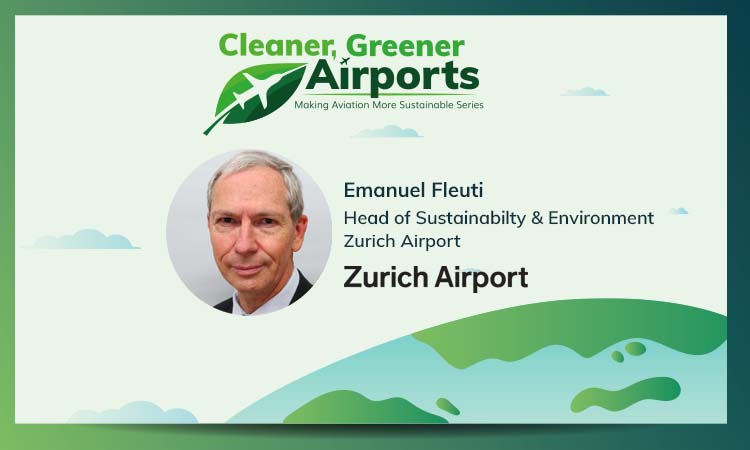 Undisputedly, climate change is today’s challenge of our society. All industry sectors, including transportation and specifically aviation, are called to decarbonise their businesses. Zurich Airport (ZRH), one of the forerunners in the field of climate protection, started as early as 1991 to assess energy consumption and climate emissions, thus creating the baseline to shape measures. To date, Zurich Airport has reduced its own carbon emissions (Scopes 1 and 2) since 1991 by almost 50 per cent – in absolute numbers. This already matches Switzerland’s commitment for 2030 at the Paris Agreement 2015. Over the same time, traffic and infrastructure has increased by almost 60 per cent.

To be successful, we have found it paramount to pursue a structured approach that starts with assessing sources, scopes and emissions. The next step included the systematic analysis of opportunities with costs and benefits. And finally, reduction measures had to be implemented. ‘Walk the talk’ is not only a promise, but a reality at Zurich Airport.

The best type of energy, is energy not used

As airports are large real estate operators, the focus inevitably lays on how to reduce demand for heating, cooling and electricity, even before looking at renewable energy sources. The best kilowatt-hour energy is the one not produced. Pursuing this philosophy has led our airport to still use the same amount of primary energy today as back in 1990, albeit the considerable shift from heating to electricity demand and increase in infrastructure.

A very practical example is the newly opened building complex, The Circle. This complex consists of six buildings over a common base, with mixed uses as hotels, medical clinics, offices, a conference centre and some shops and restaurants. The complex has both earned the Swiss MINERGIE label (considering energy consumption) and the international label LEED for the more broader sustainability approach. With LEED Platinum, The Circle is the largest building complex in Switzerland having earned this label. Adding to the success are the use of geothermal energy or solar plants on all roofs.

The road to net zero

Our commitment to net zero emissions by 2050 is backed by a robust roadmap on how to achieve this target and we are thus confident we can achieve the required goal.

Within the aviation industry sector, airports are usually very tangible and visible, particularly when considering environment. But when it comes to climate impacts from aviation, the elephant in the room sits on the runway. Indeed, even within only the landing and take-off cycle perimeter, aircraft contribute with approximately 90 per cent to the ‘airport system’ carbon emissions.

For Zurich Airport, it thus makes perfect sense to develop and pursue a dual strategy: To decarbonise its own activities and to facilitate the process of decarbonisation of the airport partners’ activities, with the main focus on the aircraft.

One particular success story is the reduction of fuel consumption and thus reduction in carbon and local air pollutants in the aircraft ground energy system. Already back in the 1980s, Zurich Airport and – at the time – Swissair started to install fixed 400 Hz systems at the dock stands, followed by pre-conditioned air systems that would provide centralised heat in the winter and cooling in the summer. In combination with enforced local airport regulation that mandates airlines to use the systems when available and serviceable, emissions are reduced to the minimum. Auxiliary power units (APU) are only operated to start main engines and in few extraordinary conditions. As a result, emission reductions from APU are around 60,000 tonnes of CO2 per year or about 95 per cent of all APU emissions if no systems at all were available. This amount is more than two times the airport’s Scope 1 and 2 emissions together and highlights the importance of addressing third party emissions.

Zurich Airport has thus turned towards the aircraft emissions and started work on sustainable aviation fuels (SAF) as early as 2016. While airports traditionally have no specific role in the fuel business – they usually don’t produce, transport, buy, store or use aviation fuel – they often fulfil a role as facilitator for the development of aviation relevant projects.

However, it wasn’t until 2019 when specific requests and ideas in the context of the World Economic Forum’s 2020 annual meeting, resulted in a project. In cooperation with the local fix base operator, Jet Aviation, and supported by several business aviation associations, Zurich Airport worked to establish a demonstrator supply chain for SAF. This included negotiations with the Federal Customs Administration, Federal Office for Public Health, the compulsory fuel stock piling organisation and the airport fuel farm operator. Meanwhile, Jet Aviation developed the commercial process with a SAF manufacturer, logistics provider and potential customers. The ‘proof of concept’ project proved to be successful, yielding a total net CO2 reduction of 115 tons.

Based on the lessons learned, we pushed along to turn the concept phase into a standard supply process. This required adaptations in the customs regulations with impacts on taxation for domestically used fuels. With support from Avenergy, the Swiss association of oil companies, the solution proposed by Zurich Airport was eventually approved by customs, thus opening up the standard supply process of SAF to Switzerland.

In the wake of that milestone, Swiss International Air Lines became the first scheduled airline at Zurich Airport that uploaded SAF onto their aircraft in July 2021. It was a full block train of 20 cistern wagons rolling into the fuel terminal at the airport, carrying a blend of 36 per cent SAF based on used cooking oil and tallow, resulting in a reduction of 1,250 tons of CO2.

As such, any Jet-A1 consumer in Switzerland, no matter at which airport or facility, now has the possibility to import SAF through a regular process. Given the full drop-in nature of biogenic or synthetic SAF, there are no modifications on any of the fuel infrastructure required. This will be of further importance when the anticipated EC ReFuel Aviation Initiative with a SAF blending mandate becomes regulation and Switzerland chooses to adopt a similar approach. It is likewise important for other future aviation fuels like synthetic kerosene from power-to-liquid of even sun-to-liquid processes.

Zurich Airport is certainly ready to welcome more sustainable aviation fuels. However, it might be more feasible not to transport SAF to each airport physically. Due to the global nature of CO2 impacts, fuel substitution with emission reduction can occur at any location and can be credited through book-and-claim mechanisms. But, Zurich Airport still feels it is important to support and drive the process of deploying SAF as a recognised game changer in aviation emissions.

Emanuel Fleuti has been the Head of Sustainability & Environment of Zurich Airport since 1990. He is responsible for all environmental aspects excluding aircraft noise, with particular expertise in sustainability, environmental management, air quality and climate change. He has been participating in several international programmes like ICAO’s Committee on Aviation Environmental Protection (CAEP) or the current European AVIATOR project. He has chaired the environmental committees of ACI EUROPE and ACI World and supports other airports and aviation organisations through consulting. Emanuel Fleuti has a MSc in Geography.