Venice Marco Polo Airport coordinated an in-depth study to reveal how – and where – passengers become stressed when travelling through the airport. 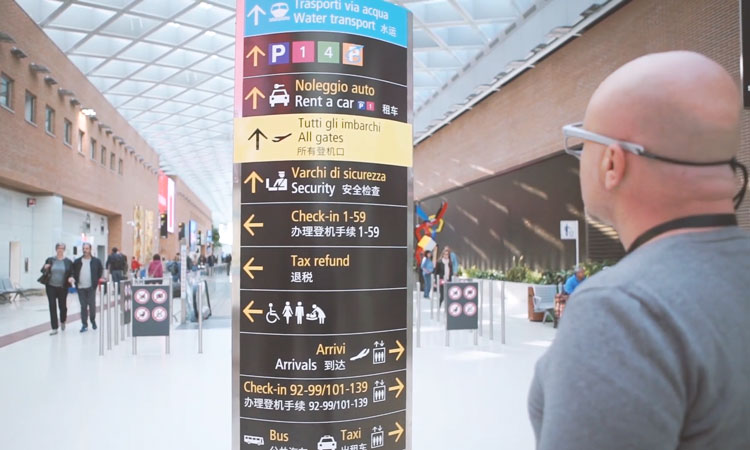 Venice Marco Polo Airport was Italy’s first airport to carry out, with the consultancy of TSW, an environmental study on signage effectiveness, and on the main causes of stress during airport passenger transit.

Last October, as well as the traditional feedback approach of satisfaction questionnaires, a study of implicit aspects dictated by body language was added, using new technologies through which biometric and behavioural data were collected. Methods of analysis were also exploited which made sense of the large amount of data collected.

Participants were equipped with wearable eye-tracker devices and a stress bracelet, with the former detecting eye movements when looking at signs and the latter collecting stress-related biometric data to identify the main stress factors along the typical routes passengers have to follow on arrival, and when departing from the airport.

The study involved approximately 40 participants, aged between 30 and 60, who, in a very realistic way (receiving a simulation boarding pass), simulated their departure and arrival journey at the airport. Different access journeys were conceived (parking, bus, water transport) to test as many possible aspects and combinations, as well as their experiences at different security gates (north gate, fast-track, generic) and destinations (Schengen, Extra Schengen).

To support the effectiveness of this method, the over 50 case studies presented during the ANFA conference ‘Connections: bridgesynapsis’ (2016) and, in particular, the study by Fich Lars Bronson ‘Can the design of Space alter the stress response’, show how areas with a high density of information and architecture can influence people’s stress levels. To further underline the validity of this type of research, the method has also been applied in other sectors such as catering, retail and as a support in the field of military aviation; evaluating the workload of pilots during different landing manoeuvres.

The role of signage in the airport is crucial

Signage within an airport has clear implications on operation (directing flows), customer experience (to reach destinations easily without stress) and cost.

Venice Marco Polo Airport currently has several projects under way in view of the terminal’s expansion and the revamping of wayfinding due to new passenger needs (for example multilingual signage), with an overall cost of several million euros in the coming five years.

With this experience, both the criticality of the terminal access system and the issues of the current wayfinding system have emerged, thus making the areas of intervention clear. This has led to several advantages for operations (halving the number of signage totems to enhance flow and space), customer experience (restyling of the information layout from a subdivision by relevance with a greater number of indications, to a different arrangement divided into floors with fewer but more significant directions), and for reducing passengers stress and confusion; thereby improving their orientation experience.