MoU promoting trade and travel has been signed in South Korea 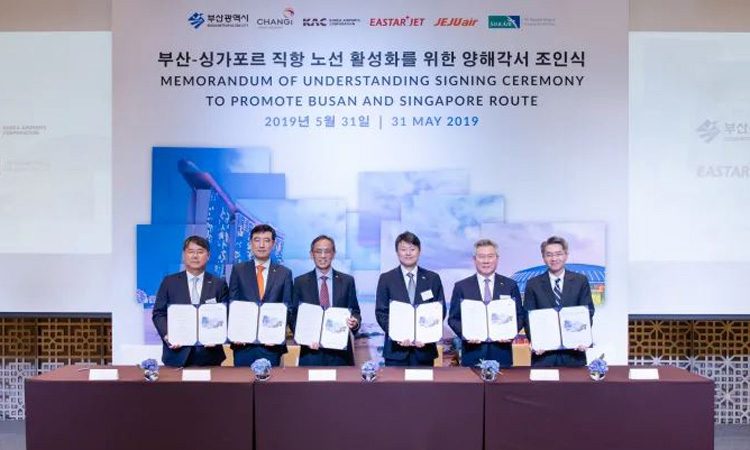 Changi Airport Group has announced a partnership with Busan Metropolitan City (BMC), Korea Airports Corporation (KAC), Eastar Jet, Jeju Air and SilkAir through a six-party Memorandum of Understanding (MoU) to jointly promote trade, business and tourism flows between Singapore and Busan. The MOU was signed in Busan, South Korea, on 31 May 2019.

The one-year partnership follows the allocation of traffic rights to South Korean airlines Eastar Jet and Jeju Air, as well as SilkAir, the regional wing of Singapore Airlines, to operate flights on the Singapore-Busan route. SilkAir’s four-times-a-week service to Busan started on 1 May 2019 while Jeju Air will commence its service to Singapore on the 4 July 2019. Eastar Jet is expected to do the same in the coming months.

The six-party collaboration aims to strengthen air connectivity between Singapore and Busan and raise awareness of the respective airlines’ product offerings. In the coming year, residents and travellers from both cities can expect various on-ground events such as roadshows, travel fairs and campaigns as CAG, KAC and BMC work closely to provide support for the three airlines to grow and sustain the Singapore–Busan route.

Busan had been identified by OAG as the top unserved market for Changi Airport, with an estimated indirect two-way traffic exceeding 75,000 passenger movements annually. This new non-stop route will offer greater convenience for travellers, including additional low-cost carrier options to South Korea.

With Changi’s strong non-stop connectivity to 42 cities in Southeast Asia and 12 cities in Australia and New Zealand, travellers from Busan and its metropolitan area can capitalise on the new services for onward travel to these destinations.

Commenting on this development, Lim Ching Kiat, Managing Director, Air Hub Development of Changi Airport Group, said: “For many years, connectivity between Singapore and South Korea has been limited to Seoul with around 60 weekly services. As Changi Airport is the gateway to Southeast Asia, and given the increasing travel demand over the years between Singapore and Busan, we are pleased to welcome the opening of this new route which will offer greater convenience for travellers between the two cities. This exciting partnership – the result of mutual commitment among the different parties involved – shows our collective commitment to work together to ensure the sustainable development of this route in the years ahead. The MoU signifies a breakthrough achievement and positive development in this effort.”

Son Changwan, President and CEO of Korea Airports Corporation, said: “The Busan- Singapore route will promote tourism in both cities and help improve travel convenience for residents in Busan and Singapore. KAC will continue to make every effort to stabilise Busan-Singapore route and to meet the requirements of the government and local community by launching new airway connections.”

A BMC official said: “This MoU is aimed at strengthening the cooperation of various organisations for the stable growth of Busan-Singapore route which is the longest route of Gimhae International Airport. When various promotional activities are conducted after the MoU, we expect an increase in tourists visiting Busan and the improvement of Busan’s global status.”