The annual crash and rescue exercise at Hong Kong International Airport (HKIA) was successfully completed on Friday 9 November, and took a total of five hours, to ensure the safety of everyone involved in the incident. 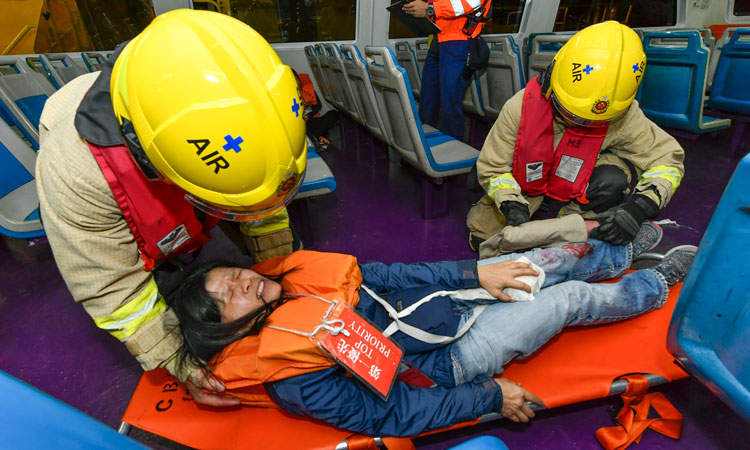 This year’s exercise was held at the works area of the Three-runway System (3RS) for the first time, which provided opportunities for the airport community, government departments and related organisations to familiarise themselves with the emergency procedures in dealing with aircraft incidents.

Over 1,000 representatives from more than 100 organisations and government departments took part in the exercise. Volunteers were also recruited to be role-playing passengers, ‘meeters and greeters’, and journalists. HK Express was the participating airline this year.

The exercise started at 02:01 when a simulated arrival flight carrying 130 people veered off the North Runway and ditched into the 3RS reclamation site. According to the exercise scenario, the starboard engine of the aircraft crashed into a deep cement mixing (DCM) barge with 10 crew members on board. A diesel generator on the DCM barge subsequently caught fire upon the collision. Meanwhile, heavy smoke formed inside the aircraft cabin and the barge.

Air traffic control tower personnel who witnessed the incident immediately activated the crash alarm. The Airport Emergency Centre (AEC) was then activated to facilitate close communications and coordination among different departments and organisations. Emergency services arrived at the accident site soon after to render rescue, medical, casualty conveyance and other support. The Airport Fire Contingent deployed 17 fire appliances, two fire and rescue vessels and 14 ambulances to the scene, and the West Sea Rescue Berth (WSRB) served as the rescue assembly point where a triage area was set up.

A total of nine simulated deaths and 74 simulated injuries were reported in the exercise. Injured passengers and crew members were rescued and transported to six hospitals by ambulance or other vehicles. Uninjured passengers were transferred to the Passenger Reception Centre for assistance and police debriefing, and then underwent immigration and customs clearance before going to the Family Reception Centre to reunite with their families.

Steven Yiu, Deputy Director of Service Delivery at AA, said: “At HKIA, the safety of passengers and the airport community is our top priority and we attach great importance to emergency preparedness, given the number of construction projects taking place at this busy airport. The exercise conducted this morning provided a valuable opportunity to test the coordination and rescue procedures at the 3RS worksite. We will continue to conduct different drills with our business partners and the airport community to ensure the readiness of all parties in contingency response.”

Hawaiian airlines relocates to modern passenger Terminal B at LAX