Construction has begun on the next phase of modernisation at Daniel K. Inouye International Airport in Hawaii. 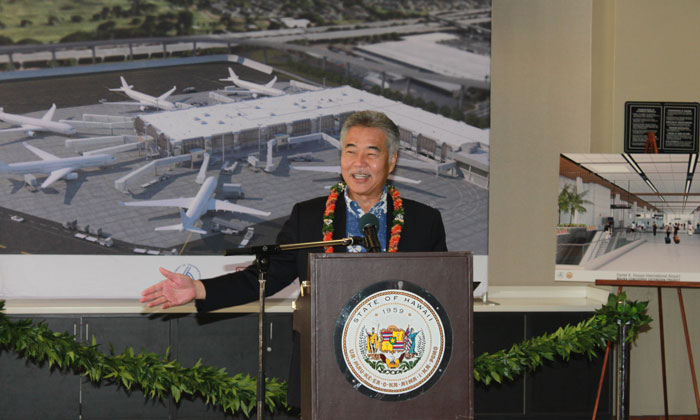 The Governor of Hawaii, David Y. Ige, broke ground on the construction of the new Mauka Concourse at HNL this week, marking the beginning of work that will boost gate capacity for larger aircraft at the Honolulu hub.

“I’m thrilled to get underway with construction of a new concourse at the state’s busiest airport. In two and a half years, we will deliver a beautiful new facility to the residents of our state and the visitors who come to Hawaii from around the world,” said Mr Ige.

“The project is really the tangible first step in the modernisation of the Daniel K. Inouye International Airport and will add much needed gates to accommodate growing demand at Hawaii’s busiest airport,” said Blaine Miyasato, Airlines Committee of Hawaii Co-Chair. “We look forward to the opening of a new world class facility here in Honolulu.”

The new $220-million, two-level Mauka Concourse will be located on the Ewa side of the airport and will connect with Terminal 1 (the current Interisland Terminal).

The concourse will feature a connecting walkway to Terminal 1, passenger holdrooms and boarding areas, restrooms, information kiosks and agricultural screening to allow for domestic departures. A new Ramp Control Office will be constructed, with gate management, flight management and fire alarm systems that tie back to the existing State Ramp Control Office.

HDOT will continue its public private partnership with airport concessionaires to add popular amenities such as retail and restaurant concessions in the new Mauka Concourse.

Peter Fithian, Airport Concessionaires Committee Chairman, said: “We want the airport to be part of a person’s vacation experience and the new Mauka Concourse will help accomplish that goal. Passengers will be able to shop for fine merchandise or enjoy a meal or beverage in a relaxing environment before or after their flight.”

Work is currently underway on airfield and utility infrastructure work which are necessary to allow wide body aircraft access to the new gates.

To make room for the new Mauka Concourse, the project will demolish the existing Commuter Terminal building and annex, including the ground level parking Lot B and terminal roadways. Public parking will be discontinued in parking lot B on June 1, 2018.

On May 29, 2018 Mokulele Airlines moved locations to Terminal 3 located on the Diamond Head side of the airport with its entrance on Aolele Street between the Delta Cargo and United Cargo facilities. For more information on the new Mokulele Airlines location click here.

HDOT is implementing a new numbering system for all gates, baggage claims and signage at HNL in order to accommodate the future gate expansion at the Mauka and Diamond Head Concourses, and to provide more efficient signage to direct people through airport property, while upgrading the look of the signage, which has not been updated in more than a quarter century.

The Mauka Concourse construction is anticipated to be completed and delivered to the public by the end of 2020.