Posted: 15 May 2018 | International Airport Review | No comments yet

To keep up with rapid growth, the airport on Canada’s eastern coast has been given the go ahead on an expansion that will increase its terminal size by 50 per cent. 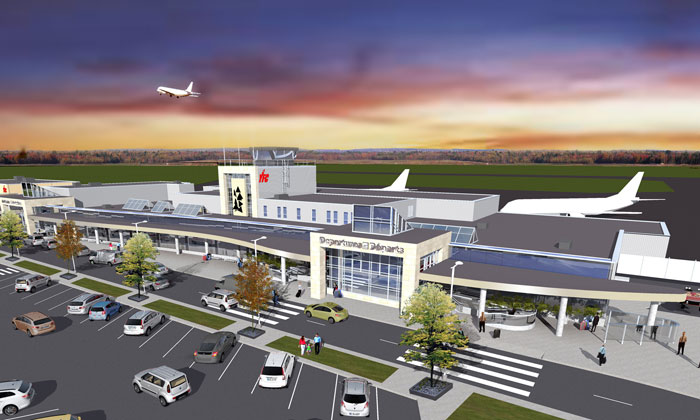 The current terminal exceeded the capacity it was designed to accommodate more than 10 years ago. The airport has shown consistent growth over the past eight years, with passenger traffic increasing more than 33 per cent in the past five years alone. This increased traffic, combined with two new year-round air carriers and several new sun destinations, has placed an ever-increasing strain on the airport’s outdated infrastructure.

As a not-for-profit organisation, all revenues generated by the airport authority are reinvested into the airport and through sound financial management the airport authority is able to fund 40 per cent of the project. Regular operations at YFC generate 662 full time equivalent jobs, $38.8 million in GDP, and $25.8 million in labour income to New Brunswick annually. The terminal expansion and renovation will enable the airport to continue to increase traffic—and economic impact—as well as generating an additional 572 full-time equivalent jobs during the construction phase.

“This project is critical, and we are grateful that all levels of government recognise the importance of the airport to our region’s economy,” said Fredericton International Airport Authority (FIAA) President and CEO Johanne Gallant.

Matt DeCourcey, Member of Parliament for Fredericton, on behalf of Amarjeet Sohi, Minister of Infrastructure and Communities, said: “The Government of Canada is proud to invest in the expansion of one of Atlantic Canada’s key gateways for business and tourism. The Fredericton International Airport brings hundreds of thousands of people to New Brunswick annually. Modern and efficient transportation infrastructure provides greater economic opportunities for Canadian businesses, connecting them to regional and international markets, and provides good jobs for the middle class and those working hard to join it.”

Your government understands the importance of making strategic investments as it is a pivotal component of our multi-year economic growth plan,” said Premier Brian Gallant. “As an export-driven economy, it is important we invest in our logistical infrastructure so New Brunswick businesses can get their products and services to move around the world.”

The expansion will increase the size of the terminal by 50 per cent. Improvements travellers will benefit from once the expansion is complete include:

Design work has been completed, and the project is tender-ready. Construction is expected to begin in summer 2018.

“Our airport is the first impression travellers, investors, and dignitaries have of our city, and the last chance to reinforce the positive impression we know our capital region makes on visitors. This design reflects the importance of the Fredericton International Airport in welcoming travellers to our city and our province,” Ms. Gallant added.