A series of changes and updates to flight plans, aircraft and descent manoeuvres has meant Etihad Airways has successfully slashed its carbon footprint. 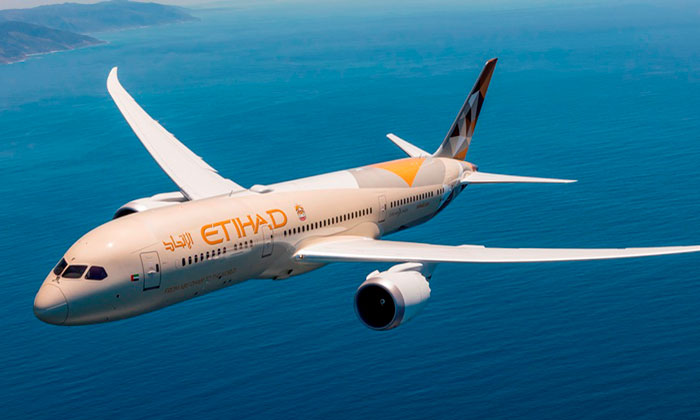 GREENER GENERATION: One of Etihad's Boeing 787s in flight

Etihad Airways has announced it eliminated around 195,000 tonnes of carbon dioxide emissions in 2017.

The fall is the accumulation of a number of factors, including Etihad reducing the amount of fuel consumed by its aircraft by more than 62,000 tonnes. The result represents a 3.3 per cent improvement from the year before, and is the equivalent of 850 flights between Abu Dhabi and London.

Last year, Etihad Airways also retired several older aircraft in favour of the Boeing 787, one of the most fuel efficient commercial aircraft in operation due to its lightweight composite structure. It currently operates 19 Boeing 787s in its 115-strong fleet of passenger and cargo aircraft, which is one of the youngest in the skies at an average age of 5.4 years.

Richard Hill, Chief Operations Officer at Etihad Airways, said: “2017 was a particularly good year for fuel efficiency. The combination of retiring some of our older aircraft and increasing the proportion of Boeing 787 aircraft within our fleet, together with optimising our flight paths among a range of other initiatives has made a noticeable improvement to our fuel consumption and emissions profile.”

Etihad has also said it strengthened its collaboration with air traffic control providers at many of the major airports to which it operates, in particular in Abu Dhabi, in order to improve the efficiency of many of the descent and approach profiles. The airline believes most fuel efficient descent manoeuvre is known as a ‘continuous descent approach’, whereby the aircraft reduces height gradually, rather than in a stepped manner. Thanks to an increase in the number of continuous decent approaches in 2017, a total of 980 tonnes of fuel was saved over the course of the year.

By combining key fuel saving projects with operational improvements, the efficiency per passenger kilometre improved by as much as 36 per cent on some of Etihad’s routes.

Ahmed Al Qubaisi, Senior Vice President Government and International Affairs for Etihad Aviation Group, said: “We place a high value on sustainability and are always looking for new opportunities to reduce our carbon footprint. We’re extremely proud of our year-on-year improvement, which benefits not only Etihad in terms of fuel savings but also the environment on a wider level. This result is a testament to the focused collaboration of teams across our business as well as strong cooperation with important local and international partners in Abu Dhabi and across our network.”