The CEO of Australia’s Government-owned air navigation service provider, Airservices Australia, has hailed a contract which will blend civil and military air traffic control systems as “probably the biggest development in the safe management of Australia’s skies since aviation began” in Australia. 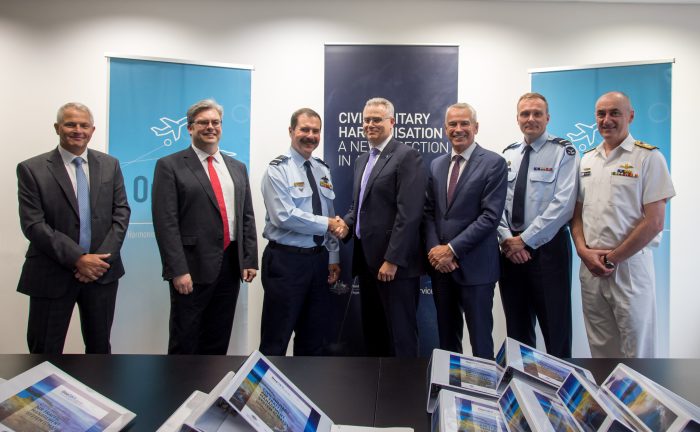 Airservices Australia and the Department of Defence have signed contracts signifying a major milestone in unifying the nation’s civil and military air traffic management systems.

The AUS $1.2 billion OneSKY contract was signed with Thales Australia, a defence contractor, and will bring in a system known as CMATS – the Civil Military Air Traffic Control System.

Developed in partnership by Airservices and Defence with Thales Australia, the new system will see air traffic controllers use advanced technology and real-time traffic prediction tools.

“OneSKY is game-changing. It is transformative, not only for air traffic management in Australia, but world-wide there is nothing like it.

“This state-of-the-art system means for the first time, civil and military air traffic controllers will share the same integrated air traffic management system, using the same information to jointly manage 11 per cent of the world’s airspace for which Australia is responsible.

“Although executing the final contracts is a significant milestone, it’s not the beginning. We’ve been focused on implementation for a while.”

Progress towards the delivery of CMATS, under advanced work orders, has been made with a view to delivering the enhanced safety and economic benefits to the aviation industry as soon as possible.

“In 2017, we commenced installation of the first phase of the new Voice Communication System, which will be commissioned later this year,” Mr Harfield said.

“We have also completed the system requirements review in January, which means Airservices, Defence and Thales have a common agreed understanding of the system’s requirements.

“This has significantly reduced risks in the project prior to finalising the commercial and contractual arrangements.

“Reducing uncertainty in system requirements prior to finalising the contracts, was a critical risk reduction strategy developed to address the challenges that other major overseas air traffic control providers experienced with their own system replacements.

“In reaching this milestone, our priority has and will always be, the continued safety, security and efficiency of Australia’s airspace.”