The biggest general aviation airport in the Netherlands, Lelystad Airport expansion was due to be completed in April 2019 so that it could begin taking commercial holiday traffic. 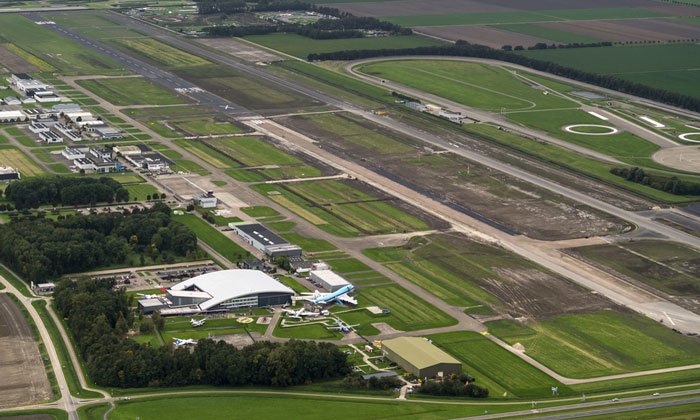 DELAYED: Lelystad was due to take summer pressure of Schiphol next year

The opening of the Netherland’s biggest general aviation airport to commercial flights has been delayed until 2020. Lelystad Airport, which was bought by the Schiphol Group in 1993, was due to open to civil aviation in April 2019, taking pressure off of Amsterdam Airport Schiphol.

In a statement published on Lelystad’s website yesterday, the airport’s Director Hanne Buis said: ‘We are disappointed with the report that the minister sees no possibility to open up Lelystad Airport on April 1 2019 for holiday traffic. Based on long-term and clear agreements, we have created an airport that is ready for use on April 1 2019. Of course, I understand that the Minister [Transport minister Cora van Nieuwenhuizen] puts care first. I have also always underlined that care is above speed.

“At the same time, the minister has also confirmed today that Lelystad Airport will be open in 2020 and that we will thus be able to make the necessary contribution to the implementation of the widely supported selectivity agreements.

“This does not alter the fact that the postponement announced today can not benefit from the positive spin-off that the airport has to offer the region.

“It is positive that Air Traffic Control the Netherlands (LVNL) and the Commando Air Forces (CLSK) have found improvements in the connecting routes and as a result a large part of the bottlenecks – addressed by residents – is being resolved.

“I trust that the Ministry of Infrastructure and Water Management will make every effort to comply with the agreements made and the important steps for the opening in 2020.”

CEO and President of Royal Schiphol Group Jos Nijhuis said: “Of course, I understand that the Minister has to put due diligence first. On the other hand, the Dutch aviation sector now has to wait even longer for a political and social decision made 10 years ago to be implemented. I find that [situation] disappointing”.

“The aviation sector continues to grow and people increasingly use planes to get to work or go on holiday. Lelystad Airport’s opening on 1 April 2019 was part of the solution to address that situation, which the Minister also acknowledges. Unfortunately, this will not happen now”.

“In this way, we cannot implement the selectivity agreed upon by the aviation sector, local residents and politicians in the Alders Agreement. This agreement was unified and indivisible. That means we will have to renegotiate a new agreement together”.