A new role has been created to help understand the role general aviation plays in the UK economy and identify key pieces of infrastructure that support its activities. 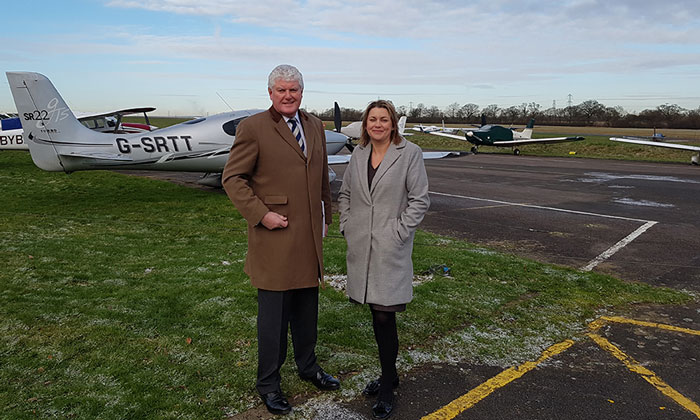 A Conservative politician and former Police Detective has been made the UK Government’s first General Aviation Champion. Byron Davies’ new position was created to lead research and engage with flyers and identify a network of strategically important airfields to help the general aviation sector develop.

It was announced by Baroness Sugg, Aviation Minister and Parliamentary Under Secretary of State for Transport, while visiting Elstree Aerodrome in Hertfordshire today (February 7) to discuss the importance of private flying to the economy, a subject on which Mr Davies has been tasked with writing a report.

Mr Davies, the founding chairman of the General Aviation All Party Parliamentary Group, will also have the help of York Aviation, which has been commissioned by the government to carry out research on airfields of strategic significance.

Baroness Sugg said: “Smaller airfields and the pilots who use them contribute £3 billion to our economy and support more than 38,000 jobs, be that through business jet operations, flying schools or leisure flying.

“Byron brings both passion and expertise to the role and I am confident he will work closely with flyers and researchers to shape the future of the general aviation network within the UK.”

Commenting on his appointment as General Aviation Champion, Byron Davies said: “This is an exciting opportunity for general aviation and I’m delighted to have been asked to undertake this piece of work.

“The sector makes a major contribution to the economy and it’s only right that its voice is heard at all levels of government. I look forward very much to engaging with the aviation community over the coming months.”

The General Aviation Champion has been appointed for 12 months and will gather evidence of the sector’s value to the economy and the need for a protected network of airfields.

Mr Davies was elected as an MP for the Welsh constituency of Gower in 2015. In the 2017 General Election, he lost his seat to Labour’s Tonia Antoniazzi but was named as the new chair of the Welsh Conservatives in September.