Passengers on a small domestic flight had a lucky escape after a drone flying illegally close to Quebec’s Jean Lesage International Airport struck their plane. 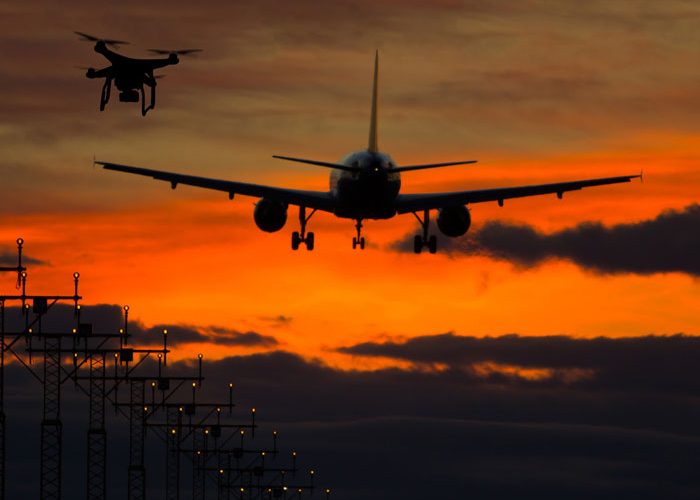 A MATTER OF TIME: Legislation is being drawn up the world over to try and combat the problem of drones.

It was the first such incident in North American history, one that the Canadian Federal Transport Minister said could have been “catastrophic”.

The plane was on approach to Jean Lesage International Airport in Québec City from Rouyn-Noranda on Sunday when the drone smashed into its body.

Estimates say that the drone was hovering around 450 metres off the ground, three miles from the airport  – just breaching the 5.5 km exclusion zone for drones around Canadian airports.

In a statement released three days after the near miss, Transport Minister Marc Garneau said: “On October 12, 2017, a Skyjet flight was struck by a drone while inbound to Jean Lesage International Airport in Québec City. This is the first time a drone has hit a commercial aircraft in Canada and I am extremely relieved that the aircraft only sustained minor damage and was able to land safely.

“Although the vast majority of drone operators fly responsibly, it was our concern for incidents like this that prompted me to take action and issue interim safety measures restricting where recreational drones could be flown. I would like to remind drone operators that endangering the safety of an aircraft is extremely dangerous and a serious offence. Anyone who violates the regulations could be subject to fines of up to $25,000 and/or prison. This applies to drones of any size, used for any purpose. All airports, helipads and seaplane bases are “No Drone Zones” if you do not have permission from Transport Canada. For 2017, to date 1,596 drone incidents have been reported to the department. Of these, 131 are deemed to have been of aviation safety concern.”

US media reporting on the incident have said that though there have been many claims by North American pilots that their planes have been battered by drones, the Federal Aviation Authority data shows this is the first one to be confirmed.