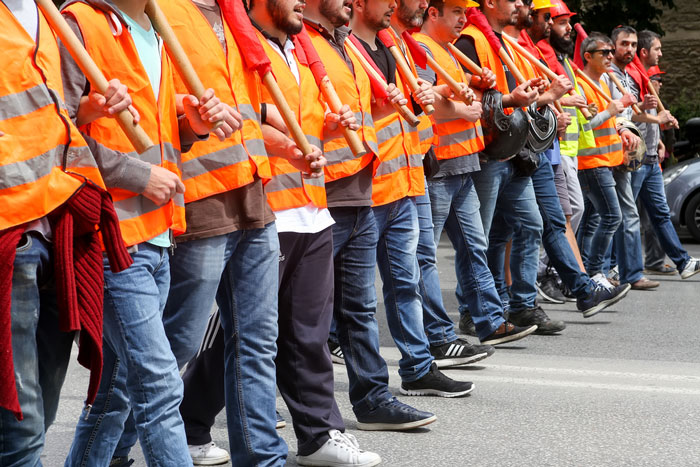 The strike was called across the public sector in response to President Emmanuel Macron’s proposed change to labour laws.

These alterations, which will freeze pay and cut 120,000 jobs, have ruffled feathers across the civil service

It makes the seventh day of strike action in the country this year and brought disruption to flyers around the world.

At least 1,000 flights were cancelled and many more delayed. The epicentres were the air traffic control (ATC) centres in Paris, Beauvais, Lyon, Nice, Marseille, Toulouse, Bordeaux and Nantes where it began at 5pm on Monday and came to an end this morning.

Thomas Reynaert, the Managing Director of Airlines for Europe (A4E), Europe’s largest airline association, said: “The impact of the seventh strike day in France this year is quite significant: airlines have been forced to reduce their flight programme by a third.

“We expected to see escalating delays throughout the day, forcing airlines to cut back on their flight programme even further.

“Given France’s geographical location, ATC strikes in France and the reduction of capacity in French airspace considerably penalise passengers passing through the continent.”

An estimated 100,000 passengers had their flights grounded over the course of the action with airlines told to cut thee out of every 10 flights.

Ryanair, already operating at a slimmed down service following the catastrophe concerning pilot holidays, cut their service down by 222 flights which affected around 40,000 people.

“We have no intention to question the fundamental right of workers to defend their interest, but we call on the French government to improve the situation. Solutions such as a compulsory 72 hours individual notification of participation in a strike, the protection of overflights while not at expense of the country where the strike originates, or an improved continuity of service have been identified. The French authorities now need to take action.”

On their website, the USAC CGT, France’s biggest ATC union, said of strike action: “We use this means of pressure only when the channels of dialogue with the administration lead to dead ends.

“In four years, there have been only seven days of national strike specific to civil aviation. None related to wages or working conditions of air traffic controllers.”