The long-lost practice of greeting and waving off loved ones as they step onto their plane may be making a comeback – at least for passengers at Pittsburgh Airport. 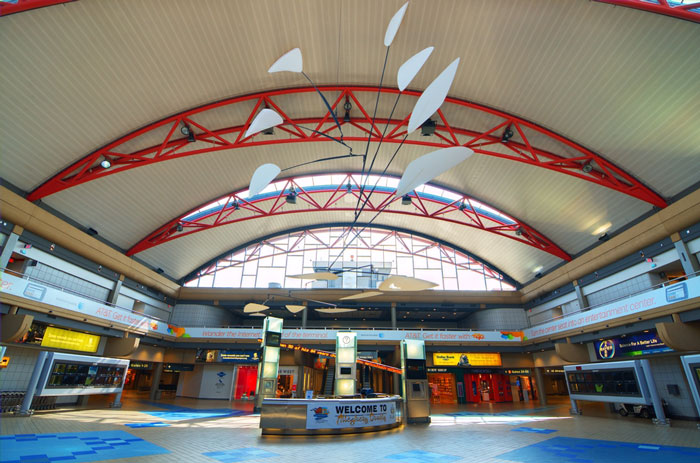 OPEN FOR BUSINESS: Airside amenities will be available to non-fliers once again

Next week the airport will become the first in America to open its doors to non-fliers who wish to get airside.

The move is an answer to the prayers of fliers and non-fliers alike, according to a senior official in the city’s local government.

With a ‘myPitpass’, diners and shoppers can enter Pittsburgh Airport to use the amenities beyond the barriers.

They will have to check in, show valid ID, and be subjected to vetting and security before they can join passengers airside.

“For years, we’ve heard from travellers and non-travellers alike who want the opportunity to shop the stores at the airport,” said County Executive Rich Fitzgerald. “Thanks to the constant work of Christina Cassotis and her team at the airport, as well as the support of Congressman Tim Murphy, we’re finally able to make that a reality with the myPITpass Program.”

“Since I started here, people have been asking about being able to escort loved ones to the gate or being able to shop and dine at the airport. We have worked closely with the TSA on this program,” Allegheny County Airport Authority CEO Christina Cassotis said. “This program builds on our successful Holiday Open House program and Airside access for guests of the airport Hyatt hotel.”

Security has not been compromised to make way for the new airside clientele as they will be subjected to the same exacting requirements as ticket holders. As such, the same rules for packaging, liquid and baggage apply. Fliers will be given priority over non-fliers at the checkpoint line.

Karen Keys-Turner, TSA’s Federal Security Director for Pittsburgh Airport, said: “The Transportation Security Administration (TSA) is pleased to support Pittsburgh International Airport on the launch of their myPITpass program, Participants should be prepared to receive the same level of security screening as travellers and should ensure they’re not carrying any prohibited items such as weapons before coming through the security checkpoint. We look forward to working with the airport on this program.”

Hours for issuing passes will be Monday-Friday from 9 a.m. to 5 p.m. The pass is only valid on the day of issuance.