The MENA Challenge: Coping with Growth

The International Air Transport Association (IATA) called for coordinated efforts to deal with the challenges of growth in the Middle East and North Africa (MENA). 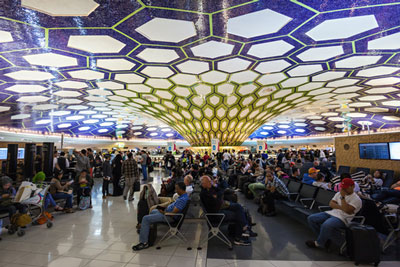 “Over the last decade, the carriers of the Middle East and North African region have grown from 5% of global traffic to 11%. Planned aircraft purchases of $200 billion over the next decade will support this growth into the foreseeable future. This expanding global presence brings with it the challenge of playing a larger role in the global aviation community,” said Giovanni Bisignani, IATA’s Director General and CEO.

The financial situation of the MENA carriers is improving. For 2010, IATA is forecasting a bottom line improvement of $1 billion on the $600 million that the region’s carriers lost in 2009. “We are expecting the region to make $400 million profits this year. A more cautious approach to capacity is helping to drive this improvement. While demand is in line for a 21% increase over last year, the capacity increase has been limited to 15.9%,” said Bisignani in a keynote address to the Arab Air Carriers Organization (AACO) Annual General Meeting in Cairo, Egypt.

For 2011, IATA expects a fall in global profitability to $5.3 billion from the $8.9 billion that airlines are expected to make in 2010. IATA expects MENA carriers to follow the trend with a reduced 2011 regional profit of $300 million. The small profit will be partially driven by an expected capacity expansion of 10.6% outstripping demand growth of 10.4%.

Bisignani highlighted five challenges of growth for the region:

Safety: The region’s hull loss rate for Western built aircraft slipped from zero accidents in 2006 to 3.32 accidents per million flights in 2009. “At 4.6 times the global average of 0.71, that is a concern. The region’s rapid growth must be accompanied with a strong safety record,” said Bisignani who challenged MENA’s governments to adopt IATA’s two safety audits—the IATA Operational Safety Audit (IOSA) and the IATA Safety Audit for Ground Operations (ISAGO)—as part of national requirements. Egypt was the first government in the world to mandate IOSA, joined later by Lebanon, Syria and Bahrain, and soon Jordan. Today, 35 MENA carriers are on the IOSA registry, including all 26 IATA members. MENA has also taken a leadership role on ISAGO. Lebanon will make it mandatory for ground handlers from June 2011 and 13 ground handlers in the region are already on the registry.

Infrastructure: The MENA region is planning airport construction totaling $100 billion, which includes at least eight new runways in the Gulf region. “The industry and governments are investing in infrastructure to support the economic benefits of aviation’s growth. But what is being built and planned on the ground is not being matched in the air. Military airspace covers 60% of the region, limiting capacity and forcing inefficient routings. We must cooperate to open more of the region’s skies,” said Bisignani. IATA is also working on projects to redesign airspace in the Gulf area, facilitate more traffic for East-West traffic across North Africa, support ultra-long haul operations with more efficient routings, and complete the implementation of reduced vertical separation minima (RVSM) across MENA by bringing Iraq on board.

Technology for Simplifying the Business: MENA is on target to meet the December deadline for 100% implementation of bar coded boarding passes which promises global savings of $1.5 billion. Airlines are 92% complete while airports are at 90%. The region is home to seven airports that are already operating 100%: Abu Dhabi, Dubai, Bahrain, Muscat, Doha, Kuwait and Sharjah. Two countries in MENA are participating in IATA e-freight—the United Arab Emirates (UAE) and Egypt. The UAE is a global top performer as the originating country for 21% of all e-freight shipments. “Jordan, Kuwait, Qatar and Saudi Arabia have all passed the high-level assessment and are expected to launch in 2011. The only hurdle is for governments to adapt their local regulations to facilitate modern business practices. E-freight is a great competitive advantage with the capability to save the industry $4.9 billion,” said Bisignani.

Government Involvement: Bisignani urged governments in the region to keep costs in check and create the regulatory framework to balance burgeoning long-haul opportunities with short-haul regional liberalization. Bisignani praised Tunisia’s decision, following an IATA intervention, to eliminate its 10% import tax on jet fuel which conflicted with the Chicago Convention. Bisignani urged the region to set correct precedents with privatized infrastructure. “We are now working with Jordan to curb unilateral increases in taxes and charges that followed privatization of its airports. To keep competitive, governments much ensure meaningful consultation and agreed investments plans,” said Bisignani, who also encouraged the region to take a more proactive approach to liberalization. “I see cutting-edge examples of liberalization as key markets such as Morocco, Jordan and Tunisia build open-sky agreements with Europe. The Damascus Convention of 2004 provides a framework for regional liberalization, but the number of countries ratifying it is disappointing.”

Environment: Bisignani noted the important outcomes of the 37th Assembly of the International Civil Aviation Organization (ICAO) that placed aviation ahead of all other industries in dealing with climate change. “Governments confirmed ICAO’s leadership role in managing aviation’s emissions and agreed on a collective aspirational goal to improve fuel efficiency by 2% to 2050, while capping emissions from 2020 with carbon-neutral growth. They also agreed to develop a framework for economic measures that minimize market distortions, treat air transport in line with other sectors, ensure that emissions are accounted for only once and recognize past and future efforts,” said Bisignani.