Belfast International Airport has announced £100,000 of savings for the first 10 months of operation of its dedicated solar plant, which generates over a quarter of the airport’s annual electricity needs. 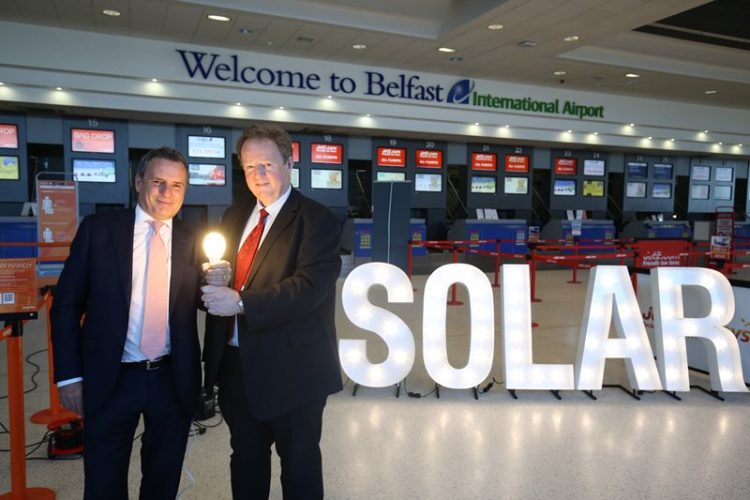 Belfast International Airport and Lightsource Renewable Energy are flying high as they reap the benefits of the airport’s switch to renewable power. The savings are making a major impact on the airport’s cost base, and will grow further as we move into the most productive months of the year.

The solar farm is located at Crookedstone Road; a third of a mile from the airport’s terminal building. Crookedstone is the largest solar energy connection to an airport in the UK and Ireland. At certain peak generation times, the airport has actually run on solar electricity alone for almost nine hours.

The Solar Farm cost in the region of £5 million to build and the local community had significant input into the construction of the project. The project was delivered with no disruption to operations at the airport. The entire project was funded, installed and operated by Lightsource, with Belfast International Airport buying the clean electricity produced by the solar farm through a 25-year Power Purchase Agreement (PPA).

In addition to the money that Belfast International Airport has saved from choosing to procure solar power, the development is also improving the airport’s environmental performance. It is estimated that the energy from the new solar farm has saved 2,100 tonnes of carbon emissions each year – equivalent to taking 469 cars off the road.

Belfast International Airport Operations Director, Alan Whiteside, commented: “The solar farm project has exceeded all expectations. From switch-on in March to the end of the year, the ‘ballpark’ savings were over £100,000. The project has won critical acclaim, and a few prestigious awards, namely the Sustainable Ireland award won by Lightsource and the Airport Operators Association ‘Best Environmental Initiative” award. The project is consistently delivering a reliable ‘green’ and cost-saving energy supply for the airport. No other airport in either the rest of the UK or Ireland has a similar energy source and we’re delighted with its operation.”

Welcoming the news, Nick Boyle, CEO of Lightsource, said: “We are really thrilled that Belfast International Airport is being rewarded for the vision that they showed in switching to solar energy with Lightsource. We worked hand in hand with the team at Belfast to deliver a project which would meet their needs. Not only has this project significantly reduced their emissions, it has significantly improved their bottom line. That’s the benefit that a Lightsource Private Wire agreement can deliver for a business.”

Crookedstone Road serves as a case study of what can be achieved by switching to solar. The savings being achieved by Belfast International are very attractive and have created a lot of interest from major energy users in the UK and Ireland. Lightsource has recently connected two projects in Northern Ireland including the largest solar project on the island of Ireland, a 32 MW site in Antrim. They now have 44 MW of solar energy projects operational in Northern Ireland.