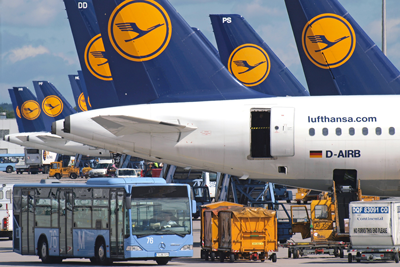 The number of passengers increased by 1.3 million, or 3 percent, over the previous year to a new all-time high of 42.3 million, and the number of aircraft movements was up by almost 4 percent. The total of 394,430 take-offs and landings represented an increase of 14,500.

Without last year’s strike-related disruptions, which led to cancellations of about 3,000 scheduled flights to and from Munich, the increase in aircraft movements would have been an even more impressive 4.6 percent over the 2015 figure. The strikes affected approximately 330,000 travellers.

The airfreight segment posted the strongest growth. The more than 334,000 tons of freight handled at the airport represented a 5 percent year-on-year increase.

“The strong gains in our traffic figures clearly demonstrate once again that growth in demand for mobility is steadily rising. This will continue in the coming year. Based on slot requests submitted by the airlines to date, we expect a 4 percent increase in aircraft movements in 2017,” said Dr. Michael Kerkloh, the President and CEO of Munich Airport.

As in previous years, the growth seen in passenger numbers in Munich is based above all on strong gains in international traffic: With about 6.8 million passengers – an increase of 5 percent – the intercontinental segment again posted the strongest gains. Demand was particularly strong for the long-haul routes to Asia, where passenger numbers rose by more than 5 percent as compared with 2015. In 2016, direct routes from Munich to both Asia and North America routes carried more than 3 million passengers (3.3 million and 3.2 million, respectively).

Once again last year, there were substantial additions to the global route network served from Munich: The 257 destinations – 10 more than in the previous year – was the most extensive range of destinations ever offered to passengers at the Bavarian hub. The number of airlines offering scheduled services in Munich increased by three to 100.