Oslo Airport to offer jet biofuel to all airlines 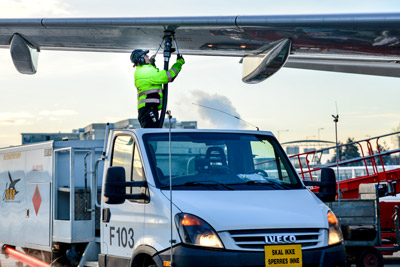 Oslo Airport has become the first international hub to offer jet biofuel to all airlines through the normal supply mechanism.

From 22 January 2016, jet biofuel will be offered to all airlines that refuel at Oslo Airport, making the airport the world’s first to offer the service.

Air BP is the supplier of the jet biofuel and Lufthansa Group, SAS and KLM have already signed agreements to purchase the fuel.

Avinor and Air BP are convinced that this represents the start of a trend toward making jet biofuel an interesting commercial option worldwide. So far, Air BP has entered into an agreement for delivery of 1.25 million litres to Oslo Airport. The goal is to gradually increase this volume in the years to come and establish regular commercial delivery of jet biofuel to Oslo Airport. Air BP has ambitions of becoming a pioneer in delivering biofuel to the aviation sector and the collaboration with Avinor is viewed as an important step in the right direction.

“Norway is committed to the transition to a low-emission society. I am pleased that the aviation sector wants to participate in this adjustment, as evidenced by the initiative taken by Avinor and Air BP,” says Minister of Climate and Environment Vidar Helgesen. “Biofuel is one of the few alternatives we have at our disposal today that can help achieve significant reductions in greenhouse gas emissions from aviation, provided that the biofuel is produced in a sustainable manner,” he emphasises.

Avinor CEO Dag Falk-Petersen says: “We are extremely pleased that we can offer jet biofuel at Oslo Airport. This is in line with climate objectives set by both Avinor and the aviation sector. We hope that this will inspire other airports to follow suit, so that we can all work towards a common goal of climate-neutral aviation.”

David Gilmour, CEO for Air BP comments: “This is the first time jet biofuel is being delivered through the normal supply mechanism, thus reducing logistics costs significantly. We want to demonstrate that airports can readily access biofuel with relative ease, utilizing existing physical infrastructure. We anticipate that this will increase interest and demand, as well as contributing to a sustainable biofuel future for the aviation sector.”

The Lufthansa group was first to confirm its participation in the project. SAS and the Dutch airline KLM were also quick to indicate their willingness to pay extra to ensure that jet biofuel could be offered at Oslo Airport. The hope is that more airlines will join in the time ahead. Airlines that take part are rewarded with lower CO2 taxes on domestic flights in Norway. Biofuel is also exempted from the EU quota system. As of today, biofuel is only produced in small quantities and costs more to produce than fossil jet fuel. However, prices are expected to fall as demand rises.

The Avinor/Air BP initiative is in line with the ambitious environmental targets the aviation industry has set for itself: Climate-neutral growth by 2020 and a 50 percent reduction in emissions by 2050, compared with the 2005 level. The EU has set a target for 3.5 percent of all aviation fuel to be biofuel by 2020.

Air BP receives the first delivery of drop-in jet biofuel from the Finland-based company Neste Porvoo via SkyNrg, a broker specialising in procuring and delivering biofuel. The jet biofuel now being delivered to Oslo Airport is produced from the Camelina plant.