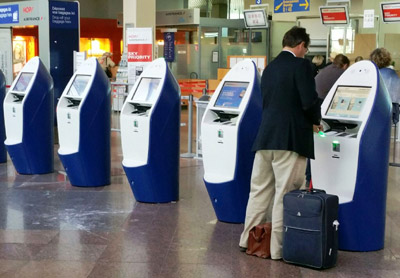 The new self-service kiosks, designed jointly by IT provider SITA alongside Air France-KLM, are now in operation at Amsterdam’s Schiphol and Paris’ Charles de Gaulle and Orly airports. The kiosks have been incorporated with features allowing to quickly and easily check-in for flights, print bag tags or purchase additional services.

SITA is deploying the state-of-the-art kiosks across 50 airports, including both Air France and KLM hub airports along with major airports in France and international outstations. SITA will also provide its global 24/7 service management of the kiosks over the next five years.

“The New Generation Kiosk project is a strategic project for Air France-KLM, aimed at significantly improving the customer experience”

Nicolas Nelson, Vice President Distributed Services IS Group, Air France-KLM Group, said: “The New Generation Kiosk project is a strategic project for Air France-KLM, aimed at significantly improving the customer experience in 50 airports worldwide. With these 765 state-of-the-art kiosks from SITA, we are providing a solution that will improve the self-service experience for check-in, self-tagging and baggage recovery.

“The initial feedback from our customers and station managers is very positive with reports of increased availability, better user interface and improved self-use ratios. This was a complex project that deserved full attention from SITA and Air France-KLM experts and management. At the end of the day it has proved to be a real success.”

The delivery of these kiosks to Air France-KLM coincides with the delivery of SITA’s 10,000th kiosk to the air transport industry. These kiosks include several new features, such as ‘chip and pin’ and contactless payment devices, which allow passengers to pay for flights, upgrades, meals or other ancillary services. They are also designed to accommodate future services, such as check-in and payments using near field communication (NFC). To support the move to self-bag tagging, the kiosks are equipped with extra storage for tags. And to facilitate responsive customer service, each kiosk is also equipped with audio and camera features for remote support from airline staff.

Dave Bakker, SITA President, Europe, said: “We worked closely with the Air France-KLM team to capture their needs throughout the design process. These SITA kiosks provide the usual check-in services for passengers and are designed to support the growing trend of self bag-tagging. However, they also include ‘chip & pin’ payment devices, which allow the airline to extend the range of kiosk services. Passengers have shown their preference for using kiosks and this major investment by Air France-KLM will give passengers exactly what they want.”