National Air Traffic Systems has launched the largest airspace change in the UK, removing long-established air routes over Scotland and allowing aircraft to choose their most direct flight path. 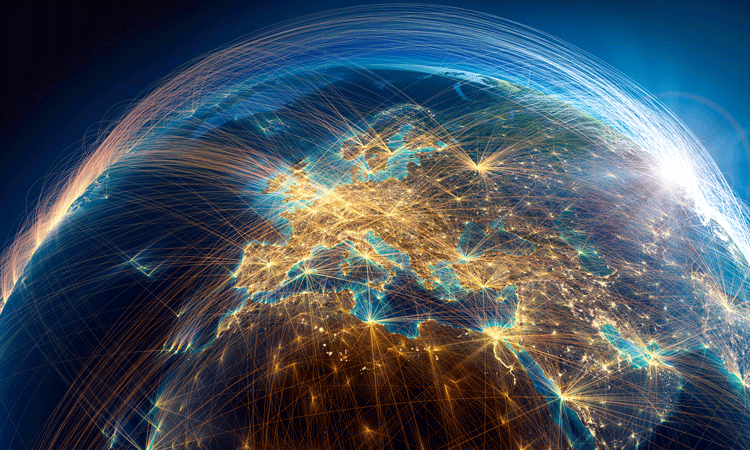 National Air Traffic System (NATS) has implemented the biggest ever geographical airspace change in the UK, removing long-established air routes over Scotland and freeing aircraft to choose their most direct flight path.

With up to 2,000 flights using this crucial part of UK airspace every day, and supporting 80 per cent of transatlantic traffic, this introduction will save CO2 every year equivalent to the power used by some 3,500 family homes (12,000 tonnes CO2/year).

The new Free Route Airspace (FRA) covers approximately 150,000nm2 of airspace over the North Sea, Scotland, North Atlantic, Northern Ireland and a small portion of northern England – a footprint over twice the size of the UK. The new design has no noticeable difference on the ground, only affecting aircraft at a high-level above 25,000ft.

NATS has been developing the Free Route Airspace (FRA) concept in UK airspace for over five years. It allows airlines freedom to take the optimal route considering variables such as weather and wind speed – flexibility that seemed impossible in the past. But as technology has moved forward and cross-border collaboration has evolved it has become a reality today helping to reduce cost, fuel burn, flight time, and CO2 emissions.

By 2030, the aviation industry is targeting an overall reduction of at least 15 per cent in net CO2 emissions relative to 2019, and a 40 per cent net reduction by 2040. While the greatest CO2 savings will be made through new aircraft and engine technology, these are still many years away, and even sustainable fuels are unlikely to be available on a significant scale this decade. In the short term, managing our airspace more effectively, and flying more efficiently, can play a crucial role, and that’s where NATS’ introduction of airspace modernisation comes in. The introduction of Free Route Airspace over Scotland marks a leap forward for airspace modernisation in the UK and an important step towards achieving net zero by 2050. 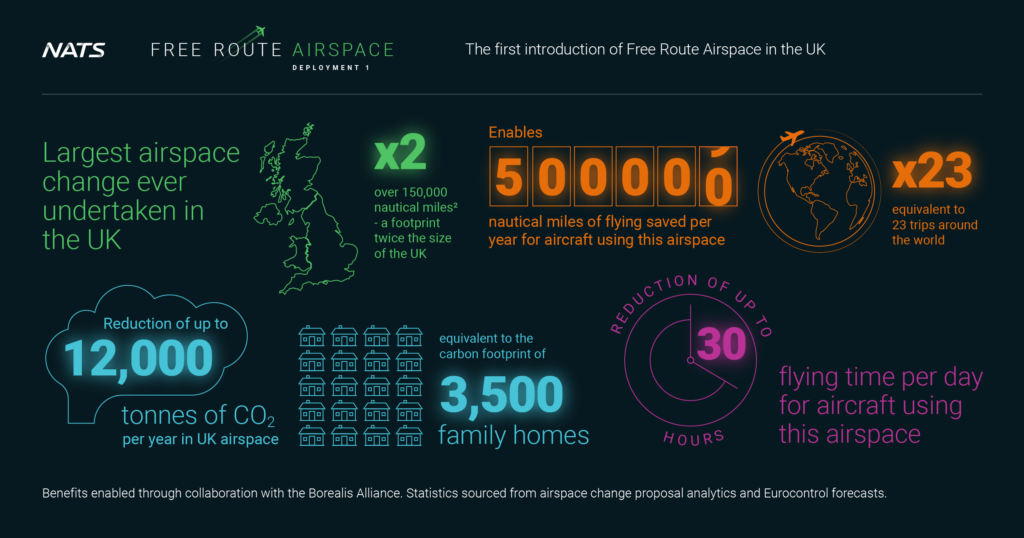 The announcement, which is in line with the government’s modernisation policy, was welcomed by Aviation Minister, Robert Courts, who said: “Airspace modernisation will ensure flights are quicker, quieter, and cleaner, and I welcome NATS’ first deployment of Free Route Airspace in the UK as part of this. I look forward to seeing further progress on the airspace modernisation programme, which will be key in helping us reach net zero emissions by 2050.”

Lee Boulton, Head of Airspace Development commented: ”The routes traditionally used were decided many decades ago, when navigational techniques and aircraft technology were very different. At the time it made sense to think of routes much like fixed motorways in the sky – to get from A to B you would travel along one corridor until you got to a junction that let you change direction towards your destination, which is often not the most direct route.

“The removal of all upper air routes in approximately one third of UK airspace allows airlines to fly the most fuel efficient and timely routes. It will support the industry’s recovery from COVID-19 by improving efficiency, reducing flight times, and reducing emissions equivalent to that of 3,500 homes every year. Despite the challenges caused by the pandemic, NATS is continuing with plans to modernise airspace over the coming years.”