Rotterdam The Hague Airport has become the first airport worldwide to be accredited for the first time at the highest level of the ACI ACA programme. 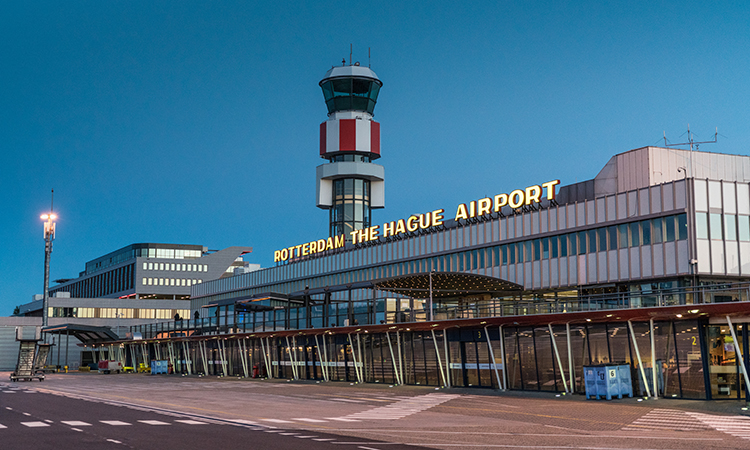 Rotterdam The Hague Airport (RTM) in the Netherlands has achieved Level 4+ ‘Transition’ of Airports Council International’s (ACI) Airport Carbon Accreditation (ACA). The successful first-time accreditation at the highest level of the renowned CO2 reduction programme is a worldwide first and a testament to the airport’s exceptional carbon management strategy, which is fully aligned with global climate goals.

Attaining Level 4+ represents a step change in the carbon management of an airport, requiring the setup of a long-term goal and strategy oriented towards absolute emissions reductions, including an emissions trajectory and interim milestones. Rotterdam The Hague Airport’s actions to realise tangible CO2 emissions reductions of its own emissions are now aligned with the Paris Agreement (global warming limited to below 2°C and ideally 1.5°C).

The airport has also included broader emissions in its carbon footprint that include all of the significant operational sources on- and off-site. Furthermore, it has demonstrated evidence of actively engaging and leading its stakeholders towards delivering emissions reductions.

Amongst other activities, the airport’s actions include investment in 100 per cent renewable energy powering their terminal and buildings, on-site solar power generation and a new contract for airport vehicles in 2021 with stringent sustainability requirements. The foundation Rotterdam The Hague Innovation Airport (RHIA) is also working with authorities, business and knowledge institutes to stimulate and trial innovations. Finally, the airport has compensated for residual emissions with CDM GOLD STANDARD credits, which will provide clean sustainable electricity to local grid in rural India.

“Level 4+ accreditation is a recognition of our efforts in recent years to weave sustainability into the airport’s DNA and into our plans for the future,” said Michelle Samson, Strategy and Sustainability Advisor at Rotterdam The Hague Airport. “As an airport, we want to reduce our impact on the environment and the climate and thus assume our social and environmental responsibility. We have a goal of becoming emission-free for all airport ground operations in 2030 and all land-related activities by 2045. With Level 4+, all steps towards achieving this objective have now been independently assessed and accredited.”

Olivier Jankovec, Director General ACI Europe, said: ‘’We are thrilled to see Rotterdam The Hague Airport becoming the first airport in the world to join the Airport Carbon Accreditation directly at the recently introduced Level 4+. This achievement demonstrates the airport’s firm commitment to invest in a more sustainable future for aviation and for the region that it serves.”

He added: “By setting the target to reach net zero CO2 emissions by 2045 and including third party emissions into the target scope, Rotterdam The Hague Airport is clearly leading the way in working towards decarbonisation. It is also aligning its strategy with the new European Union (EU) climate goals. This recognition is also a clear signal that, despite the lasting impacts of the ongoing crisis, airports of all sizes are strengthening their commitment to operate in a more sustainable way and to protect their local communities from climate change.’’