The use of the tow tractor supports Munich Airport’s climate protection goals, which include to be completely carbon-neutral by 2030. 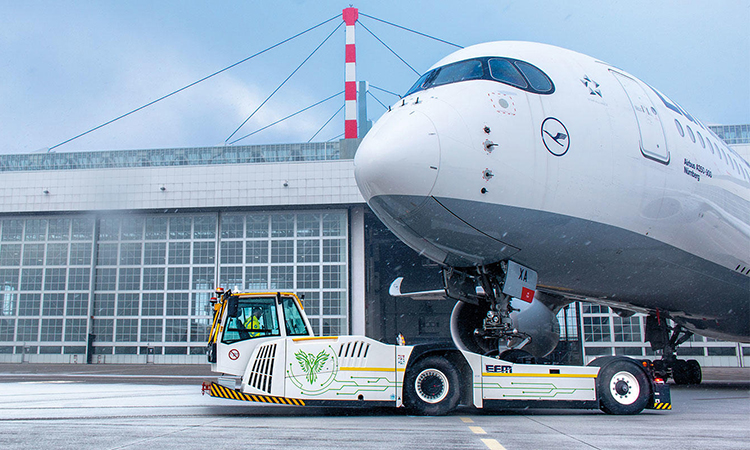 Credit: Munich Airport - The "PHOENIX" E aircraft tractor and a Lufthansa Airbus A350.

New in use at EFM – the company for de-icing and aircraft towing at Munich Airport – is an aircraft tow tractor equipped with the latest 700V lithium-ion battery technology, which can effortlessly tow passenger aircraft up to a take-off weight of 352 tonnes – and, thus, also wide-body aircraft.

The vehicle – named after the mythical miracle bird, Phoenix – achieves speeds of up to 32km per hour with consistently high tractive power. Through short intermediate charging, reliable round-the-clock operation is possible with the pioneering and completely emission-free “PHOENIX” E.

If the loading capacity is ever insufficient, “PHOENIX” E is also equipped with a range extender that enables operation with diesel in exceptional cases. Compared to conventional diesel tractors, the maintenance effort is significantly lower.

With the deployment of the all-electric aircraft pushback tug, EFM – a joint subsidiary of Lufthansa and Munich Airport – is making a contribution to Munich Airport’s climate protection goals, which are to be operated in a completely CO2-neutral manner by 2030, at the latest.

To achieve this ambitious goal, Munich Airport is implementing a wealth of technological innovations in all areas and has massively expanded not only the proportion of electric vehicles in its fleet, but also the charging infrastructure. Climate protection in aviation is a joint task: Airport and airline, ground handling services and manufacturers of equipment and vehicles pursue the common goal of advancing the decarbonisation of air traffic.