The biodegradable bags will be trialled at security checkpoints in three airports managed by AGS Airports’ – Aberdeen, Glasgow and Southampton. 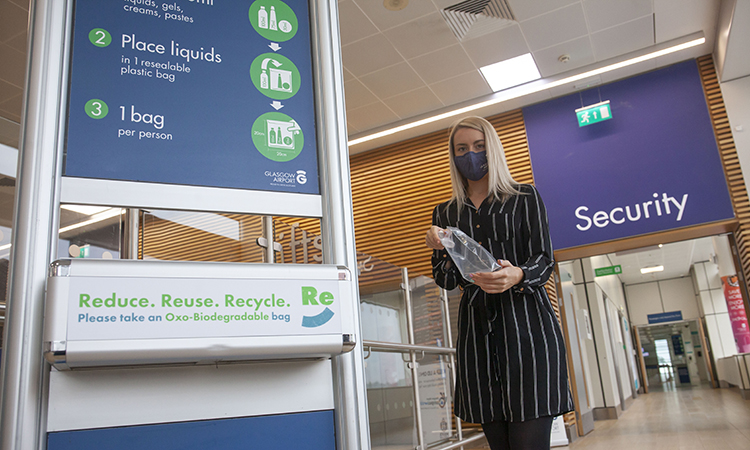 The new sustainable bags will now be available, free of charge, to passengers in the security areas at Aberdeen International Airport (ABZ), Glasgow Airport (GLA) and Southampton Airport (SOU).

By introducing the Oxo-Biodegradable version, AGS Airports will remove more than two million single-use plastic bags each year from across the group.

The technology involved ensures that the product will begin to degrade over a selected period of time – between 17 and 24 months of a bag’s lifespan – down to a natural biomass, rather than the more damaging micro-plastics associated with single-use alternatives. Each bag can also be reused and recycled prior to the beginning of the degrading period.

Chief Operating Officer at AGS Airports Ltd, Mark Johnston, said: “We are proud to be the first group to trial these new Oxo-Biodegradable security bags, which will significantly reduce single-use plastic consumption across our three airports. Finding a suitable alternative that met both our security and operational requirements while retaining the necessary resilience that the bags require was a challenge, so we’re really pleased to be able to trial a product that can not only be re-used and recycled, but also provides our passengers with the assurance that they are also supporting our efforts to support the environment.”

The switch to Oxo-Biodegradable security bags is the latest sustainable initiative introduced to help reduce AGS Airports Ltd’s carbon footprint. In 2019, Glasgow became the first airport to introduce a fleet of three Scottish-built fully electric buses to its operation and invested more than £200,000 to deploy eight petrol/electric plug-in hybrid vehicles across its airfield operations.

The group has also joined over 200 airports across Europe in signing ACI Europe’s NetZero 2050 pledge; a commitment to achieving net-zero for the carbon under its control by 2050. At a UK level, AGS is a signatory to Sustainable Aviation’s decarbonisation roadmap, which is the first national net-zero aviation commitment anywhere in the world.

Each year, more than eight million tonnes of single-use plastic ends up in the world’s oceans and seas, and it can take up to 500 years for a single plastic bag to degrade.

Using Oxo-Biodegradable in the normal manufacturing process of plastics accelerates the natural process of oxidation. Oxidation reduces the molecular weight of the polymer in a much shorter timescale, until it is no longer a plastic and can be gradually bio-assimilated by bacteria and fungi on land and in the ocean.