By building a federal inspection station, the airport can expand U.S. Customs and Border Protection capabilities to 400 passengers an hour. 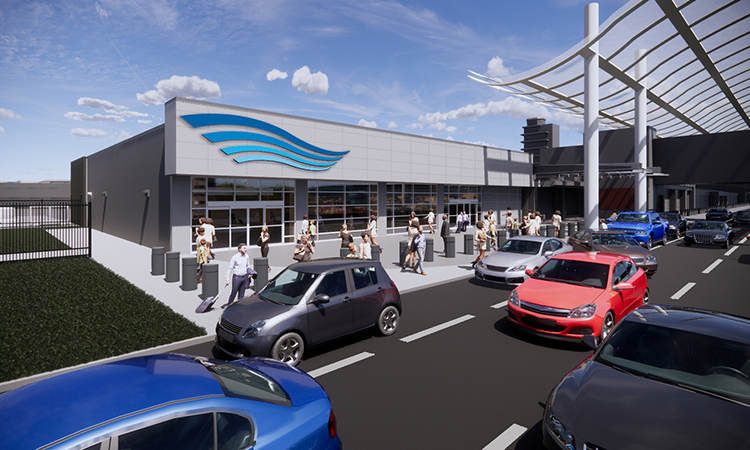 Gerald R. Ford International Airport (GRR) has announced that it has broken ground on Phase I of a new federal inspection station (FIS), which will ultimately allow the airport to support non-stop international commercial passenger flights.

Phase I of the construction project, which will take place on the east end of the terminal, will include a new baggage claim area, restrooms and operations infrastructure that will be used for domestic flights until the full federal inspection station project is complete. Conversations have begun at the federal level for a full facility build out, but a timeline is not in place for completion.

The federal inspection station is part of Project Elevate and one of three new developments for Gerald R. Ford Airport to accommodate projected passenger growth over the next 20 years. With support from Senator Peter MacGregor, former Senator Dave Hildenbrand, former Representative Chris Afendoulis and The Right Place, Project Elevate secured a $5 million grant from the MEDC to begin work on kerbside improvements needed for the facility, which is expected to cost a total of $30 million.

No local taxpayer dollars will be used to finance Project Elevate, which will be paid for with a combination of federal and state grants, municipal bonds issued by the airport and user fees.

President and CEO of Gerald R. Ford Airport, Tory Richardson, said: “Phase I of this project is an important step forward as we work to bring direct international travel to West Michigan. Creating this additional space will signal to the federal government that we are serious about creating an FIS at Gerald R. Ford Airport while offering us needed additional baggage claim area in the meantime. We are thankful for funding from the MEDC, which required us to begin this project now. While our numbers, like those of every airport around the country, have been impacted by COVID-19, we have seen steady growth in the number of passengers throughout this summer and are ahead of our projections.”

Currently, the airport cannot process direct international arrivals, other than private aircraft. When a private aircraft lands at Gerald R. Ford Airport from an international airport, U.S. Customs and Border Protection (CBP) agents meet and screen the passengers at the aircraft. Without the dedicated screening facilities of an federal inspection station, CBP’s screening capacity is limited to small aircraft.

The addition of a federal inspection station will provide a permanent home at the airport for customs officers, allowing CBP to consolidate multiple locations into a single facility. The airport will eventually build a corridor from Concourse B that will lead to a dedicated customs area, complete with screening equipment, security, holding cells and other federal inspection station requirements. When fully built out, the facility will be able to screen 400 passengers per hour.

Dan Koorndyk, Board Chair of the Airport Authority, said: “As we continue to emerge from the pandemic, we know our community is anxious to get out and to explore. We look forward to enhancing the gateway to West Michigan by providing our guests with a convenient, comfortable travel experience in state-of-the-art facilities.”

Announced in August 2019, Project Elevate was slated to get underway in spring 2020 but was delayed because of the coronavirus pandemic. In addition to the federal inspection station, Gerald R. Ford Airport plans to expand Concourse A and relocate the current air traffic control tower to the east side of the airfield. Expansion of the terminal apron, which is a critical component to Concourse A, will be completed in the coming weeks.