A range of art installations, designed by Gordon Huether, have made their debut as part of Salt Lake City Airport’s expansion. 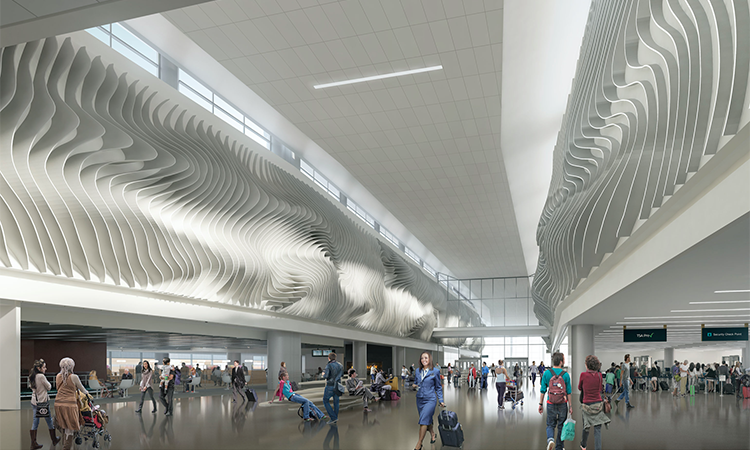 Set for full completion in 2024, the project will grow the transit hub as one of the nation’s busiest while focusing on prioritising a healthy, safe and enjoyable passenger experience within the next generation of airport design.

The innovative approach to the design of the Salt Lake City Airport redevelopment, led by HOK architects, centres around the passenger experience by creating a unique environment for patrons as they travel to their final destinations. Featuring more efficient passenger flow, state-of-the-art conveniences and amenities and high environmental standards, the redevelopment also incorporates visual aesthetics befitting one of the U.S.’ newest airports.

At the direction of city and airport executives, several major, structurally-integrated art installations have been incorporated into the design from the early stages of development to create a strong identity and sense of place. Designed by Huether, these massive art installations help to define and enhance the passenger experience by bringing the natural wonders of Utah into the physical space of Salt Lake City International Airport.

Huether said: “The prime objective from the start was to celebrate the natural beauty of Utah in a fully architecturally, integrated art programme. The big idea is to blur the lines between art and architecture. If there was ever a time that art mattered, where art should transport you to a higher place, where art could unite us in inspiration, nature and beauty, this is that time.”

An app to help restore passenger confidence in air travel