With the unpredictability of weather forecasts, and the little warning Frankfurt Airport often receives before the onset of snow, grounds operations team must be ready for all eventualities. Here, Fraport AG reveals how winter operations are streamlined at Frankfurt Airport. 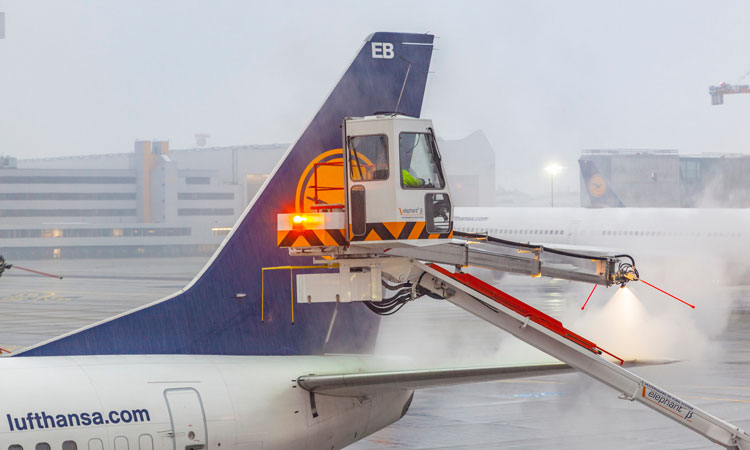 Over the years, snowflakes have become a rare sight at Germany’s largest aviation hub. But, as soon as snow and ice hit Frankfurt Airport (FRA), winter operations must work fast and efficiently. The overall aim is to ensure passenger safety – and to keep the mega hub running.

Working in a rotation, 381 specialised vehicles such as runway sweepers, snow blowers, spreading trucks, telescopic loaders, and runway friction testers, work on a three-shift-system during winter season. The ground operations team use 3.3 million litres of de-icing agent, 200 metric tonnes of granulated agent, 750 metric tonnes of salt, and 160 metric tonnes of sand to clear the ice and snow.

A single snow-clearing convoy comprises 21 vehicles in formation, which is as wide as an eight-lane motorway. Usually, clearance requires up to 30 minutes per runway. “It can even take longer than an hour, when heavy snow falls continuously beyond six hours,” explains Daniel Lütscher, Head of Fraport AG’s Infrastructure – Airport Facilities and Area Services Department. “We make up for time as early as possible.” When snow or ice is forecast, weather commands on controlled aprons alert the winter operations team. In a small convoy of 20 people the team spreads ground surface de-icer well before the first snowflake hits the ground, which saves at least two hours.

Four types of alarm notify the winter operations team. Type four, the most extreme, requires full action: 155 manned vehicles move out on to the apron and the runways in up to five convoys. “By mid-January this season, we had two days of snowfall with a type four alarm,” says Lütscher. During last season, FRA had seven days of snowfall, and the season before last the airport witnessed five days. Compared to airports in other parts of Europe, such as Oslo, this sounds minimal. But as soon as action is required, things need to work with 100 per cent efficiency, no matter which airport is affected.

This is why Fraport, the hub’s operational company, considers snow and ice management a year-round operation. Currently, 1,314 employees work with the harsh wintry conditions on the apron, the runways, and the aircraft. Removing ice and snow from an aircraft’s crucial parts such as the wings is performed by Fraport’s N*ICE subsidiary. Overall, expenditures for winter services average €21 million each winter for staff, surface de-icing agents, vehicles, and maintenance.

As soon as winter operations end at Frankfurt Airport, by late-March, preparations for the next season begin. Management takes stock – do we need more staff, vehicles, de-icing agents? Do we need to change workflows? Planning and scheduling of training for the new season begins; extensive theoretical training sessions run throughout the year. In summer, when temperatures on the apron rise to 40˚C, the ground operations winter services team undergoes its first practical operational run. Four full rehearsals in November ensure well-studied process flows and smooth operations. “The aim is to familiarise all team members with the various special-purpose vehicles and to study the clearing concepts for the runway system in depth,” explains Lütscher. Videos that show every step involved in manoeuvring vehicles complement the on-sight training sessions.

Lessons learnt from previous years enable management to change, enhance and adapt winter operations strategies and processes the data continuously, to ensure the best service is delivered. Nowadays, automatic alarm calls instead of personal phone calls make it easier and quicker to alert teams. “To ensure enough staff are available, we recruited several hundred colleagues who usually work in administrative areas to support winter operations,” explains Lütscher. For example, upon arriving at the airport for a weekend shift starting at 5am, they swipe their employee identification badge through a scanner and are immediately allocated to one of the convoys and vehicles.

In the future, autonomous vehicles might become part of the snow-clearing convoys. As early as 2016, Fraport, together with Daimler, tested automated runway sweepers at the former Pferdsfeld airfield in western Germany. This winter, Oslo Airport is aiming to test autonomous vehicles in live action. “We are in close contact with our Norwegian colleagues and are following their tests with great interest,” says Lütscher. “Autonomous vehicles are still at an early stage of development and some questions remain unanswered.” For instance, while the runway is cleared, take-off and landing movements are put on hold. In the very exceptional case, of an emergency landing for instance, the manned snow-clearing convoys instantly move to the side of a runway to give way. “Currently, autonomous vehicles are not able to react as quickly as this – or to react at all. Nevertheless, autonomous vehicles might become an option for our winter services operations in the near future.”

In early summer, FRA’s winter operations team will move to a new facility now being built to the north of the airport. “We will then be able to gather all vehicles at one place and to put the team into action from one central point at the airport,” says Lütscher. Close to the new building, the de-icing agents will also be centrally stored in the future. In addition, the company is investing in new supply vehicles.

Weather conditions can never be precisely forecast and may change quickly. As such, we have to be prepared for all eventualities all of the time. When visibility is impaired, the separation distances must be increased during take-offs and landings, to accommodate the change in conditions. Despite all preparations and actions taken in the air and on the ground, harsh or changing weather conditions may lead to flight delays or cause short-term flight cancellations. If flights are cancelled by the airlines at short notice, transfer passengers may become stranded on the ground in the terminal transit areas. In these situations, special Fraport teams provide sleeping cots, blankets, food, beverages and other services to make passengers’ unexpected stay tolerable. Alternatively, when there is enough advance notice about severe weather conditions, airlines may decide to prioritise their flights and re-book passengers. In addition, for short travelling distances they can check train availabilities with Deutsche Bahn, and because FRA is one of the world’s best-connected intermodal airports, this can be a convenient alternative for many travellers.

Daniel Lütscher has in-depth knowledge of Frankfurt Airport (FRA) and its infrastructural and operational processes. He started his career at FRA 26 years ago as a trainee for office management. Winter 2018/19 marks his third season as head of Fraport AG’s Infrastructure – Airport Facilities and Area Services Department. In this role, he is responsible for FRA’s winter services, as well as for the management of the airfield lighting system, the people mover system, and the passenger boarding bridges.

Preparing JFK’s T4 for the new normal of air travel