Winter operations: Winter is a state of mind

Occasional blasts of severe winter weather are a fact of life at Toronto Pearson International Airport. For Craig Bradbrook, Vice President of Aviation Services, the key to minimising their impact is ensuring that everyone shares a belief in the value of collaboration. 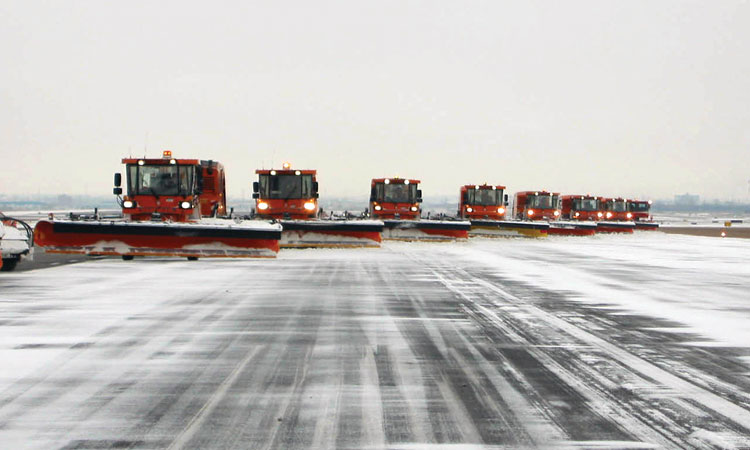 Canadians often complain about winter. But they also take pride in their ability to cope with its challenges. After a major blizzard, people exchange war stories about how long it took them to get to work – but the point is they persevered and they got there.

The same attitude prevails at Toronto Pearson, Canada’s largest airport and North America’s second-busiest hub measured by international traffic. When we’re hit by snow or freezing rain, which can happen anytime from November through to April, one question is top of mind for the Greater Toronto Airports Authority (GTAA) and our airline partners: how can we work together to manage expectations, keep flights moving and hold as closely as possible to a regular schedule?

Traffic at Toronto Pearson, which exceeded 41 million passengers in 2015, has grown by about seven per cent in each of the past two years, and that pace shows every sign of continuing. As a result, when winter weather turns severe it just adds a further layer of complexity to the already daunting challenge of maintaining smooth operations. This pressure to keep traffic flowing is felt even more by our carriers, who work constantly to optimise schedules and deploy more efficiently configured aircraft. Even a relatively minor winter storm can cause costly delays to regional services. If a long-haul flight takes a protracted delay, the domino effect on the airline’s operation can be significant, threatening both revenue and passenger loyalty.

This consciousness of the human factor frames our overall winter operations strategy at Toronto Pearson. As the global connection point for a city of 6.5 million, we serve a two-hour-flight catchment area that is the largest in North America, with a population exceeding 150 million. So when it comes to dealing with winter, a lot of people are counting on us to get it right.

Faced with light or even moderate snowfall, our goal at Toronto Pearson is to keep all flights operating safely with the minimum possible delays. It takes about 15 minutes to clear each of our five runways. If snow is falling at a rate of one cm per hour, as soon as one snow-clearance circuit is complete, it’s time to begin the next. Meanwhile, the apron areas are being cleared constantly to ensure that aircraft can be serviced efficiently.

Around 180 people work on snow removal in 12-hour shifts, with each shift team operating up to 30 pieces of equipment for plowing, sweeping, snow-blowing and surface treatment. In addition, a full backup team is always on call to provide extra support as needed. Work conditions can be tough. While equipment operators ride in heated cabs, others – from crews shovelling snow around the gates to electricians maintaining the runway lights – often face temperatures in the minus double-digits, with wind-chill effects that feel even colder.

The snow in Toronto tends to be wet, which makes it difficult to clear quickly, and when compacted, it quickly turns to ice. Before a storm hits, we may apply potassium acetate to paved surfaces as a preventative anti-icing treatment. After snow plowing, we use sodium formate to melt the underlying ice. These agents are used judiciously; any runoff is monitored by the airport’s extensive stormwater management system and diverted as necessary to sanitary sewers.

Beyond the need for environmental sustainability, treating runways is also expensive. And when the difference between simple rain and hazardous freezing rain can be a last-minute fluctuation of one degree, we have to be constantly refining the art and science of deciding exactly when to take appropriate measures. Innovative technology certainly helps. For instance, we use in-ground sensors to monitor temperatures at the pavement surface – a critical piece of data in predicting the potential flash-freezing of rain or melting snow.

Additionally, we constantly invest in clearing equipment, such as high-performance snow blowers that can remove up to 7,500 tonnes an hour. But in the end what counts most during a storm is how people from diverse organisations work together. When a busy Air Canada ramp crew pushes an aircraft back briefly from the gate so we can get in to clear the apron, it’s clear that everyone is focused on a common goal.

Close coordination among multiple players is equally critical in aircraft deicing. Toronto Pearson’s Central Deicing Facility (CDF) is probably the largest centralised facility of its kind in the world – a 26-hectare site with six bays that can service up to a dozen narrow-bodied planes at once. It’s a highly efficient operation today but an additional deicing facility will be needed in the near future in response to the steady rise in traffic at our airport, and as the proportion of wide-bodied jets in the schedule grows.

To ensure we always have deiced aircraft ready to depart, we set an hourly target 20 per cent higher than the runway launch capacity established by NAV Canada, which manages all traffic in and out of airport. But of course maintaining a steady flow throughout the hour depends on carriers getting their aircraft off the gates and over to the CDF. And faced with constantly changing weather conditions, not to mention the requirement that planes held in queue too long must go back for further deicing, trying to orchestrate an optimal number of departures is a bit like playing three-dimensional chess ­– except in this case everyone wins through responsive, respectful collaboration.

In January 2014, unusual weather conditions – a sequence of rain, snow, sudden squalls and an extreme temperature drop with wind chills as low as -39ºC – caused a service disruption that brought into relief the winter operations challenges faced by our airport. It also provided an opportunity to revisit the priorities we’ve set with our carriers and other partners to deliver the best possible passenger experience.

Two years on, we’ve introduced a number of operational changes, including redesigned shift patterns to deploy staff more effectively, and the expansion of our Emergency Operations Centre to better coordinate the efforts of the GTAA, our airlines and other service providers. Indeed, much of our collective energy has been focused on fostering closer collaboration among all Toronto Pearson stakeholders. We’ve established protocols to ensure consistent and frequent communications to passengers as winter weather events unfold. A new page on our website provides timely travel updates and is the default homepage during a disruption. Extended Wi-Fi and cellular coverage helps keep everyone connected even when demand spikes. Our mobile app pushes up-to-the-minute information to subscribers in our terminals. And all 1,200 GTAA employees have been briefed on guidelines for addressing passenger needs during a winter event – right down to making sure essential items such as diapers and drinking water are readily available.

The common goal behind all of these efforts is to better handle passengers’ expectations. People understand that bad weather can impact an airport’s operation and cause flight delays. But they naturally expect to have the latest information as a situation evolves. And to deliver on that, the various organisations that work together at Toronto Pearson need to communicate clearly among ourselves.

The key players at our airport have always had well-defined roles and responsibilities. The difference now is that we understand more about each other’s businesses, the goals we share in common and how we can better align our efforts to achieve them. When adverse weather is heading our way, everyone is alerted early, and a core group meets quickly to prepare. There are open and frank discussions as the group weighs competing priorities – other than safety, which is an ironclad priority for all. The result is a coordinated response that balances the perspectives of NAV Canada, airline operations managers, the CDF, ground handlers and all other groups who help to keep flights coming and going.

As bad weather begins to have a direct impact, consultations continue via newly created intersection points between organisations. For example, a performance manager from Air Canada, our largest carrier, is now embedded within the Integrated Operations Control Centre, which oversees airport activities around the clock. And joint operational decisions are now routed through the Airport Duty Manager, a role within the GTAA that has been elevated to ensure a single point of contact and a unified view of all interrelated efforts.

For our collective winter operations team, the definition of a ‘perfect storm’ is one that has virtually no impact: the runways get cleared, planes are deiced and passengers come and go with minimal delays – leaving the 40,000 people who work at Toronto Pearson to swap war stories about what it took to make that happen. Of course, some storms are simply too big to get ahead of, affecting airports throughout our region, diverting flights across the continent and causing missed connections on the other side of the world. But amidst all of the unpredictable elements, one thing is certain: the best response is driven by collaboration and explained at every step through direct, transparent communications. Because while we can’t change the weather, we can change our ability to meet the expectations it creates. Winter isn’t just a season – it’s a state of mind.