Last year Denver International Airport (DEN) was hit by a historic storm which tested its snow-removal operations to the limit. Director of Airside Operations, Bruce Goetz, reveals how the airport used those events to further refine its world-class snow programme. 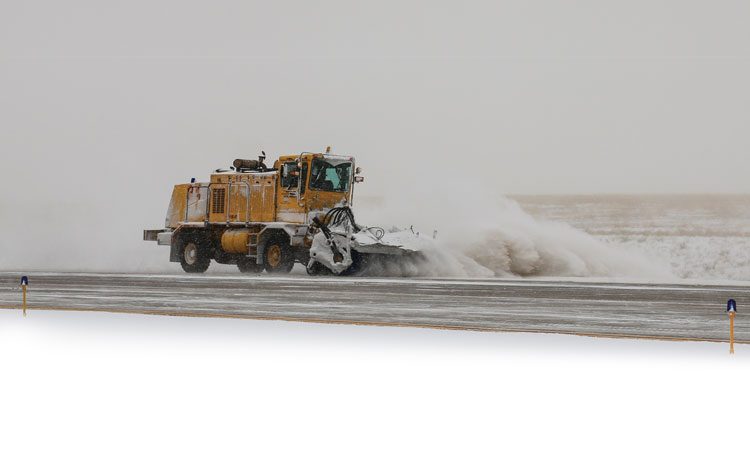 On the morning of 23 March 2016, the forecast for Denver called for snow. The airport’s operation team, working with the National Weather Service, originally predicted 2-4 inches of snow spread out over many hours – nothing the Mile High City hadn’t seen many times before, and certainly nothing that DEN hadn’t successfully managed countless times with one of the most experienced snow operations around.

But what began as a routine snow event quickly became a series of unprecedented challenges for the airport as the weather turned into an unexpected blizzard that dumped 22.96 inches of snow in just a few hours, knocking out power to key airport systems and leading to the full closure of the largest airport in the country for seven hours.

During the height of the storm, sustained snowfall rates of two inches per hour were combined with sustained winds of 50 knots and zero visibility. These conditions made it too dangerous to drive on the airfield – for pilots, snow crews and airport operations vehicles – forcing the airport to close until the storm cleared out later that evening.

The March blizzard was one of only two times in DEN’s 21-year history that inclement weather led to the formal closure of the airport. It was a significant snow event that took forecasters, the airport, airlines and the FAA by surprise, and created a perfect storm of events that challenged one of the world’s most tested and experienced snow airports. The storm resulted in more than 1,300 flight cancellations and the closure of the primary access road to DEN’s iconic Jeppesen Terminal.

But with significant challenges also come opportunities, and DEN has used the March blizzard and other past storms to further refine a world-class snow programme that continues to evolve with technology, planning and lessons learned.

DEN is big – really big. At 53 square miles, or more than 34,000 acres, DEN is larger than the island of Manhattan, the city of San Francisco, and the city of Miami. This size is a huge asset that allows for the airport to essentially double its existing runway, terminal and concourse space to accommodate well over 100 million passengers per year in the decades to come. But, this size also presents logistical challenges when it comes time to clear all that surface area of snow.

With a seasonal average of 55 inches of snow per year, Denver has never been a stranger to winter aviation operations. Since it opened in 1995, DEN has continued to refine its snow-removal operations every year. The result of that work is a snow-removal programme that uses a blend of cutting-edge technology and state-of-the-art equipment to maintain efficient and safe airfield functionality for the airlines and the FAA in all but the worst of conditions.

A full decade prior to the 2016 blizzard, Mother Nature handed Denver back-to-back December 2006 blizzards that dumped more than 20 inches of snow on the Denver metro-area with winds that stacked the powder 6 feet deep in some areas. That historic and sustained snowfall forced DEN to close for two days as aircraft, vehicles and support equipment were unable to safely operate in the tough conditions.

Following the 2006 blizzards, DEN began an overhaul of its snow-removal programme. The resulting plan included newly-prioritised snow removal areas and equipment routes, revised staffing plans and equipment upgrades. DEN purchased multi-function machinery that can plough, sweep and blow snow, and some can even spread liquid and sand products at the same time. Those investments continued in 2015, when the airport invested in five new pieces of state-of-the-art multi-function equipment at a cost of $621,000 each.

DEN now utilises about 250 pieces of airside snow-removal equipment to plow runways and taxiways and an additional 120 pieces of equipment for DEN’s substantial landside operations. Those responsibilities include clearing 300 lane miles of roads (more than the distance from Denver to the Utah border) and 30 acres of parking lots with a total of 44,255 parking spaces. The ramp area alone is so massive that the area between concourses can accommodate the side-by-side taxiing of four 747-400 aircraft. To tackle the challenge of ramp snow removal, the airport utilises a contractor to deploy 10 snow melters that melt 600 tons of snow per hour.

The runway teams consist of a combination of multifunction equipment from Oshkosh, MB, and Boschung, plus dedicated brooms, blowers, chemical trucks and sanders. During a snow event, the airport is split into east and west snow teams and each side of the airport is operated independent of one another with the east airfield runways generally being used for arrivals while the west side is typically used for departures. The runway teams are organised to move down the runway in a single pass, from edge-to-edge, in a wedge formation. The front of the wedge consists of the multifunction equipment and dedicated brooms and blowers, followed by chemical trucks, sanders and finally by a friction measurement vehicle.

In 2006, the airport also added a ‘Snowman’ position in the FAA control tower, to coordinate runway closures with snow crew movement. This position has streamlined the communication between the snow removal team and the FAA, and has bolstered the relationship and level of trust between airport operations and the FAA. The Snowman also participates in the FAA’s Command Center conference call, which is held every two hours throughout the day, to provide insight into the airport’s snow removal plan and provides the FAA and stakeholders with the ability to give input to the plan.

The airlines, FAA and DEN staff also work together to manage the arrival rate so as not to overwhelm the airport. Called the ‘Strategic Throughput’ programme, this concept seeks to balance arrivals with departures from the de-ice pads by slowing the arrival rate to match the departure rate. Without this programme, numerous arrivals can overwhelm the ramp area blocking access for arriving aircraft and preventing others from pushing from the gate. In 2014, DEN implemented a customised version of the Aerobahn Deicing Manager software, which uses a network of sensors to help the airport and airlines predict the best time for each aircraft to push back from the gate, how long it will take to taxi to the de-icing pads, how long it will take to de-ice, and how long it will take to taxi to the runway for take-off. This software’s use during a typical snow event will reduce airline delays by 2.6 minutes per aircraft and total costs by $88,000. This amounts to estimated savings of $5.8 million per de-ice season by improving efficiency and reducing wait times at de-ice pads.

Prior to the implementation of the Aerobahn Deicing Manager, the ramp tower would need to communicate with each airline to obtain information on de-icing progress, potentially creating longer queue times at the de-icing pads and runways. If an aircraft was not able to take off within the allotted time following de-icing, it would need to return to the pad for a second pass. This process caused lengthy delays for certain aircraft and resulted in twice the amount of de-icing fluid being applied to a single aircraft in some cases.

Today, by using multi-function pieces of equipment and making other improvements to snow management, the airport has reduced the average amount of time needed to clear a runway from 45 minutes to under 15 minutes. And, depending on a variety of conditions, the airport can sustain an arrival rate of more than 96 aircraft-per-hour in low-visibility conditions.

The continued implementation of the FAA’s cutting-edge NextGen technology is also moving the airport toward becoming the first in the world to accomplish triple-simultaneous landings using advanced approach and landing procedures. The airport also is testing runway sensors that capture the true freezing point of water and chemical mixtures on the airfield, in real time, to help make decisions about how to best deploy deicing chemicals and plows. Those and other advancements continue to put DEN on the cutting edge of snow-removal operations.

But, occasionally, even with all the advancements, training and equipment, Mother Nature reminds us she’s still ultimately in charge.

Bruce Goetz is the Director of Airside Operations at Denver International Airport and oversees the Airfield and Ramp Tower. His teams are responsible for regulatory compliance with the Federal Aviation Administration (FAA), emergency response and incident management, coordination of activities with the Air Traffic Control Tower, snow removal, de-ice queue management, gate assignments and ramp control for two concourses and the cargo facility. Prior to joining the DEN team two years ago, Bruce was the Director of Operations at Paine Field Airport in Everett Washington for 22 years. Bruce is a graduate of the University of North Dakota with a Bachelor of Business Administration in Airport Administration.  He is also an Accredited Airport Executive (A.A.E.) member of the American Association of Airport Executives (AAAE) and also served on AAAE’s Board of Examiners for 10 years.  He currently serves as a member of the Board of Directors of AAAE. 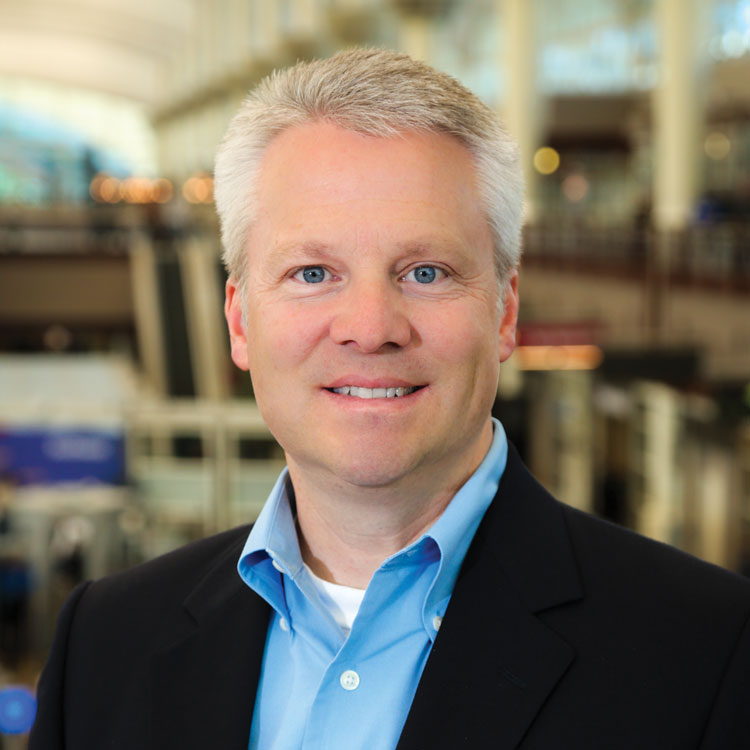