The aviation industry has seen vast changes over the past few years – enhancing efficiency whilst improving the passenger’s experience and ultimately improving the safety of air travel. However, the industry’s fire fighters still face potential hazards on a daily basis. Daniel Crick, Station Manager for the Airport Fire and Rescue Service at M.A.G. Stansted Airport, reveals how the airport deals with these threats. 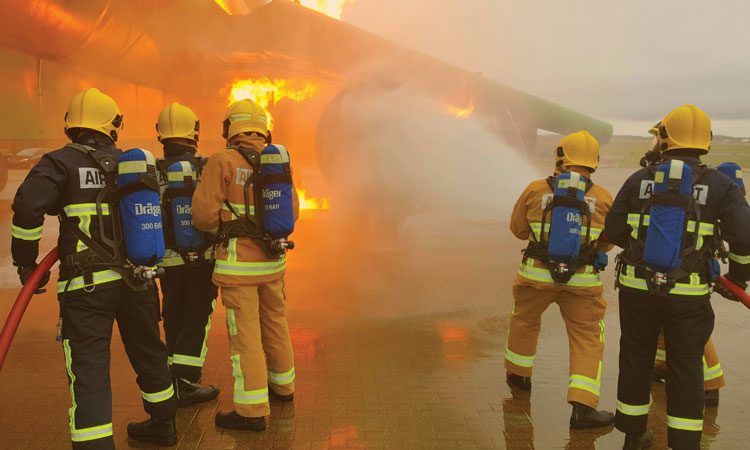 Over recent years aircraft have increasingly been built with panels constructed from man-made mineral fibres (MMMFs). MMMFs are covered in a tough resin and are very strong, can be moulded into any shape and are much lighter than their metal counterparts. This can give the aircraft the ability to become more efficient; flying a further distance on the same or less fuel than previously possible.

However MMMF aircraft panels can disintegrate into minuscule fibres when subject to a crash and fire scenario. These fibres – once burnt – have the potential to cause needle stick injuries to the fire fighter which can, in turn, lead to skin infections, traumatic dermatitis and post a major risk to the fire fighters’ respiratory system.

To assist in reducing risks from MMMFs, Stansted Airport has incorporated a number of safety measures; namely the breathing apparatus (BA) set; respiratory masks and vehicle monitor operations dealt with in the safety of the cab.

The compressed air breathing apparatus (CABA) helps fire fighters breathe clean air whilst they are in the risk area. At Stansted we use a Draeger CABA set with full face mask and a cylinder containing enough air for an average of 40 minutes work – the length of duration can vary due to the fire fighters’ fitness level, and how arduous the work is they are conducting at the time. Stansted Airport carries one BA set and two cylinders per riding position to ensure the safety of all fire fighters in the risk area.

During an aircraft emergency, after the initial fire-fighting tasks are complete and no risk of re-ignition remains, there can still be a risk from damaged MMMF panels. To prevent the MMMF fibres entering the respiratory system, fire fighters at Stansted carry the 3M full face respiratory mask for each riding position. These masks are reusable; with removable and interchangeable particle filters to prevent breathing the MMMF fibres in. The benefit of being able to use these masks over a BA set when there is no fire risk is that the weight from wearing the BA set is removed and there is no duration limit – this enables the fire fighter to be able to conduct activities easier and for longer at an incident.

At Stansted we have five Rosenbauer Panther Major Foam Tenders; two of which are High Reach Extending Turrets (HRETS). These appliances are just five years old and are well embedded into operations at Stansted. These state-of-the-art fire appliances have the ability to help the fire fighter deal with any incident easily and more importantly the two monitors can be operated via joysticks from inside the cab resulting in initial firefighting operations being conducted in a safe environment with no risks from MMMF or smoke inhalation should the wind direction change. Furthermore, there is no need for fire fighters to wear their BA set to use the monitor operations, which was a requirement with the older appliances where the operations of the monitor were from the top of the actual appliance.

The Panthers can deliver firefighting media (water/foam) at a rate of approximately 5,400l per minute. In addition to this, the appliances have cameras mounted in four locations; giving the fire fighter additional information on the incident to ensure they can see the incident clearly should their windscreen get backwash from using the monitor.

An internal fire situation can be one of the most difficult and traumatic situations a fire fighter can be faced with and comes with a high level of risk. This is due to the potential immense heat and the potential speed the fire can develop and worsen due to the enclosed nature of an aircraft cabin. The fire can quickly spread via conduction, convection and radiation, and if the aircraft has not burnt through the shell it can additionally create conditions that can lead to a flashover or backdraft. Additionally, the internal components of an aircraft include plastic trims and fabric seating, which although create a comfortable area for the occupants, will produce vast amounts of dense toxic fumes at relatively low temperatures. With the limited space inside an aircraft this can result in this space becoming filled up very quickly.

To assist the fire fighter, at Stansted Airport, we carry a BA set to enable the fire fighter to breathe in these atmospheres, enabling them to extinguish fires, search for casualties and ventilate the aircraft when it is safe to do so by opening all of the aircraft doors. As mentioned earlier, the Draeger BA set will give the fire fighter an average working duration time of 40 minutes depending on their work rate and fitness levels.

Another tool that fire fighters can use to aid them in searching for casualties is the Thermal Image Camera (TIC). These are specially developed cameras that will pick out temperatures and produce live feeds on a display screen. They enable the fire fighter to visualise energy sources in total darkness or in densely smoky atmospheres and as such can be lifesaving by speeding up the time it can take to search a compartment for casualties. At Stansted we use the Argus TIC which are hand-held, lightweight and small, resulting in being able to hang freely from the fire fighters’ BA set thus not interfering with the fire fighter’s ability to quickly remove a casualty to fresh air once located.

An aircraft suffering an emergency involving overheated undercarriage assemblies or an undercarriage fire is not totally uncommon. With these types of incidents there are two major possible risks: firstly of fire spreading from the undercarriage to the under wing rupturing a fuel tank developing into a major fire, and secondly, the risk of the undercarriage structure collapsing causing the aircraft to drop on the affected side.

Obviously there is a major risk placing Airport Fire Rescue Service personnel into this risk area, and at Stansted Airport we have looked at ways to prevent this as far as possible. The two methods we have looked to reduce this risk is by utilising our appliances and a relatively new technique of using fans.

As mentioned earlier we have a state-of-the-art Rosenbauer Panther fleet at Stansted Airport. Two of these appliance are High Reach Extending Turret appliances (HRET) these innovative appliances have the advantage over a standard appliance in that the roof monitor is completely adjustable and can be extended to 16.5m high or a reach of 7.5m. The monitor comes in three sections enabling it to reach high or down low and moveable into tight areas. On the end of the monitor the branch enables the operator to adjust the application of the media from a jet to a wide spray. Additionally, it has the ability to also produce a dry powder – a very effective means of extinguishing hard to reach areas. The last feature of the HRET roof monitor is that it has cameras mounted right at the very end of the monitor, this enables the operator in the cab to see how effective the application is, and if it is on target, one of the cameras is also a thermal image camera (TIC) which can feed back real-time temperatures from the undercarriage risk area.

So you can see this appliance is very special and can easily conduct the operations the AFRS personnel need to perform in these kinds of scenarios without the need to actually place a fire fighter in the immediate risk area.

Fortunately, whilst it is not uncommon for undercarriage issues, an aircraft will more likely suffer overheating assemblies rather than an actual fire. However, placing a cooling water jet on to the affected area will have the possible consequence of spot cooling – a danger that can cause the undercarriage to explode from cooling too quickly.

At Stansted Airport Fire Service we use PPV fans. By placing these fans on to the affected assemblies, they can cool down the area quickly – but safely with no spot cooling. Once set up and in place, fire fighters can remove themselves to a safe distance from the undercarriage until the captain on board is satisfied with the temperature readings for the undercarriage.

Daniel Crick is a Station Manager for the Airport Fire and Rescue Service at M.A.G. Stansted Airport. With over 21 years’ experience, Daniel started his career in 1996 as a fire fighter at Stansted Airport and worked up the ranks to become Station Manager in 2010. During this time he has achieved the NEBOSH General Certificate in Occupational Health & Safety, and he is a Graduate of the Institute of Fire Engineers (IFE). 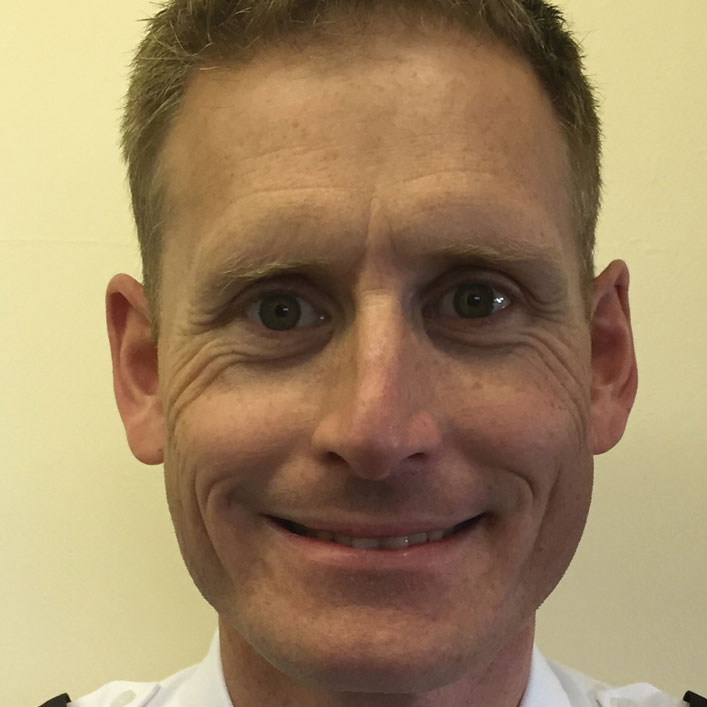