At the end of December, Jim Cherry called it a day after 15 years as CEO of Aeroports de Montreal, the organisation that operates Pierre Elliott Trudeau Airport , Montreal’s main air terminal… 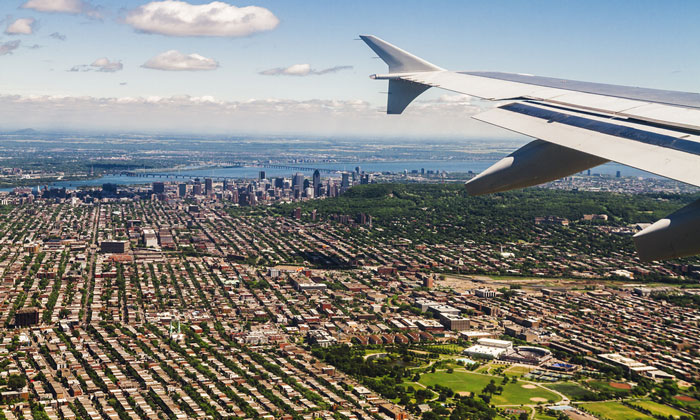 An aerial view of Montreal

Mr. Cherry recently spoke to Phil Fine about his challenges and successes during his tenure.

What was your biggest accomplishment as CEO?

Restoring the airport’s status as a hub for international flights. Of the 135 destinations we now serve, more than 75 are outside Canada. A decade ago, it was only 30. Meanwhile, we’re becoming a major hub for Air Canada. Not only does that airline now fly to Brussels and Geneva from Montreal, it serves such key North African cities as Casablanca and Algiers. And on Feb. 16, Air Canada started flying nonstop to Shanghai. All of this wouldn’t have been possible had we not rebuilt our relationships with the airport community, the city of Montreal, the province of Quebec and the government of Canada.

We did. For starters, we had to establish permanent financing. So, we met with the bankers and bond raters. We also had to convince both airlines and passengers that we were serious about improving our service. Moreover, we had to rehabilitate our physical plant, having inherited a dilapidated airport back in 2001.

What did rehabilitation involve?

Building new jetties for both trans-border and international flights for a total cost of C$625 million. We also spent C$356 million on a new international arrivals complex, C$300 million on a new trans-border departures area and hotel, C$251 million on a revamped international arrivals hall and C$73 million on new facilities at our de-icing centre. Moreover, we built a new thermal power plant, upgraded our domestic flights hall, expanded the central building and added new check-in areas for international departures. So, we now boast 60 boarding gates: 28 for domestic flights, as well as 16 each for both trans-border and international flights. Not surprisingly, our footprint is three times its original size. All told, we spent C$2.3 billion transforming a 1960s-era airport into a 21st century hub. So, if you visit us now, you’ll find a thoroughly modern, avant-garde terminal.

And one that’s much more tech-savvy.

That’s true. We’ve become a leader in adopting Wi-Fi. In fact, there are now only a few other airports, such as Vancouver, Hong Kong and Singapore, that are in our league. Other tech upgrades we’ve made include SMS messages for real-time flight information, automatic scanning of arriving baggage and the ability to make parking reservations on line. As well, we’ve equipped the customs hall with 18 automated border control kiosks, for a total of 36 terminals.

Montreal now handles more than 16 million passengers a year. Yet, that’s 24 million less than what Pearson Intl. Airport in Toronto puts through. Why?

Because Montreal has declined as a business centre, while Toronto has grown. And Toronto has done so because of fears Quebec would split from the rest of Canada. Remember, the late-‘70s and early-‘80s were a turbulent time in Quebec. Not only was a separatist government elected in 1976, but a referendum on whether the province should leave was held four years later and, again, in 1995.

By 2018, we’re hoping that 50 per cent of our revenue will come from non-aeronautical sources.

So, it’s no accident that many of Canada’s 100 biggest companies left Montreal for Toronto. Nor is it any accident that the centre of gravity for Canada’s business community moved 350 miles down the road. Toronto, you might say, has been eating our lunch. And it’s been doing so for a long time. The bottom line? It’s unlikely we’ll ever catch up to Pearson.

Still, the growth in passenger volume has been gratifying, has it not?

It has. From 2004 to ’13, for example, our passenger throughput grew by 4.6 per cent a year, topping Quebec’s own gross domestic product. International passenger volume over the same period was even higher, rising 9.9 per cent annually.  In fact, we’re now the most “international” of Canada’s big airports, with 38 per cent — 62 per cent, if you include trans-border flights — of our passengers headed to foreign destinations.

Meanwhile, the airport continues its emphasis on growing non-aeronautical revenue.

It does – so much so that by 2018, we’re hoping that 50 per cent of our revenue will come from non-aeronautical sources, such as shopping, food services and parking fees. In fact, we’re already one of the few airports in North America that gets such a big chunk of its revenue from these sources. That’s important because Aeroports de Montreal is financially independent; it gets no money from government. By focusing on non-aeronautical revenue, we’ve been able to keep our airline fees low.  All told, we’re thrilled at what we’ve been able to do over the past 15 years. We’ve built a growth-oriented organisation, one whose values are reflected in my successor, Philippe Rainville.

What’s the next step in your career?

Not managing another airport! Nor do I see myself working for an airline. I do serve on a few corporate boards, although they aren’t related to aviation. And although I don’t want to work full time, I’d be pleased to work in some corporate capacity.

For our ongoing of whether Toronto needs another airport, click here…

James Cherry is a Montréal native and graduate of McGill University.  He is a chartered accountant who has over 35 years of experience in general management, project management and financial management in the International Aerospace, Defence and Rail sectors.

Over this period he has worked in senior executive positions with Bombardier Inc., Oerlikon Aerospace Inc., CAE Inc. and ALSTOM Canada.

He joined Aéroports de Montréal as President and Chief Executive Officer in June 2001, and is a member of the Board of Directors of Aéroports de Montréal.  He is the immediate past Chairman of the Board of Airports Council International – North America (ACI-NA).  He also holds directorships in various companies and organisations, including: Canadian Airports Council, Conference Board of Canada, Logistec Corporation, COGECO and Mount-Royal Club.