Rob Adamson, Principal Architect at design consultancy, DIALOG, outlines the unique features of the terminal as well as the process of designing airports with the environment in mind… 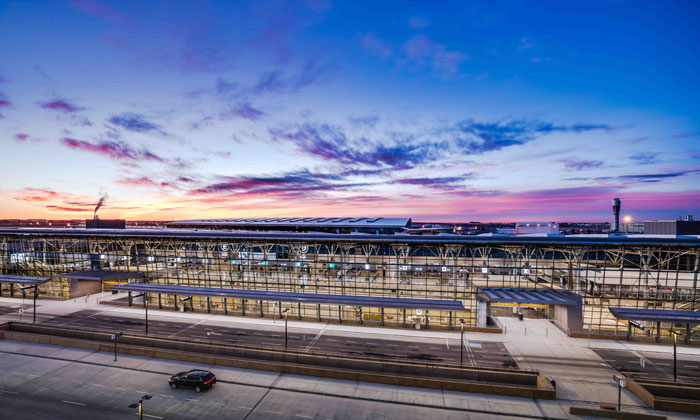 YYC is set to become Canada’s greenest and most sustainable airport.

The world’s most vibrant, progressive cities connect people to their community and environment. They are clean, efficient and strive to mitigate their environmental impact.

The same qualities of world-class cities are found in their airports, which are more than just portals to their cities but an integral reflection of them. As globalisation progresses, airports are becoming extensions of our communities and homes.

These terminals encompass the quality of life that their cities offer; it only makes sense, therefore, that airports increasingly share an imperative to incorporate sustainability and green practices in their design. YYC – Canada’s new green field international terminal which opened in October 2016 in Calgary, Alberta – is approximately two million square feet of building area, and was designed and built over an eight-year period.

The world’s most vibrant, progressive cities connect people to their community and environment…

The terminal functions as an important hub for trans-border and international travel, forming one part of the overall system of the Calgary International Airport. It has a state-of-the-art baggage handling system; is highly automated in terms of passenger processing; and operates as Canada’s first true ‘call to gate’ airport. The size and scale of YYC — and the potential environmental impacts of its carbon footprint — logically directed a sustainable design process for the project.

The result is a highly sustainable and deeply green building (almost net zero) without having had to decrease the plan size or increase the budget, by focusing on the structure’s skin and the mechanical systems working together as a total building system.

To understand how we achieved this feat, we must first recognise the difference between a ‘green’ project and a ‘sustainable project’.

A green project focuses solely on environmental stewardship, such as reducing waste, minimising carbon and water footprints, preventing pollution, and conserving natural resources. A sustainable project moves beyond this and not only includes green components, but also integrates those of economic growth, such as the use of local contractors and supplies; creating and strengthening markets such as alternative fuels and solar and wind power technologies; and social responsibility such as implementing fair labour practices, designing for quality work and service environment, and educating the public and surrounding communities.

The implementation of ‘airport sustainable design’ initiatives is certainly important to effectively respond to the realities of today’s business environment. However, it is equally important to ensure that any sustainable design strategy applied has the ability to sustain performance on a number of fronts. A truly holistic approach for sustainability — and one that will serve as a benchmark for environmental stewardship — is one that leverages the synergies that exist in multiple performance areas. These include environmental, economic, operational and service performance.

At YYC a series of sustainability workshops were undertaken to assist the design team in shaping the design of the project.

One of the outcomes of these workshops was the decision to establish a Sustainability Framework for the Calgary Airport Authority that could be applied to the project to evaluate the viability of green design features being considered for inclusion.

The final product included important design techniques such as the following:

The terminal functions as an important hub for trans-border and international travel, forming one part of the overall system of the Calgary International Airport…

The main advantage is that it makes use of the earth as a natural ‘free’ heating/cooling source, reducing conventional heating and cooling costs. Geothermal also has a high coefficient of performance (COP) of around 3 or 4, meaning that for every unit of energy in, it is possible to get three or four times that amount out. YYC has the largest geothermal well system in Western Canada with almost 600 wells that extend over 400 feet into the earth and lie completely underneath the footprint of the building.

The YYC Terminal has a super high performance building envelope that uses a double wall façade to wrap the building in a thermal blanket where it is most needed on the south and west façades, while the remaining north and east façades use more conventional highly insulated metal panels and, where view capture is required, triple glazed curtain wall systems.

The design of the façade maintains a 40% to 60% window to wall ratio capturing views of the city skyline and Rocky Mountains in hold rooms and having highly insulated solid walls where view capture is not necessary. The wall system has a series of frit patterns at high levels that help to control the heat gain of incoming solar radiation, as well as unwanted glare that can cause visual discomfort to people in these spaces. The wall system also contains an automated blind and louvre system that tracks with the sun, opening and closing as required to help control heat gain and reflect natural light deep within the space as a light harvesting strategy.

Rainwater harvesting is an application that is encouraged by environmentalists worldwide. In the case of the Calgary International Airport, rainwater is collected from the roof and piped into a storage tank for later usage. The water goes through a comprehensive cleaning process and can be used for irrigation, vehicle washes and as a water source for water closets and urinals.

The distribution of fresh air is delivered at low velocity only to occupied zones of the building through floor mounted diffusers, often using fixed building elements such as baggage claim devices, check in counters, fixed walls or advertising pylons as the vehicles through which the air is delivered. This strategy minimises the volume of air required to ventilate the spaces; reduces fan sizes needed to distribute the air; and, as a result, decreases the energy consumption required to ventilate the building.

As is the case in many airports, YYC has a series of high volume spaces where delivery of fresh air and cooling is not required because these spaces are largely unoccupied and purely for architectural effect. In essence we have a stratification of air temperature in the building with the spaces where people are being fully conditioned for thermal comfort, and other areas that are not occupied, not treated to the same degree.

The outcome of the design and construction efforts at YYC is a targeted LEED Gold terminal building containing many sustainable design features. YYC leverages the synergies that exist in multiple performance areas – such as environmental, economic, operational and service performance. YYC provides a high quality service environment for individuals and the community at large; minimises waste and conserves resources through effective management; provides a positive return on investment in a reasonable time frame; and improves workforce effectiveness and operational outcomes.

Rob Adamson is a Principal Architect at DIALOG and an airport planning expert. He has led the planning, programming, and design effort at the Calgary International Airport since 1998. As an active member of ACI and AAAE, he is passionate about how airport design can meaningfully improve the wellbeing of communities and the environment we all share.