In April 2014, Nice Côte d’Azur will become the first airport in continental Europe to screen all checked baggage through Standard 3. Marc Terraillon, Head of Security and Safety, provides an overview of the implementation. 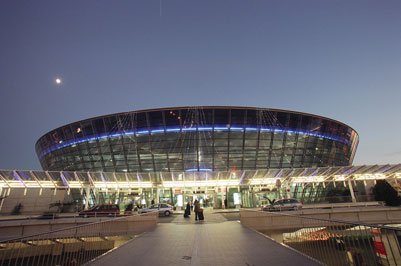 With security threats becoming increasingly sophisticated and checked baggage constantly under scrutiny, the airport and aviation industry has resulted in the establishment of a regulatory framework for aviation and airport security that overlays provision at European, international and national levels.

In the United States, the Transportation Security Administration already screens 100 per cent of checked baggage in commercial aircraft, and in compliance with the 9/11 Act, all cargo transported on a passenger aircraft has been screened for explosives as of 1 August 2010.

‘Standard 3’ is an ECAC-operated framework that regulates and certifies the minimum required levels of detection in accordance with the EU Regulation 1087/2011 and establishes the detailed measure to be applied regarding basic common standards for air transport security, specifically relating to the detection of explosives. The regulation indicates that ‘Standard 3 must be applied to all EDS installed as of 1 September 2014’. In response to this, many airports in the EU are moving forward with the purchasing of EU Standard 3 EDS ahead of the September 2014 deadline.

Nestled on the French Riviera, Nice Côte d’Azur Airport carries 11.5 million commercial passengers annually and serves 103 destinations via 53 airlines. Earlier this year, the airport became the first in continental Europe to screen all passenger checked baggage through Standard 3. “In 2011/12, an internal baggage sort replacement study highlighted the necessity to revise our security philosophy in order to adapt to the new European standards regarding the screening of hold baggage,” explains Marc Terraillon, Head of Security and Safety at Nice Côte d’Azur. “The decision was made to switch to Standard 3 effective April 2014 to guarantee the highest security standards and provide a response to approaching European regulatory obligations.

“This was perfectly aligned with our desire to adapt to European standards of premium quality services for passengers.”

To meet the goal, the airport worked with security solutions providers to deploy advanced EDS that gave them the capability to screen all checked baggage more accurately and efficiently, while providing the throughput capacity needed to meet growing airport traffic.

Nice Côte d’Azur has three terminals, each housing one baggage system along with three centralised screening stations for passengers and technology for the detection of liquid explosives; three road access security checkpoints for goods and vehicle inspection; and one biometric access control system.

“The new facilities in Terminal 1 have increased explosive detection capabilities and throughput capacity,” says Marc. “Thanks to the four EDS that work in parallel, we are able to optimise our maintenance programmes to avoid machine wear and ensure maximum system uptime and performance.” These efficiency savings have resulted in operational and security gains. The EDS, coupled with the cart conveyor technology in use, also allows improved energy control and greater baggage traceability.

Marc explains how today’s technology allows a maximum amount of screening with a minimum number of manual baggage inspections, but appreciates that the industry must wait for a longer implementation period to assess the true benefits in terms of passenger comfort.

Security within the airport industry is constantly-evolving. “There has been, and continues to be, significant technological progress through the emergence of imaging, detection and decision aid tools such as embedded intelligence, via Standard 3 EDS,” reveals Marc. Since 2012, three terminals at Nice Côte d’Azur have been equipped with Standard 2 and 3 EDS following an investment programme of several millions of euros. Since then, the airport has consistently developed its screening checked baggage inspection system to guarantee a security level that meets the highest global standards.

There is no doubt that technology is helping airport security to advance further than ever before, as Marc explains: “The future lies in the transfer and sharing of data for improved anticipation and targeting of risks and better image processing in real-time to alleviate doubt via centralised screening inspection stations and multiplexed imagery, for example. The passenger data and imagery combination will further optimise detection for improved targeting of threats.”

In today’s passenger-orientated world, airport security is fraught with challenges, the main one residing in the growing number of regulatory standards to the detriment of a pragmatic risk analysis. “Today, one must be capable of processing a passenger with minimum constraints. This means we must be as clear as possible in order to enable passengers to understand what security requires,” says Marc. “Accordingly, inspection must be the least traumatic possible and personal intimacy must be respected. For example, the results of a quality survey we conducted at Nice Côte d’Azur revealed that pat-downs were the least appreciated form of inspection.”