International Airport Review spoke with Gloria Bouillon, Airport Manager of Beverly Regional Airport, about how the airport achieved 30 per cent growth in just one year during the COVID-19 pandemic. 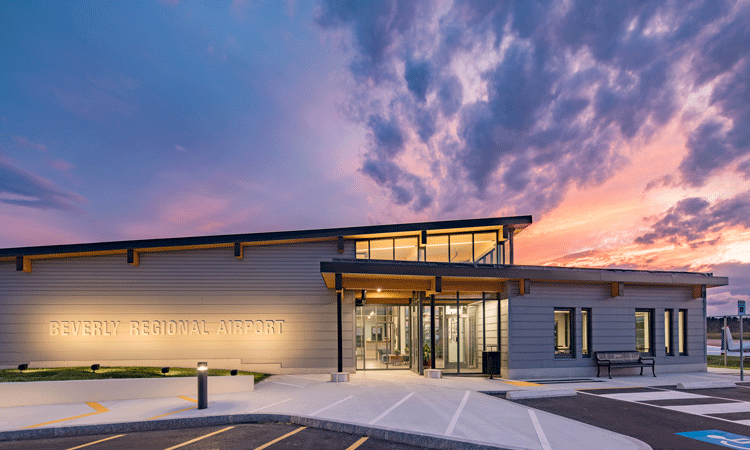 Aviators know a thing or two about clouds, but they are not alone in knowing that even the darkest clouds can have silver linings. However, Beverly Regional Airport (BVY) has a “silver linings story” that has and continues to come about amid the global COVID-19 cloud.

In a matter of three years, Beverly Regional Airport went from number nine in the state of Massachusetts to an impressive number two and the second busiest general aviation airport in Massachusetts.

Many businesses came face-to-face with contraction during the pandemic, and shrinkage was in the works at Beverly Regional Airport based upon a decades old Master Plan that was still in the planning process prior to the arrival of new Airport Manager, Gloria Bouillon, in 2018. Bouillon quickly recognised that the outdated forecast was no longer reflective of the airport’s operations and fleet mix, or its potential. The last Master Plan Update had been conducted during the Economic Recession of 2008. The primary runway’s planned demolition in width was part of the Capital Improvement Plan and was antithetical to BVY’s ability to maximise its operations, supported by a new fleet mix and larger corporate operators.

“Leaders need to challenge traditional thinking and be innovative and look to optimise strengths,” said Bouillon. “The airport needed new eyes on it. Remaining the status quo would have allowed the corporate uses to vacate their lease holds, jobs and tax revenues would have been lost and it would have been truly devastating to the region and Boston Metro Area. This vision for growth started before COVID-19, so when COVID-19 hit the aviation industry, not only did this allow Beverly Regional to increase its growth and operations, it increased employment in the region, and brought additional services and businesses to the airport.”

Timing is important, and Bouillon’s arrival on the scene was timed perfectly for a course correction. She swiftly worked to demonstrate to the Federal Aviation Administration and Department of Transportation, Aeronautics Division, the need to conduct a Master Plan with an updated forecast. Now, the airport is working towards its largest project in its history, a massive development project that will expand the runway’s length an additional 600 feet, as opposed to the existing plan to contract the runway.

Nobody knew then that the COVID-19 cloud would soon descend upon Massachusetts, and the rest of the world, but the completion of this project put BVY in position to not only withstand the COVID-19 onslaught, but to experience impressive growth despite the pandemic.

Together, these things have allowed for growth of close to 30 per cent for Beverly Regional Airport throughout the pandemic, and the infrastructure expansion set in motion has been the backbone of that almost unheard-of growth, via diversification of airport revenues, as well as significant growth in demand.

“Since we are confined with our aeronautical land, we had to be creative with our infrastructure development, to maximise aeronautical use and minimise community impact. We were able to do this, with the planned expansion of our primary runway, and configure our development planning beyond just the short-term projects. This is going to set the stage for the airport for the next 20 years and beyond.”

“I think in the past there was a perception of what this airport was and where it was going and there was no appeal for the corporate user or businesses with the contraction and limited services,” Bouillon said.

Finally, Bouillon conducted presentations, advertising the businesses, increased the airport’s marketing and advertising, created social media platforms, and overhauled its website to detail the airport’s upcoming changes. This resulted in a surge of activity for the airport.

“Once companies and businesses realised my vision and this growth of opportunities, they really wanted to be part of this exciting future,” continued Bouillon. “And from there things just absolutely took off for us. Suddenly there was so much visibility on the airport, and it became a place where people want to do business. We’ve completely changed the way we do business. Companies suddenly wanted to relocate here and bring in their businesses. It opened up so much opportunity for the airport.”

The Beverly Regional Airport of today is a vastly different place that it was a few short years ago. Today, we are a dynamic aviation hub that has brought tremendous economic value to the entire North Shore.

Situated just 14 miles from Boston’s Logan Airport, Beverly Regional has already established itself as an easier, more convenient alternative and invaluable resource for the many business travellers travelling to and from the many surrounding industrial parks.

Non-aeronautical land use is a focus for Bouillon. Previous practices had been to sell off parcels to fund capital projects. Bouillon has a background in infrastructure development and brought that experience to look at an alternative use for vacant land off the airport property. Bouillon said: “I started to cold call developers and discuss all the reasons they needed to be a part of this growth story and to have a location that can reach the global economies. The parcel offers tons of curbside frontage with utilities that are already in place in built-in safety and high security environment with established police and FEMA presence. Within the three years that Bouillon has managed the airport, the value of the non-aeronautical land increased in value by 1,300 per cent. Companies evaluating the site desire proximity to Boston, and include healthcare industries, biotech, life sciences and innovation/technology hub. This project of commercial development is a tremendously exciting prospect for potential developers.

The ultimate vision is to continue to transform Beverly Regional Airport into a transportation and business hub that is an economic engine for the area.

Commuter service is in demand and Beverly Regional Airport is preparing to provide it for its passengers. “It will be an important part of our expansion plans and fulfil the desires of our customers. We pride ourselves on discovering and meeting the needs of both our consumer and business clientele,” said Bouillon. “The goal is that we continue to benefit the community’s values, goals and be “A Good Neighbour” in every aspect. We needed a new identity. We became a branded name.”

Finally, and perhaps most importantly along with the vision for the future, the cornerstone of the brand remains the same: the relentless commitment to the highest levels of customer service.

The Beverly customer experience is unique in that it is stress and hassle-free, with a New England backdrop.

Bouillon concluded: “We will no longer be an airport anymore. We will be so much more. We will be a mobility hub, with global connectivity and that is something that will transform lives.”

Gloria Bouillon is the Airport Manager for Beverly Regional Airport. She has transformed the airport during its largest project in its history. She builds consensus with a visionary approach and effective communication to stakeholders and community. Previously, as an Aviation Planner, she developed airport master plans, facility layout requirements, capital improvement plans, environmental assessments, and state-wide economic impact system studies for airports.

This past year, she was awarded “Top Women in Aviation and Aerospace to Follow on LinkedIn.” She has become a recognised speaker at conferences and events both nationally and internationally speaking on topics of broad range in the aerospace industry. She serves on the Board of Directors for the North Shore Chamber of Commerce and Massachusetts Airport Managers Association, as well as a State Representative for Massachusetts for NEC AAAE. She also serves as the Community Advisory Committee for MassPort Authority and Environmental and Health subcommittee and participates in various economic development committees. She is passionate about the aviation industry and highly involved in monitoring young professionals and women in aviation. She is a commercial, instrument rated Pilot with a Bachelor of Science in Aviation Management from Dowling College, School of Aviation and an Associates Degree in Aviation Science, Professional Pilot.