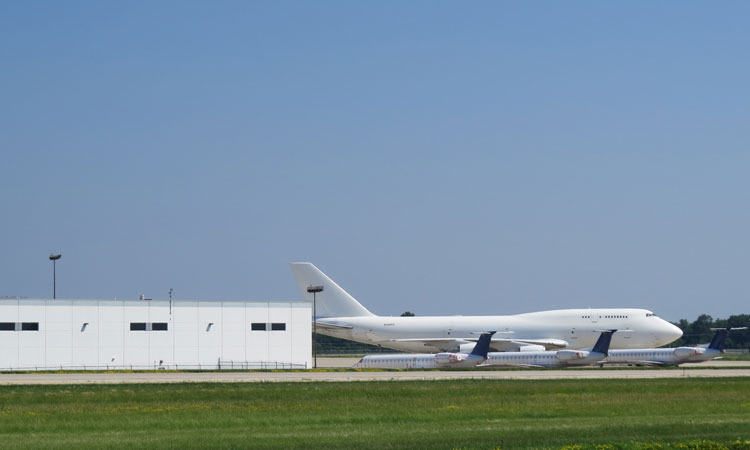 The COVID-19 pandemic changed life for Americans in countless ways, from virtual meetings and telemedicine to online museum tours and e-learning.

Perhaps one of the biggest changes, however, has been in the consumer marketplace. Demand for online shopping peaked when much of the country shut down and has continued to gain steam. Now, the convenience and ease of e-commerce has given this sector a firm foothold that is unlikely to come undone.

Subsequently, the cargo freight industry is bustling as never before – and demand isn’t expected to wane any time soon.

How a smaller airport leveraged and built new cargo opportunities

Chicago Rockford International Airport (RFD) is a classic case study of the success that can happen when a regional airport brings together the right location, a forward-looking vision and a whole lot of sweat equity into building its cargo service line. Today, RFD handles up to 36 UPS flights daily and is Amazon’s top five busiest air hub in the United States. It now regularly moves the kind of cargo weight through its facility that previously only happened during the holiday season. The opportunity for business growth came with the onset of the pandemic, and RFD was there to meet it.

For RFD, the birth of cargo infrastructure came well before the 2020 pandemic. It dates back even before the advent of internet commerce, when Wisconsin-based Lands’ End struck a deal with UPS in the early 1990s. That brought frequent and steady cargo freight through the airport, paving the way for RFD to eventually become the second-largest UPS hub in North America.

Focus on growing the cargo side of RFD’s business persisted, leveraging internet commerce growth during the past decade. Airport executives made a name for themselves – and for RFD – in the supply chain industry. The RFD team invested specifically in areas that would boost the cargo market, such as a $17 million ramp expansion, Amazon facility expansion at RFD, and a new $50 million International Cargo Facility. RFD was among the first airports in the country to establish itself as an Amazon Air gateway, when the e-commerce giant first launched its own flights in 2016. By 2019, RFD had been named by Airports Council International (ACI World) as the fastest-growing cargo airport in the world, among those handling at least 250 metric tons of freight annually.

As one of the top 20 cargo airports in the country, RFD was ready for the pandemic-induced online shopping surge. For the first quarter of 2020 alone, RFD experienced a 30 per cent year-over-year increase in landed weight.

Carriers that were not already utilising RFD began to see the benefits that airport leaders had been preaching all along: it has the flexibility and ease of use that makes it a cost- and time-efficient alternative to larger hub airports. Indeed, a successful cargo operation can’t be sustained in just any location. RFD has a few of the precise variables that make it work – location being top among them.

Just 72 miles from one of the world’s largest airports, RFD is the perfect spot for freight companies looking to avoid the congestion of larger metropolitan areas. A typical large hub airport has vectored approaches, considerable ground holding and long taxi times. Small to mid-sized airports like RFD lower the wait time for both airplanes and truckers, allowing them to get materials to distribution centres faster.

Additionally, compared to a major metro airport that might be landlocked, RFD has ample room for additional growth needs such as warehousing, storage, or trucking centres. RFD is building a 190,000 square foot International Cargo Facility to be used by freight forwarders and air cargo airlines that require such modern airside cargo handling operations.

Just minutes from multiple state and federal highways, RFD has the ability for freight to literally hit the ground running. It is centrally located to be on the interstate in mere moments, taking cargo to markets throughout North America.

Smaller airports can – and should – position their cargo capabilities for growth

Beyond location, successful cargo airports have a steady stream of users at hand – shipping companies, warehouses, distributors and trucking firms. They’ll need an advantage to switch from their current freight methods, so airports entering the market need a competitive edge.

An available workforce is also among the must-haves for launching or growing a cargo operation. RFD has a long history of supporting ongoing training for both cargo handlers and aviation mechanics.

There’s little doubt that domestic cargo operations in Rockford have continued to grow because of aggressive planning and networking during the past decade. Without this same aggressiveness and vision the airport would not be seeing movement in its most rapidly growing sector: international shipping.

Representing up to 15-20 per cent of the total cargo business at RFD, international freight has grown immensely since the pandemic. Without the efforts put in during the past 10 years, the airport wouldn’t have been in the position to adapt to those business requests. Cargo freight has always been a priority industry at RFD. It wasn’t a matter of ‘if’ RFD attracted international freight, but ‘when’.

Having a facility and the infrastructure that allows aircraft to land and take off is one thing. The difficulty comes from everything that happens once that plane comes to a stop. Airport operators need to be experts in helping airlines and freight forwarders move their product efficiently on the ground. Airports need to be more accommodating and flexible when it comes to coordination, trucking, warehouse availability and local material handlers. No longer is the airport simply a ‘fly-and-land’ operation. It’s involved in moving, storage, distribution and goods management.

There’s no doubt: COVID-19 has stressed the cargo market, and that gives smaller, regional airports the opportunity to prove their importance. Building a successful cargo system takes time, vision and purpose. The pandemic makes forecasting business models difficult, but it’s still as important as ever to stay a step ahead of the customer base. Anticipate changes, both positive and negative, before they arrive. Understand that you’re working with a moving target now, and that airports around the world are facing these challenges as well.

Times like these present an opportunity for regional airports that want to become players in the cargo arena. With the right location, infrastructure, and vision, smaller airports have the unique ability to become major players in the air cargo and logistics world.

As Executive Director for the Chicago Rockford International Airport (RFD), Mike Dunn is responsible for securing opportunities for the growth of the airport through additional cargo and passenger business as well as work with government officials to secure grants and additional support and advocacy.

Mike was named to his role in 2012 and since that time, RFD has become the biggest economic engine in the region. Previous to his role as ED, Dunn was on the Airport’s Board of Directors where he was a tireless advocate for the organisation’s growth and enhancement.