Arne Kirchhoff, Senior Vice President of Aviation and Accountable Manager at Stuttgart Airport, explains how the airport’s innovative approach to A-CDM is at the heart of its sustainability goals. 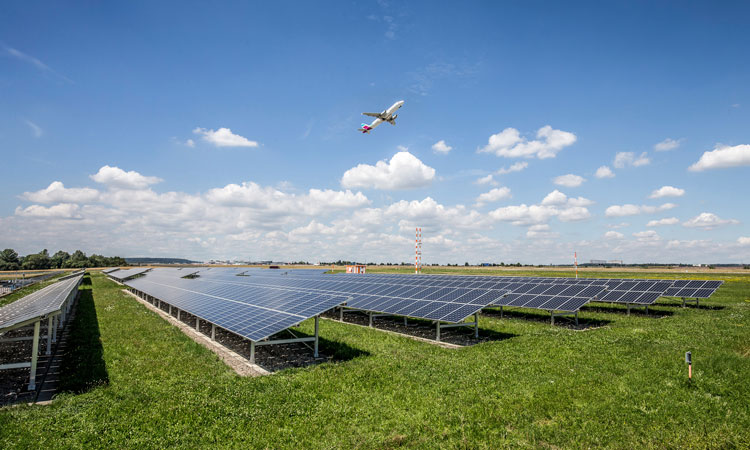 Stuttgart Airport (STR) has long been recognised as one of the most committed and progressive airports when it comes to sustainability. In 2013, the airport bundled all of its sustainability activities into its ‘fairport STR strategy’. This strategy, along with the master plan completed in 2020, outlines all climate actions to be implemented at Stuttgart Airport through to 2050.

The airport has established 2050 as the year when its operations are to be entirely carbon-neutral. The plan and goal are fairly ambitious; however, the airport has already made major strides towards achieving that objective. It has already reduced its carbon emissions by 42 per cent through both efficiency initiatives and carbon reduction projects on its compound. Scientists project that Stuttgart can reduce 90 per cent of its emissions on its own through various measures. One example of a solution implemented which is enabling Stuttgart to further reduce its environment footprint is an Airport Collaborative Decision Making (A-CDM) solution provided by INFORM GmbH (Aachen, Germany), a leading global provider of intelligent optimisation solutions for airports, airlines, and ground handlers. A closer look at how Stuttgart’s A-CDM solution is advancing its sustainability mission will give other airports insight into ways they too can apply technology to help preserve the environment.

Through the development of its master plan and fairport STR climate strategy, Stuttgart has developed a scientifically sound plan to address its CO2 emissions. In 2017, the airport assigned itself an extremely demanding task: to run the airport entirely carbon-neutral by 2050 at the latest. As part of its plan, it set its first milestone goal to reduce its 1990 greenhouse gas emissions figure by 50 per cent by 2030. Having already reduced these emissions by 42 per cent in 2020, the airport has already made significant progress through various steps. These include an expansion of its electric fleet, producing more solar power and developing a smart grid.

With an emphasis on making ground handling more efficient and sustainable, the airport runs an all-electric and emission-free fleet of passenger buses and baggage tugs on the ramp. This saves an estimated 280,000 litres of diesel fuel annually: approximately 700 tons of CO2 emissions from its handling operations. Currently, an estimated 40 per cent of its Ground Support Equipment (GSE) fleet is electric and considered to be one of the major drivers of the airport’s climate-neutrality. To support the electric fleet, both airside and landside infrastructure has been provided such as ample charging stations including fast charge stations provided for passengers’ and visitors’ electric cars.

Other examples of Stuttgart Airport’s sustainability measures include its 100 per cent purchase of electricity renewable sources, operation of solar power plants with a total of 15,000m². To meet its goals, the airport plans to increase its solar energy production tenfold by 2050 – from approximately 3GWh to 30GWh. In other examples of its sustainable aviation industry leadership, in 2019, Stuttgart Airport became the first German airport to offer free landing charges to electric aircraft and to fund electricity-based fuels, and it was also one of the first airports in the world to have a runway completely illuminated by LED lighting, which reduced energy consumption by an estimated 50 per cent.

The INFORM A-CDM solution supports the turnaround process by receiving and sharing all relevant data and information via different interfaces, steering the respective data workflows, and triggering alerts and notifications. The common situational awareness gained by sharing all prevailing information and the improved prediction of aircraft handling, start-up and departure times leads to optimised and more sustainable use of resources.

At Stuttgart, pre-departure sequencing of all departing flights has been granting an optimised start-up and off-block sequence, which has resulted in reduced aircraft taxi times or at minimum, kept taxi times level even though the number of flights at Stuttgart Airport had increased substantially in recent years until the beginning of the pandemic in 2020. Similarly, over the last several years, the TTOT provided to the NMOC has deviated from the Actual Take-off Time (ATOT) on average only a maximum of 1.5 minutes over the ATOT. Applying A-CDM, the airport can more efficiently keep aircraft on their stands, rather than waiting with running engines at the runways burning fuel.

In addition to optimising the local turnaround process, INFORM’s GroundStar Planning Staff & Equipment (GS Planning) and GS RealTime Staff & Equipment (GS RealTime) components of Stuttgart’s A-CDM solution helped the airport optimise demand coverage by shifts. Not only does it support the airport’s high quality, productive operations, but it also helps accommodate staff’s scheduling preferences. By defining shift sets and rules which include those shifts preferred by employees and exclude less desired shifts (e.g. 10 hour shifts and/or mid-day shifts), Stuttgart can include work schedule preferences in its demand planning. Stuttgart Airport is also applying INFORM’s GS WorkforcePlus as part of its broader A-CDM solution. Used in combination with GS Planning, the airport can allocate shift demands calculated in the planning system in accordance with staff general preferences or specific shift requests. By tailoring rosters to staff individual needs, the solution contributes both to staff well-being and increased loyalty to the airport, while balancing these goals with airport’s operational interests.

From ground handling to passenger services

Stuttgart is also applying the INFORM GroundStar solutions in the operational planning and steering of its subsidiary, SAG Stuttgart Airport Ground Handling’s services. These range from aircraft loading/unloading and aircraft de-icing to passengers with reduced mobility (PRM) services. Additionally, the airport is applying the planning and workforce management system in other operational departments of the airport operating company, Flughafen Stuttgart GmbH, through which shift work also is conducted.

In addition to the aforementioned process optimisation and sustainability benefits Stuttgart Airport has derived from its A-CDM solution, the airport has been able to minimise unnecessary paperwork by providing digital information to ground handling staff in real-time operations. The airport also has been replacing printed staff rosters by applying the GS WorkforcePlus Employee Portal as a digital alternative further advancing its ecological goals.

Data supports the impact of A-CDM

In its A-CDM Impact Assessment Final Report, Eurocontrol published the results of its study of 18 CDM airports to determine the credible operational benefits derived from A-CDM. It found that A-CDM supports strong taxi-out time and take-off predictability, air traffic flow management (ATFM) and ATFM slot adherence, more favourable slots for its airline customers and their significant ground delay savings, improved ground handling resource utilisation, and improved management of, and recovery from, periods of adverse conditions. It reported a dramatic improvement of take-off time predictability, typically by as much as 85 per cent, during adverse conditions. From these findings and others pointing to the positive impact of A-CDM, Eurocontrol noted improvements based on taxi-out and ATFM delay improvements derived by the participating airports. At Stuttgart Airport specifically and based on 56,000 departures in 2016, there was a reduction of 741,200kg of CO2 and 200kg of SO2, and 235,000kg of fuel burn.

Along with its own environmental goals, Stuttgart Airport is assuming responsibility by accelerating the transformation towards climate-friendly aviation. The airport’s goal is to expedite the development and market penetration of future technology that supports sustainable aviation such as the use of sustainable aviation fuel (SAF) and new, alternative aircraft engines. The airport has set innovation incentives through its airport charges, removing landing fees entirely for the first electric planes for the first one-year period. It is working closely with scientists and aircraft manufacturers to advance new technologies to support a greener aviation industry. It is making investments such as financially funding the development of the world’s first four-seat hydrogen fuel cell aircraft, Hy4, which had its world premiere in 2016 over Stuttgart Airport where it is currently based.

Applying an A-CDM solution and implementing other environmentally-sound measures, Stuttgart Airport is staying the course of its sustainability mission, and step-by-step implementing its comprehensive sustainability plan. It is also demonstrating strong industry leadership both through its actions and investments in greener, more sustainable aviation.

Arne Kirchhoff is the Senior Vice President of Aviation and Accountable Manager at Stuttgart Airport. Kirchhoff, who has been in this role since 2019, previously worked for over 20 years with Lufthansa German Airlines and held various management positions in Frankfurt, Dresden, Nuremberg and Leipzig. From 2011 until 2019, he was with Condor/Thomas Cook Airlines as Group Director Commercial Airport Relations & Ground Handline Procurement. 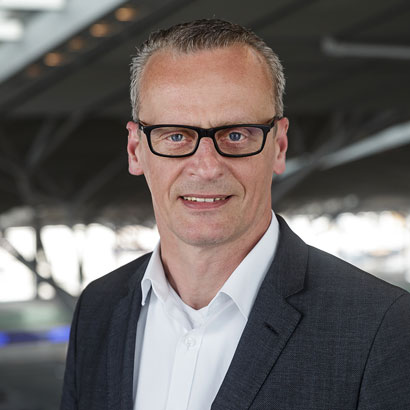