Paul Coughlan, Project Director, said Brisbane’s new runway is the biggest and most satisfying project he has ever been involved in. 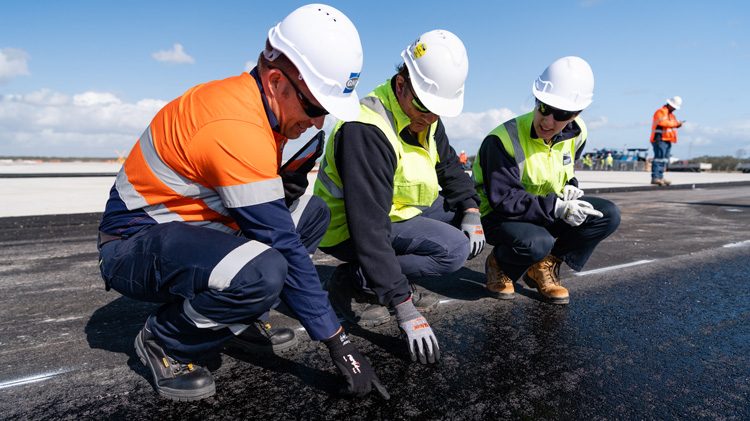 The construction of Brisbane’s new runway has reached a critical milestone, with the application of asphalt – the final layer of the runway’s pavement.

Over the next three months, more than 100,000 tonnes of aircraft-grade asphalt will be placed on top of the runway’s 2.5m of compacted sand and 600mm layer of fine crushed rock.

Fulton Hogan has been subcontracted by Skyway to produce a specially-designed asphalt on site that allows flexibility, load-spreading capacity, deformation resistance and the ability to withstand aircraft-induced shear stresses and high temperatures.

Paul Coughlan, Project Director, said: “After nearly 15 years as Project Director, I am just as passionate now as I was when I started thanks to moments like this. Asphalt is the final layer of Brisbane’s new runway – the icing on the cake that is an internationally tried-and-tested runway pavement design. Given that site preparation and reclamation works for the new runway commenced way back in July 2012, it is incredibly exciting to be reaching a point where the end of construction is now in sight.”

Graeme Fenemore, Skyway Joint Venture Project Director, said the milestone is representative of the significant progress made to date which has been the culmination of an open and collaborative relationship between Skyway and BAC.

Fenemore said: “Together we have implemented innovative engineering solutions while always putting the safety of our workforce first, proudly recording in excess of 2.2 million hours with an outstanding safety record. By continuing the momentum we have, I am confident the project will be delivered safely to the satisfaction of the wider community.”

Skyway, a joint venture (JV) between BMD Constructions Pty Ltd and CPB Contractors Pty Ltd, was awarded the airfield works contract in July 2017, and with around 12 months of construction to go, they have:

Following the completion of the construction programme, the detailed commissioning process for the new ground lighting, navigational aids and control tower systems will commence.

Brisbane’s new runway remains on track to be operational in mid-2020.