Over 140,000 tonnes – the equivalent weight of 66 London Eyes – of Christmas cargo expected to pass through Heathrow, the UK’s biggest port by value during the holiday season. 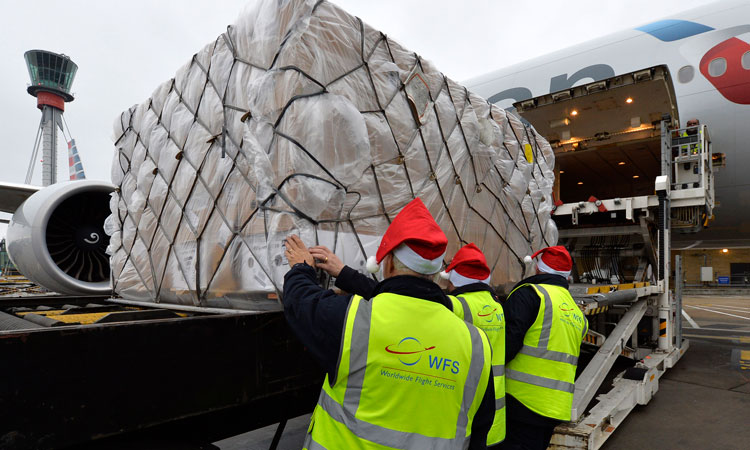 Data from Heathrow reveals the role the UK’s only hub airport and biggest port by value plays in transporting essential ingredients for Christmas celebrations across the world. Based on historical trends, over 140,000 tonnes of Christmas cargo is expected to pass in and out of Heathrow in the weeks preceding and following the holiday season (from November to December, according to 2017 data).

The airport’s analysis of Seabury cargo data over November and December 2017 reveals a clear spike in the export of certain Christmas essentials ahead of the holidays, including:

The same data shows over £112,000 worth of rose bushes, over £97,000 of cigars travelled through Heathrow at the same time. The figures also reveal a spike in the number of Christmas trees, snowploughs and snowblowers in Heathrow’s cargo in the run up to the festive season.

Fresh salmon is undisputedly the most popular export by weight – with almost five million kilograms (4,619,042 kg) being transported through Heathrow in November to December 2017 to destinations all around the world. The airport’s cargo data shows over a quarter of Heathrow’s total exports travelled to Christmas customers in the US (26 per cent), with China following next (11 per cent).

Heathrow’s latest Trade Tracker, compiled by the Centre for Economics and Business Research, reveals the total value of trade through Heathrow up to September of this year equalled  £108.5 billion – 29 per cent of total UK trade.  Over the course of 2018, Heathrow’s non-EU exports have been increasing in value to total nearly £5 billion per month – most of which (around 95 per cent) is transported via the belly hold of passenger planes. The report’s analysis of data between July and September shows the value of Heathrow exports to the US and China alone (£5.84 billion) was more than triple the value of exports to the EU (£1.898 billion) highlighting the increasingly important role Heathrow could play when the UK leaves the EU.

For the second year running, Heathrow is celebrating the vast array of UK companies that choose to export via the airport with its “12 Exporters of Christmas” social media campaign.  The campaign features the success stories of SMEs like West London’s Pearson Bikes and Cornwall’s Tregothnan Tea and how these companies work with Heathrow – especially around Christmas time – to get their products quickly and safely across the world.

Nick Platts, Head of Cargo at Heathrow Airport said: “Many of our passengers don’t realise the amount of cargo that is under their feet when they fly nor the essential role Heathrow plays in getting not only people to Christmas festivities across the world, but also the key ingredients for those celebrations. We are very proud to be making a big contribution to spreading British Christmas cheer around the globe again this year.”