Sikkim’s first airport at Pakyong is open for business

The Indian state of Sikkim has opened the doors to its first airport, Pakyong Airport, inaugurated by Narendra Modi at Pakyong on the 24th September 2018. 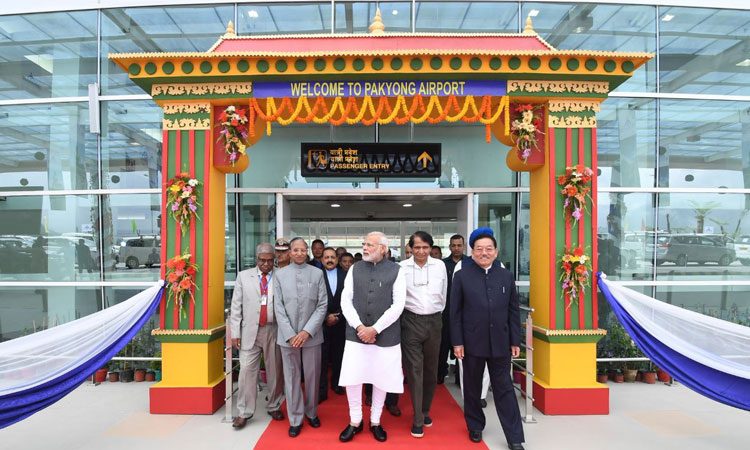 Airports Authority of India (AAI), under the backing of Ministry of Civil Aviation is committed to providing air connectivity and developing and upgrading the airport infrastructure across the country. Due to the proactive measures being undertaken by the government, India is already one of the fastest growing civil aviation markets in the world and is gearing up to become the world’s third largest civil aviation market.

Narendra Modi, India’s prime minister, during a speech at Pakyong’s opening ceremony said: “After the opening of the airport there are now 100 operational airports in India.”

The new airport at Pakyong has been developed by the Airports Authority of India at an estimated cost of US$68.7 million. Spread across more than 202 acres of land, the area of terminal Building of the airport is 3200m2 with a peak hour handling capacity of 100 passengers.

Clicked these pictures on the way to Sikkim. Enchanting and incredible! #IncredibleIndia pic.twitter.com/OWKcc93Sb1

The Airport has been developed to handle ATR 72-500 type aircraft operations.

It is the first ever Greenfield airport in Northeast India which will be one of India’s five highest-altitude airports, located at a height of 1,399 metres or 4,590 feet. Difficult topography and hostile weather conditions made this project extremely challenging and exciting, according to AAI.

An extensive use of Geo-grid soil reinforcement and slope stabilisation was used to maximise the development area.

The reinforcement wall on the project is one of the tallest reinforcement walls in the world. With a 550 metre wide and 1.7 km long corridor in which the runway and airport buildings are constructed, the Terminal Building has five check-in counters and one arrival carousel.

The building has been perceived as a single spacious volume, through which passengers can easily flow from the road to the aircraft. The building interior emanates a sense of calm, uncluttered spaces that offer a place for passengers to relax, away from the stress of their long journeys. An internal zen garden with a sitting Buddha statue adorns at one end of the passenger concourse.

The glass structure of the terminal opens up the interiors visually towards the panoramic scenic site of the Himalayas. The terminal building has acquired a vibrant character as its glass envelope reflects the landscape imagery.

The interiors of the building depict local handicrafts, murals & tourist destinations. Pakyong Airport would not only promote tourism, open up opportunities for the Sikkimese people and bring in an era of economic development, but will also provide airlift during emergencies and disasters and will also give a boost to the connectivity of the state with flights to and from Kolkata and Guwahati.